Now, Farah and Sonu have teamed up for the recreated version of the 90s hit song Tum To Thehre Pardesi. The song also features Nidhhi Agerwal, and they have started shooting for it in Chandigarh, India.

Sonu took to Twitter to share a picture from the sets. He tweeted, “Creating some magic together @TheFarahKhan @AgerwalNidhhi with @DesiMusicFactry.”

Farah also posted a picture on Instagram, and wrote, “All things Punjabi.. Chandigarh, tractors & @sonu_sood ❤️ shooting with u my friend is always such fun.. @desimusicfactory.” 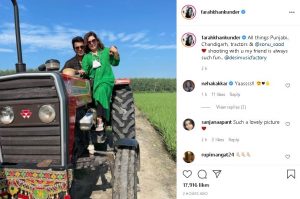 The song is recreated by Tony Kakkar and it will be out on Desi Music Factory’s YouTube channel on Sonu Sood’s birthday, 30th July 2021.

While talking about the song, Sood told Spotboye, “I play a farmer in a village of Punjab who turns out to be a cop. So there’s humour and action. And there is also a cute love story tucked away in the song. With Farah around to direct it is always fun. So I am looking forward to the shooting every day.”

Talking about Sonu’s movies, the actor will be seen in films like Acharya (Telugu), Prithviraj, and Thamilarasan (Tamil). Prithviraj, which also stars Akshay Kumar and Manushi Chhillar, is slated to release on Diwali this year.