Husnain Masood, 18, said that he believed if he appeared to be a credible threat police would shoot him. 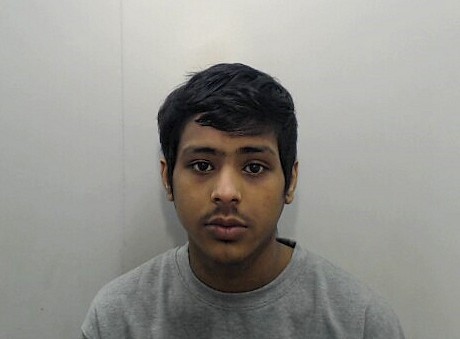 A teenager from Rochdale has been sentenced to 14 months detention in a Young Offenders Institute at Minshull Street Crown Court for a bomb hoax and possessing weapons.

Husnain Masood, 18, pleaded guilty to two counts of possessing a bladed article, possessing an imitation firearm with the intent to cause fear of violence, and launching a bomb hoax.

Earlier, he claimed that the horrifying incident on April 21, 2002, was a ‘suicide attempt, not an act of terror’.

Police received a call from a phone box in Rochdale on April 21. The caller revealed he saw a man with a gun placing a bag with wires coming out of it under a bus stop on Dane Street.

Police arrived and confirmed that a bag matching the caller’s description was present at the spot. After deciding that a cordon should be put in place, the Army Explosive Ordinance Disposal Unit was contacted.

When one officer was waiting in his car for the explosives specialists to arrive, Masood knocked on the window. The officer glanced up to see Masood dressed entirely in black and wearing a balaclava.

When his colleague noticed Masood holding a knife, he warned the officer. The teen then turned his attention to the officer who had issued the warning and began chasing him, shouting that he would shoot him; other officers came to his aid. They noticed wires coming from his clothing and what appeared to be the butt of a gun in his hand.

Masood was apprehended using a taser and incapacitant spray. He was seen throwing a knife in a nearby grid during the chase, which was later recovered. He was found with a second smaller knife and three notes, one of which stated, ‘this is a suicide attempt, not an act of terror.’

The Army Explosive Ordinance Disposal Unit detonated a controlled explosion on the device. It was later discovered to be unfeasible.

Masood said that he had no desire to hurt anyone when questioned. He asserted that he thought armed cops would shoot him if the authorities thought he posed a genuine threat.

He planted the bag under the bus stop, making it obvious by having wires hanging out, and expected armed police to be called. He then called the police himself via the phone box.

He approached the police and said, “Shoot me.” Police said that the teenager was apologetic for frightening the officers but had no intention to harm anyone else. Masood hoped a black candle lighter would be considered as a gun.

A police officer said in his victim impact statement: “I was appalled by the incident. This man truly instilled in me a fear of death and catastrophic injury. I was also terrified because I thought I couldn’t defend my friends and colleagues.”

“Masood’s activities caused a significant deal of concern, not to mention the expenditure and time of the police and bomb disposal professionals who could have spent that time more effectively,” said Joanna Crook, Senior Crown Prosecutor for CPS North West.

“When the police met with Masood, he acknowledged his behaviour and apologised for what he had done. The police officers who dealt with incident showed great bravery in the face of a very serious incident.”