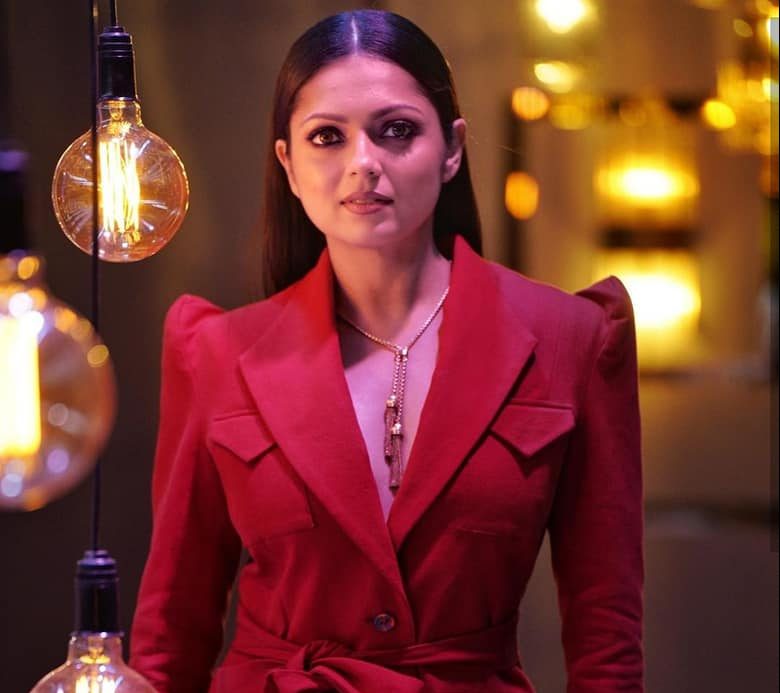 TELEVISION superstar Drashti Dhami made a stunning leap to the streaming site space with historical Hotstar drama serial The Empire and showed quite comprehensively that she is one of the finest performers in India today.

That stunning turn as warrior queen Khanzada has delighted audiences around the world and set the supremely talented actress up for an exciting new phase in her career. It is the latest chapter in an extraordinary journey that has included some of the most beloved drama serials on Indian television.

Drashti was in good spirits when Eastern Eye caught up with her to discuss The Empire experience, future plans, huge fan base, acting and lockdown life lessons. She peppered each answer with her infectious energy and also spoke about her friendship with actress Sanaya Irani and inspiring approach to life.

You’re very selective about the projects you take on. What did you like about The Empire?
I think it was a no-brainer to be very honest. The way Nikhil (Advani) sir explained my character and told me how they are planning to shoot the entire series, I think any person in my place would want to do this show. I was lucky that I got this opportunity, and of course, when it came out I still don’t think anything better could have happened.

What was the biggest challenge of playing this role?
The biggest challenge, honestly, for me was the language because it was a lot of Urdu and I’m not used to speaking it. The whole journey was challenging because I went very unprepared on set. I wasn’t aware of what exactly I’m supposed to do, but I think every time I went on set, I kept learning new things about my character. By the end of it, I was actually living Khanzada.

How much do the positive reviews mean to you?
First, I must tell you. I love reading what you write about me, Asjad. It really means a lot and puts a big smile on my face. Of course, who doesn’t like compliments. The great thing about this show is that people who have not been in touch for a long time, such as school friends, relatives, family friends, my friends who moved to the US and their parents, who I haven’t spoken to for so many years, all messaged me about how they liked my acting in The Empire and how I played Khanzada. That really means a lot and made me very happy.

You remain unpredictable. What is the plan going forward?
I don’t know! I am actually in a very unpredictable state right now. I’m just receiving messages from people, comments about the show and the reviews. I am eager to see what is waiting for me in the future. What kind of roles and shows I am going to get? I am actually open to everything. I want to see what it is and definitely want to do some great content.

What about films?
I don’t know. I still stick to the same thing that I have been saying for so many years – films are something I’ve not really thought about. Like I said, I’m really unaware right now of what the future holds for me. I guess it’s just a wait-andwatch situation for me.

Is the biggest challenge for you to find a character that satisfies you?
Oh, definitely! I think right now the problem is to figure out what I want to do next, which is the most difficult thing after doing something so great. So, you want to think twice before taking up anything else.

What about working in the West?
I really haven’t thought about it yet, but of course, if I get some calls from the West, I’m more than happy to explore that option.

Is there a character that you would love to portray?
I would definitely like to do some action or a thriller kind of thing. I want to do something that I’ve not portrayed before.

We see on social media that you have been lifting a lot of incredibly heavy weights and are in the best shape, so action would suit you…
(Laughs) Yeah, I know. I was asked what do you want available for women? I said something action-based because it’s a lot of fun to do that.

If you could do a biopic, is there a reallife character you’d love to play?
I haven’t really thought about it, but this is something that I should think about. I will let you know, Asjad.

A lot of people look at the fact that you’re really beautiful and a big star, but for me you are a great actress. How do you approach a performance?
Honestly for me, acting is something genuinely that I can only do in front of the camera. I have difficulties doing rehearsals and performing, until the time I don’t hear the word ‘action’. When the cameras are not rolling, I don’t know, somehow, I can’t perform, but the minute I know that ‘okay, this is the moment and the final action is happening’, is when all the emotions or whatever is required in the scene just keeps flowing out of me. I’m not a method actor and that’s something I would love to learn. But the problem is I can’t do takes a lot of times because I don’t think I can sustain and hold what I’m supposed to do in a scene. But I guess that is also why it comes out naturally when I do it because I don’t rehearse.

What’s the biggest life lesson your work has taught you?
I guess the only thing that I’ve kept saying, even before, is let your work speak and I feel like my work has really spoken after this show.

How has lockdown and living through the pandemic been for you?
Initially, I didn’t know the lockdown was going to go on for this long, so I was kind of doing everything with the family. First, we thought lockdown is just for 15 days, so we would cook and watch Netflix all day. Eventually we realised that this pandemic is not going anywhere. There was a point where I kept thinking, what am I doing in this lockdown? I always felt that I should get a little creative and explore something new. But honestly, it didn’t work! I couldn’t do anything creative but got very regular with my workouts. That was one thing in the day I would look forward to. I have cooked, worked out and binge watched TV.

What about working during lockdown?
A lot of people were out of work in the pandemic and striving to figure out what they want to do in their lives. A lot of businesses shutdown. I think The Empire was really a ray of hope for me because I signed for it and started shooting before the pandemic started. When things started opening up, we resumed shooting. I think everyone was so excited to get back and worked double hard because we were all grateful to be on set again and wanted to see this happen. Everyone’s hard work is why The Empire has turned out so well.

You have also spent time with actress Sanaya Irani. Your friendship has become legendary. What keeps you both connected?
Just the fact that we both are very honest and truthful with each other when it comes to our friendship. I think there are some bonds that just last forever, right? Like we’ve been friends for I think 20 years. I think a good relationship is only possible if you’re just honest and true to your friendship and that’s why we’ve survived. If we don’t like something, we’re very honest about it.

You have mastered acting and lifting incredibly heavy weights. If you could master something new, what would it be?
I actually want to get back to dancing. It’s been on my mind for a while now and that’s something, definitely, I’m going to get back to. I think after (reality show) Jhalak Dikhhla Jaa, I have completely lost touch with dancing. I want to really get back to it and master it once again.

What inspires you today?
So, what inspires me is that life goes on. There are ups and downs, but at some point, when you hit the rock bottom, you will always come up and that’s what I kept following. That’s what’s inspired me all this while.

You’ve got the most incredible fanbase. Would you give them a message?
All I want to say is I’m really grateful and so blessed to have so many people all around the world to celebrate and live this journey with me. The excitement of when they saw the first trailer of The Empire and the way I could see their response, just makes me feel really blessed. Guys, thank you so much. I am whatever I am today because of you guys. Keep loving me and keep showering all your blessings on me.

Why do you love being an actress?
I love facing the camera. I feel like I get to live so many lives that normal people don’t get to, get into the skin of so many different characters and that’s something I totally enjoy. (Laughs) Of course, I like looking good every single day when I’m in front of the camera.