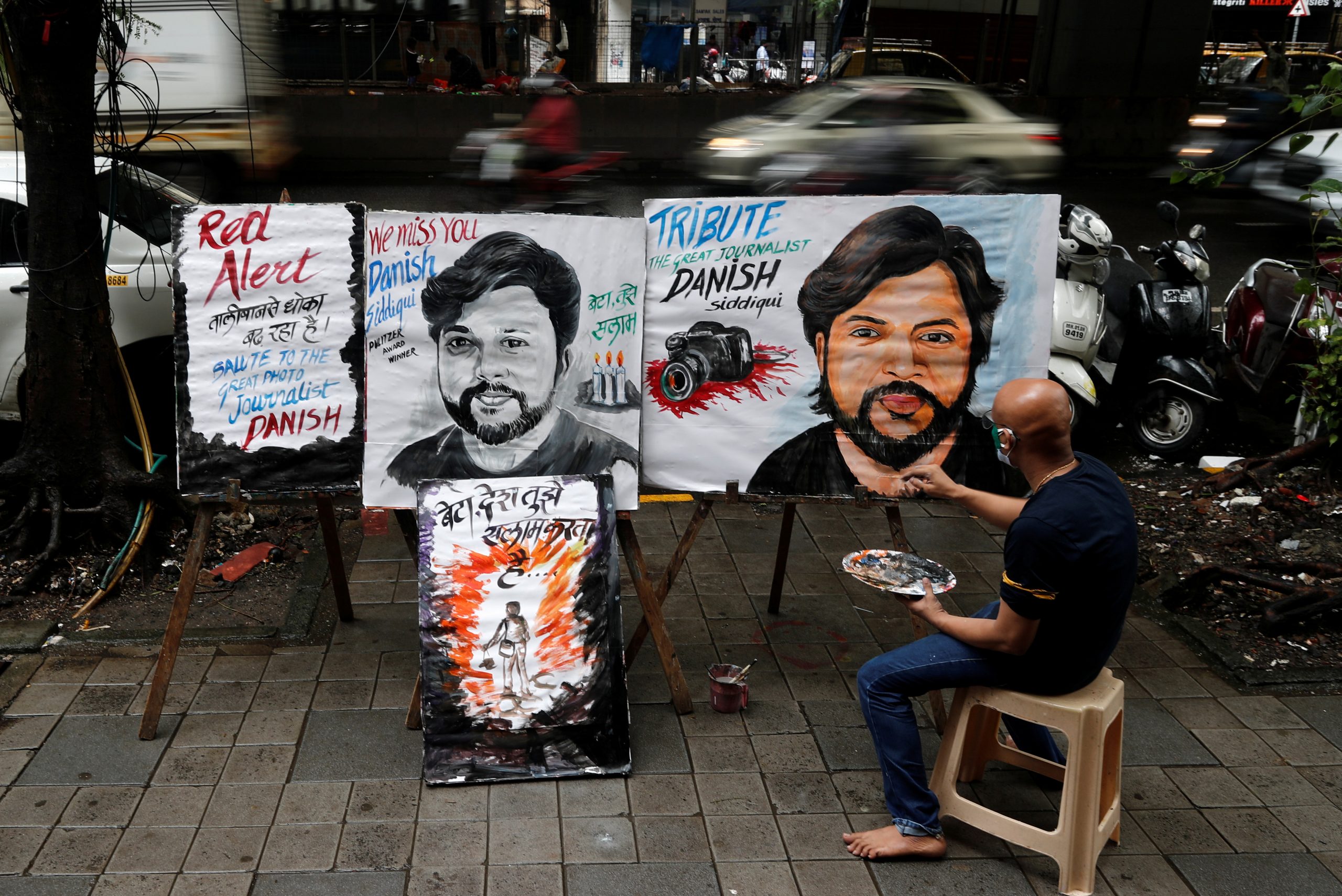 An artist applies finishing touches to a painting of Reuters journalist Danish Siddiqui, after he was killed while covering a clash between Afghan security forces and Taliban fighters near a border crossing with Pakistan, outside an art school in Mumbai, India, July 16, 2021. REUTERS/Francis Mascarenhas TPX IMAGES OF THE DAY

Danish Siddiqui, the Reuters journalist killed in crossfire on Friday (16) covering the war in Afghanistan, was a largely self-taught photographer who scaled the heights of his profession while documenting wars, riots and human suffering.

A native of New Delhi, Siddiqui, 38, is survived by his wife Rike and two young children.

He was part of a team that was awarded the Pulitzer Prize for Feature Photography in 2018 for documenting Myanmar’s Rohingya refugee crisis, a series described by the judging committee as “shocking photographs that exposed the world to the violence Rohingya refugees faced in fleeing Myanmar.”

Friends and colleagues described a man who cared deeply about the stories he covered, carrying out meticulous research before embarking on assignments and always focusing on the people caught up in the news.

“Even in breaking news cycles he would think about humanizing a story, and you see that so often in his pictures, including those that won the Pulitzer and stories we have done in the last few years,” said Devjyot Ghoshal, a Reuters correspondent based in New Delhi and a neighbour of Siddiqui.

“Covering the Delhi riots together and the COVID-19 pandemic more recently – his most compelling images were about people, isolating the human element.”

A Reuters photographer since 2010, Siddiqui’s work has spanned wars in Afghanistan and Iraq, the Rohingya crisis, pro-democracy protests in Hong Kong and unrest in India.

In recent months, his searing photographs capturing the coronavirus pandemic in India have spread across the world.

“Ninety percent of the photography I have learnt has come from experimentation in the field,” Siddiqui once wrote.

“What I enjoy most is capturing the human face of a breaking story. I shoot for the common man who wants to see and feel a story from a place where he can’t be present himself.”

Ahmad Danish Siddiqui was born on May 19, 1983. He became a journalist after a Master’s degree in Mass Communications from Delhi’s Jamia Milia Islamia University.

Siddiqui joined Reuters after stints as a correspondent with the Hindustan Times newspaper and the TV Today channel.

Last year, while covering sectarian unrest in a Delhi suburb, Siddiqui and Ghoshal saw a Muslim man being beaten by a frenzied Hindu mob.

The images were widely featured in international media, highlighting the danger of wider conflagration between India’s Hindu majority and sizeable Muslim minority. Siddiqui, a Muslim, had a narrow escape when the mob turned their attention on him.

Those photographs were part of a selection of Reuters pictures of the year in 2020.

Siddiqui provided video and text from his assignments as well as photographs.

On his final assignment, he was embedded with Afghan special forces in the city of Kandahar.

Earlier this week he was travelling with a convoy of commandos when it came under heavy fire from Taliban militants on the outskirts of Kandahar. He captured the drama n pictures, film and words.