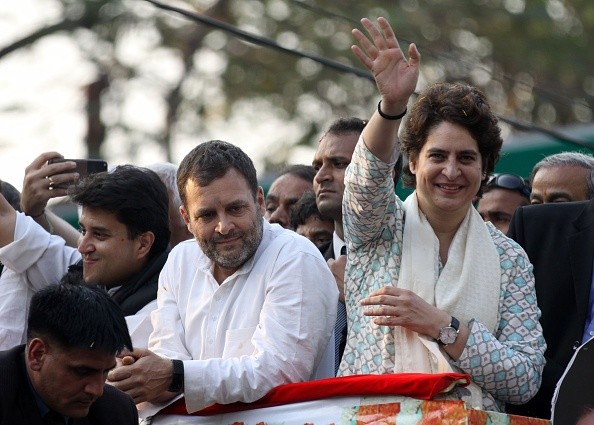 Raising the Rafale issue, Rahul said Modi was attempting to convert the whole country into chowkidar after being “caught”, while Priyanka said chowkidar are only for the rich not the poor.

“Unki (Prime Minister) marzi apne naam ke aage kya lagaen. Mujhe ek kisan bhai ne kaha ki ‘dekhiye chowkidaar toh ameeron ke hotey hain, hum kisan toh apney khud chowkidaar hotey hain (“It is up to him what prefix he uses in his name. Yesterday I met a group of farmers. One of them told me, chowkidars are for the rich. We farmers are our own chowkidars),” Congress general secretary Priyanka said.

She was speaking after kicking off the election campaign in eastern Uttar Pradesh with her ‘Ganga Yatra’ on boat.

Rahul, who has been targeting the prime minister with “Chowkidar chor hai” (watchman is a thief) jibe alleging corruption in Rafale fighter jet deal, said, “Chowkidar was caught indulging in theft and as he was caught, chowkidar says the whole of Hindustan is chowkidar.”

“But before getting caught, the entire Hindustan was not chowkidar,” said Gandhi.

The prime minister had in his election rallies said that he would work as a watchmen against the corrupt.

Rahul and his sister stepped up the attack a day after BJP intensified its “Main bhi chowkidar” (I too am watchman) campaign to counter the Congress’ offensive, with Modi and other party leaders, including its president Amit Shah prefixing the word chowkidar to their names in their Twitter profile.

“If the documents become part of inquiry, Modi and Ambani would go to jail. Why is he not having an inquiry? That’s why this campaign ‘Chowkidar Chor Hai’…,” Gandhi said on Rafale.

He claimed he could give a list of defence contracts that Anil Ambani and “Modi’s friends have been given, one after the other, and they have only got caught on Rafale, which happens to be the really big contract in the world. So that’s why everybody is saying chowkidar chor hai.”

Addressing public meetings, Modi had alleged that the corrupt were having sleepless nights and had targeted the opposition saying they were coming together against him as he was working as a watchman for the country.

The prime minister on Saturday (16) urged his supporters to take the ‘main bhi chowkidar’ (I too am watchman) pledge, saying he is not alone in the fight against graft and social evils.

“Your Chowkidar is standing firm & serving the nation. But, I am not alone. Everyone who is fighting corruption, dirt, social evils is a Chowkidar. Everyone working hard for the progress of India is a Chowkidar. Today, every Indian is saying-#MainBhiChowkidar,” he wrote on Twitter.