Nick Kyrgios reached his first Grand Slam semi-final on Wednesday, overcoming Cristian Garin in front of a harsh crowd on Court No. 1 at Wimbledon. 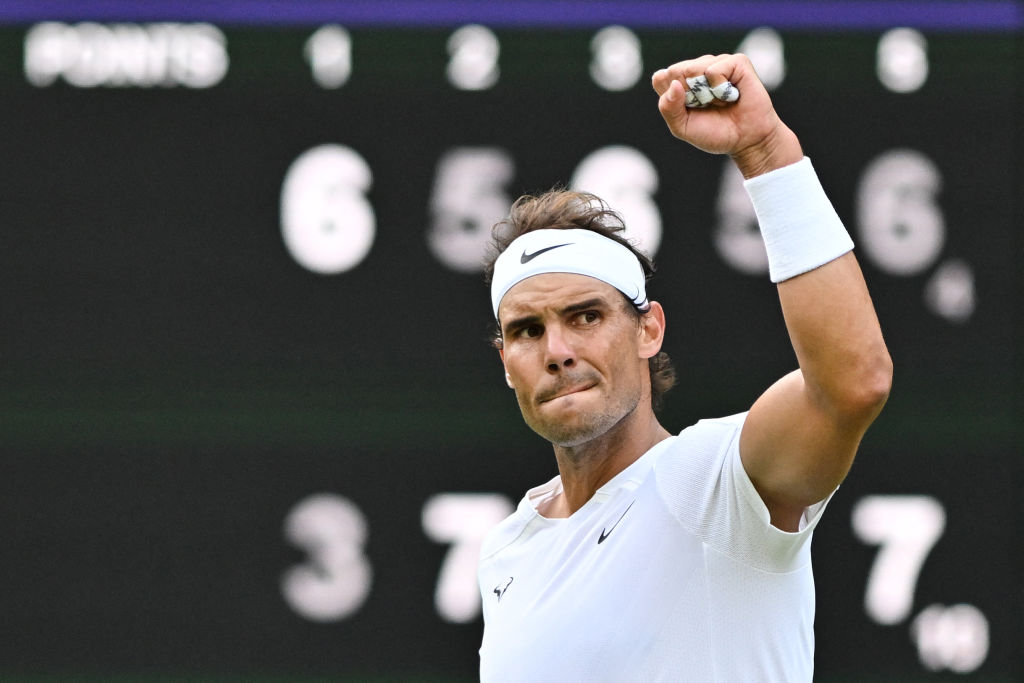 Two-time Wimbledon champion Rafael Nadal has pulled out from the competition due to an injury.

The No.2 seed was set to face Nick Kyrgios of Australia in the Men’s semi-final on Friday, but an abdominal tear led to him announcing his withdrawal from the event. With this, Kyrgios has advanced to the finals where he would take on either Serbia’s Novak Djokovic or the British player Cameron Norrie.

Earlier, Rafael Nadal produced another dramatic show on Wednesday at Wimbledon, where the Spaniard held off a high-powered performance from Taylor Fritz to reach the semi-finals in London.

The second seed showcased trademark strength, increasing his aggression to keep points short and delivering a high-class deciding-set tie-break to seal a 3-6, 7-5, 3-6, 7-5, 7-6(10-4) victory.

The 22-time major champion Nadal left the court for a medical timeout in the second set and seemed to be struggling with an abdominal problem midway through the pair’s four-hour, 20-minute quarter-final clash.

On the other hand, Nick Kyrgios reached his first Grand Slam semi-final on Wednesday, overcoming Cristian Garin in front of a harsh crowd on Court No. 1 at Wimbledon.

Kyrgios overpowered Garin 6-4, 6-3, 7-6(5) with his thunderous ball hitting, while he also showed great touch from all areas of the court to gain the most significant win of his season after two hours and 13 minutes.

‘The Godfather’ star James Caan passes away at 82 – ANI

Late veteran star James Caan, whose Oscar-nominated portrayal as Sonny Corleone, the wildly hotheaded son of Marlon Brando’s Mafia don in “The Godfather,” would be remembered for as long as there are gangster movies, died at the age of 82 on Wednesday.

“It is with great sadness that we inform you of the passing of Jimmy on the evening of July 6,” the tweet reads. “The family appreciates the outpouring of love and heartfelt condolences and asks that you continue to respect their privacy during this difficult time.”

According to Variety, Caan also had notable roles in films including “Misery,” “Elf,” “Thief,” “Godfather Part II,” “Brian’s Song” and “The Gambler.”

Sonny’s violent end in Francis Ford Coppola’s “The Godfather” riddled, as he is, with dozens of bullets is one of the most memorable scenes in a film filled with them.

Caan auditioned for the role of Michael, the college-educated war hero son who would eventually become Don, and the studio, Paramount, initially backed this casting; Al Pacino was cast as Michael and Caan as Sonny as part of a convoluted compromise between Paramount and Coppola.

The young Caan first worked on the stage and made his Broadway debut in “Blood, Sweat and Stanley Poole,” starring Peter Fonda, in 1961. He began making guest appearances on series including “The Untouchables,” “The Alfred Hitchcock Hour,” “Ben Casey” and “Dr Kildare.” He appeared as a thug in the Olivia de Havilland thriller “Caged” in 1964 but first came to notice playing John Wayne’s young sidekick in Howard Hawks’ 1966 Western “El Dorado.”

Caan starred with Robert Duvall in Robert Altman’s little-remembered space exploration drama “Countdown” (1968) (of course the pair would reunite three years later for “The Godfather”) but more importantly starred with Shirley Knight in Coppola’s odd little road movie “The Rain People” (1969) before “Brian’s Song” and “The Godfather” changed his life.

James Edmund Caan was born in the Bronx. He attended Michigan State University (where he played football) and Hofstra University. Francis Ford Coppola was among his students at the latter. He attended Sanford Meisner’s Neighborhood Playhouse School of Theater in New York.

He was married and divorced four times, once to Dee Jay Mattis, once to Sheila Ryan, once to Ingrid Hajek, and once to Linda Stokes. He is survived by Tara A. Caan, daughter of Mattis; son Scott, an actor; son Alexander James Caan, son of Hajek; and sons James Arthur Caan and Jacob Nicholas Caan, sons of Stokes.