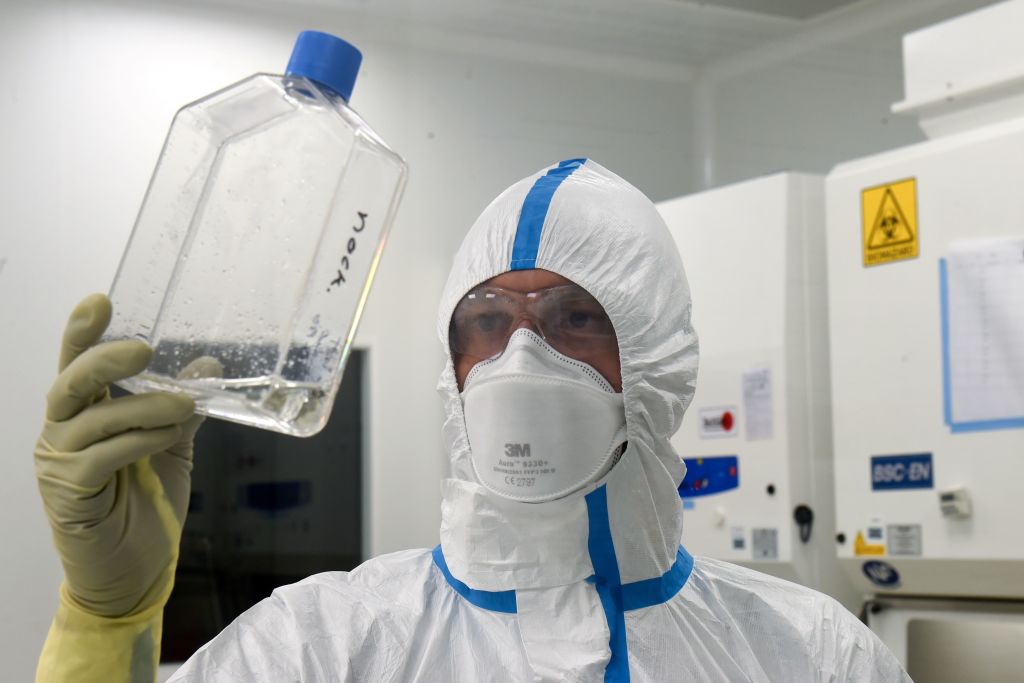 A scientist looks at a flask containing a Sars-CoV-2 virus at a lab in France. Just seven months after the outbreak of the pandemic, and even before clinical trials of experimental vaccines have ended, some developed countries have reportedly put in orders for at least 3.1 billion doses of various candidate vaccines. (Photo: JEAN-FRANCOIS MONIER/AFP via Getty Images)
Follow Us

RICHARD HATCHETT, the head of the Coalition for Epidemic Preparedness Innovations (CEPI), is worried.

His job is to ensure that future vaccines against Covid-19 will be shared on an equitable basis around the world, but the US, Europe and other rich countries have already reserved the first doses for themselves.

Just seven months after the outbreak of the pandemic, and even before clinical trials of experimental vaccines have ended, some developed countries (the US, Britain, the European Union, Canada and Japan) have reportedly put in orders for at least 3.1 billion doses.

US President Donald Trump blazed this particular trail: His administration signed contracts guaranteeing at least 800 million doses from six manufacturers for a population of 330 million, to be delivered starting at the end of the year for some of the doses.

“The US is potentially in a situation of oversupply if all of the vaccines that they’ve invested in are successful,” Hatchett told AFP in an interview from London.

The American said he understood national leaders are serving their own people as a priority, but called on Washington to behave like a global leader and share its doses with other countries.

“What we need to persuade global leaders is that as a vaccine becomes available in these initially limited quantities, it needs to be shared globally, that it shouldn’t be the case that just a handful of countries get all of the vaccine that is available in the first half of 2021,” said Hatchett, who wants at all costs to avoid the scenario of 2009, when rich countries managed to bag the first vaccines of the H1N1 flu.

“I am concerned about it,” he told AFP.

An initiative named Covax and backed by the World Health Organization, as well as CEPI and the global vaccine alliance group Gavi, aims to buy and equitably distribute two billion doses in 2021. Ninety-two developing countries and 80 developed countries have signed on, and the European Union on Monday announced a contribution of 400 million euros.

But the US is refusing to join the effort.

“We will not be constrained by multilateral organizations influenced by the corrupt World Health Organization and China,” said White House spokesman Judd Deere on Tuesday (1).

Covax has only managed to secure 300 million doses to date from AstraZeneca, the pharmaceutical group that also signed separate partnership deals with the US, Europe, Russia, South Korea, China, Latin America and Brazil. Novavax, a US biotech company, says it has formed a partnership with an Indian group to produce up to a billion doses of its potential vaccine in India.

CEPI’s negotiations, mainly funded by public and private donations, including from the Gates Foundation, are “ongoing” with other laboratories, but no deal has been announced, not even with the US firm Moderna, in which CEPI invested very early.

The several million dollars given to Moderna are no match for the $2.5 billion invested subsequently by the US government.

“While we have stayed in close touch with Moderna… for that small scale early stage agreement, you can’t have those kinds of commitments,” said Hatchett.

The ideal goal for the WHO is that every country receives vaccinations for 20 percent of its population, starting with the most vulnerable people no matter what their nationality, including health workers.

Despite the competition, Covax hopes that with 172 members, the initiative will be able to negotiate good prices.

“That’s one of the reasons that we are asking countries to now make their commitments to the facility so that we know on behalf of how many countries we’re negotiating,” said Hatchett. “The more countries that negotiate together, the stronger the purchasing power, and the easier the price.”

But the European Union is striking its own accords with laboratories, with 1.3 billion doses already acquired, and has not yet said if it will use the WHO facility.

In the longer term, Hatchett says that CEPI still has to raise between $700 and $800 million remaining of the $2.1 billion needed to continue the vaccine research, because there is no guarantee that any of the vaccines currently under development will actually work.