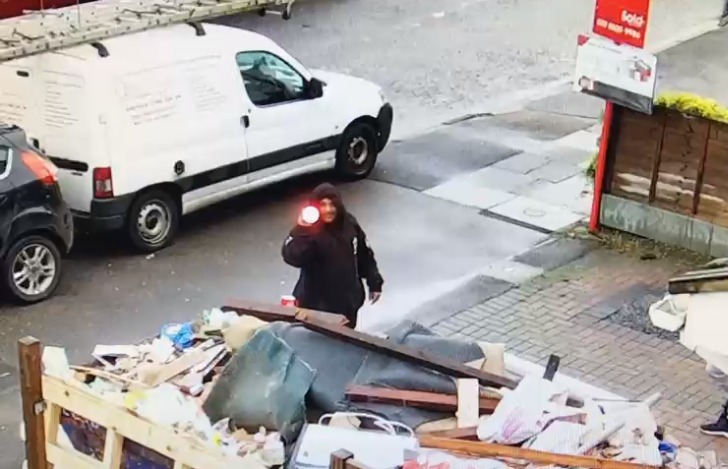 Singh pointing a laser pointer at his neighbour’s windows.

A police officer in a feud with his Ilford neighbours told an Asian woman to “go back to [her] village” and called the couple “rodents”.

A misconduct hearing last week concluded former police constable Valmeekee Singh would have been sacked for his behaviour if he was not already dismissed for unrelated reasons a month earlier.

On 12th July, the panel heard Singh was in an “ongoing dispute for a number of years” with his neighbours, who accused him of harassing them, both verbally and on Whatsapp.

Singh accepted his behaviour was “not in keeping” with police standards but argued it was only “misconduct”, as opposed to “gross misconduct”, because he was “provoked”.

In footage taken on 22nd November 2019, he can be heard saying: “Go back to your village, that’s your mentality, you’re like rodents mate, after I’ve been nothing but nice to you.”

During that year, Singh sent his neighbour “threatening and abusive” messages over Whatsapp, “negatively referring to him and his family members” and “calling him a coward”.

He was also removed from a Whatsapp group for local residents after claiming the couple were “misfits” and “delusional” because he wrongly believed they had reported his Range Rover to the police.

The pair felt Singh’s comments were racial discrimination, despite him also having Asian heritage, because of comments such as “you can’t even speak English properly”.

However, Singh told the panel he had “received verbal diatribes” from this neighbour in turn and insisted the couple provoked him by refusing to move a camera on their property.

He told the panel: “I do not believe I ever said ‘go back to your own village’ […] if there’s footage of that then I do not remember saying it and, if there’s no footage, then it’s only her word.”