Pandemic has led to surge in stress levels for doctors’ 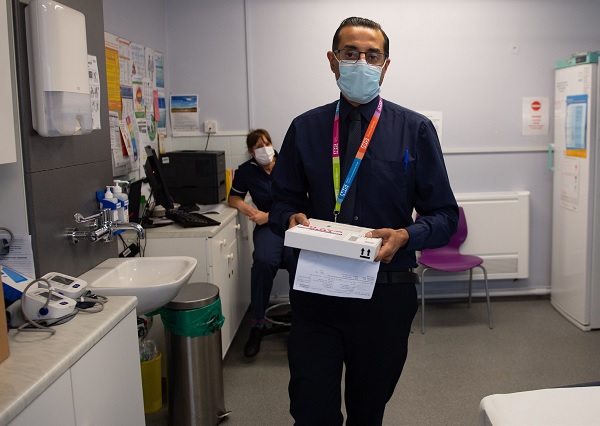 Doctors have been stretched to their limits in the past one year, working long hours with increasing patients (Photo: Jacob King/WPA Pool/Getty Images).

BRITISH Asian doctors have re­vealed the impact the Covid cri­sis has had on their stress levels and how the support of their family has helped them cope.

They have disclosed how their workload and patient numbers have increased since the pan­demic began and how they are supporting colleagues to boost their mental health.

Dr Adrian James, president of the Royal College of Psychiatrists, earlier this month called for NHS staff and patients to be monitored for post-traumatic stress disorder (PTSD) in the aftermath of the pandemic. He warned that be­tween a third and a half of people who had been ventilated in hos­pital as a result of Covid experi­enced symptoms of PTSD along with 20 per cent of staff working in intensive care.

Dr Chandra Kanneganti, a GP in Stoke, Staffordshire, told East­ern Eye: “It was stressful in the sense of seeing patients who you known for years pass away in front of your eyes. It is distressing.

“Never have we seen so many calls with mental health prob­lems, anxiety, depression, feeling suicidal, there is a different epi­demic of mental health building because of Covid.

“Being busy is the only way for me. I haven’t had any holidays which is not the best way.

“If I am sitting at home I am worrying about my patients.

“When working from home I spent more time with my family and three boys. That has really helped me and kept me going – it is my cure.”

Frontline19.com is a website which offers free counselling ser­vices to NHS and frontline staff. They are currently helping around 1,800 people a week.

Dr Kanneganti added: “I am the lead on Practitioner Health Programme which sup­ports doctors with mental health and have seen more cases than ever before.

“The gov­ernment has given us re­sources for counselling, (such as NHS) Talking Thera­pies. The work­load is m o re among all my colleagues. We haven’t taken a day off since the pandemic. We are working extra time on vaccines; we enjoy that part, that is the answer for us.

“We are supporting each other and have a helpline for counsel­ling and for someone to talk to.”

Meanwhile, recent research found that a quarter of NHS workers are more likely to quit their job than a year ago, due to frustrations over their pay, un­derstaffing and burnout.

The poll, by the IPPR think­tank, includes 29 per cent of nurses and midwives. It means as many as 330,000 staff could quit, the IPPR said.

Dr Chaand Nagpaul, the Brit­ish Medical Association’s council chair, told Eastern Eye: “The last year has seen doctors being stretched to their limits, working long hours in often unfamiliar settings as they continue to fight the pan­demic on the front line, all the while fearful for their own safety.

“Many have come face-to-face with death on a scale they were completely unprepared for, which in too many cases included witnessing their friends, family and colleagues tragically losing their lives to this awful virus.

“Now the NHS faces its biggest backlog of treatment ever it’s cru­cial the safety and wellbeing of staff are prioritised, allowing them respite and time to recover.”

Mohammed Abbas Khaki, a doctor in London, said: “Since Covid started I’ve helped in Covid wards, assessment hubs and home visiting services. I’m part of a covid task force and steering groups. We’re exhausted. We cry in breaks and break down when we get home. We get sick. We’ve lost friends and can’t risk seeing loved ones. But we still turn up to pro­tect you and always will. Help us by following the rules.”

Black and Asian staff represent 21 per cent of the NHS workforce, but analysis showed they ac­counted for 63 per cent of Covid deaths among health and social care workers, according to re­search published in the British Medical Journal in January.

The Department of Health and Social Care said it has put £15m into dedicated staff mental health support and launched a 24/7 hel­pline. It added there are record numbers of doctors and nurses working in NHS with nearly 10,900 more nurses and almost 6,600 more doctors compared to 2020.