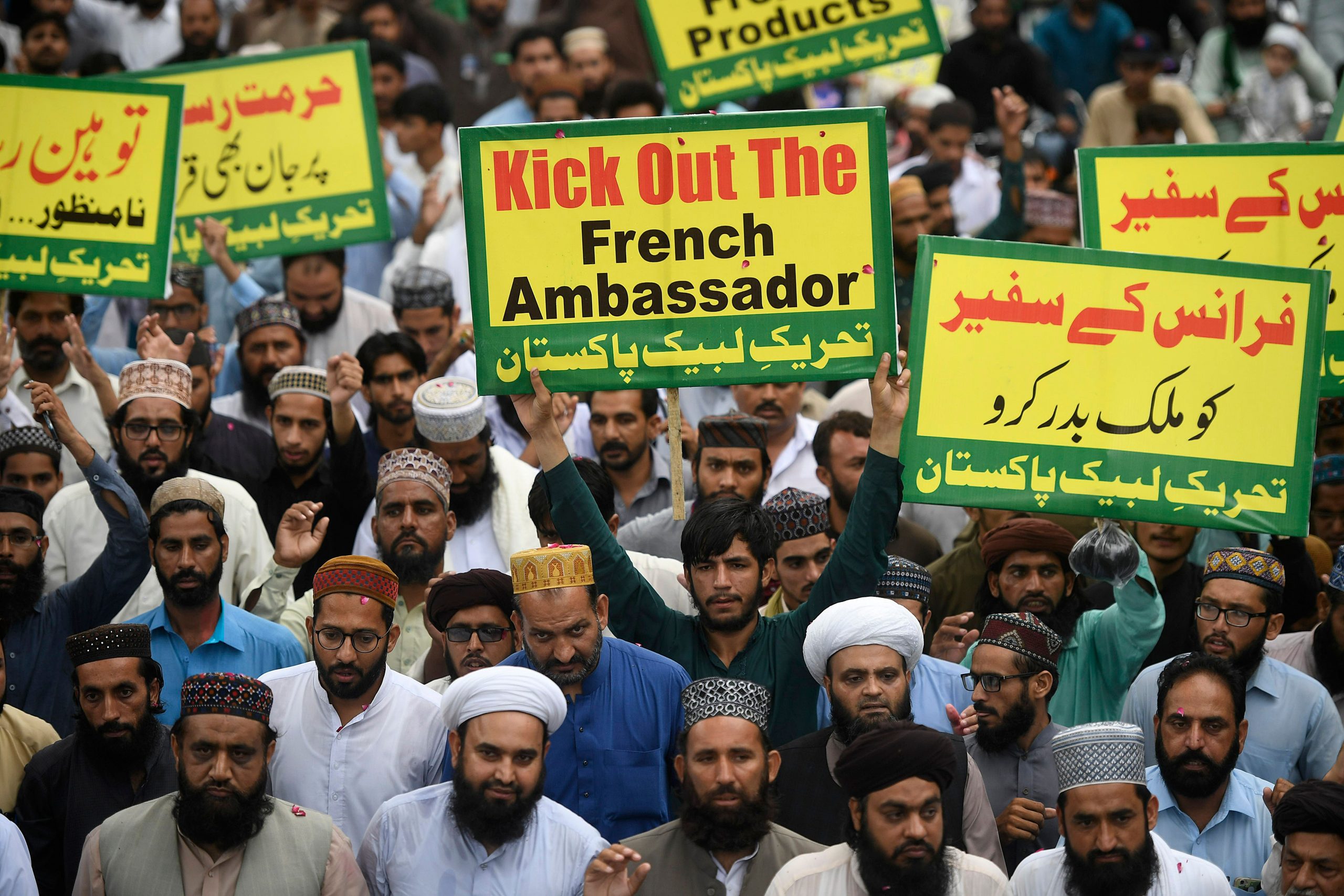 Supporters of hardline Islamist party Tehreek-e-Labbaik Pakistan carry placards and shout slogans during a protest against the reprinting cartoon of the Prophet Mohammad by French magazine Charlie Hebdo, in Rawalpindi on September 4, 2020. – Satirical weekly Charlie Hebdo, the target of a massacre by Islamist gunmen in 2015, reprinted the controversial caricatures this week to mark the start of the trial of the alleged accomplices in the attack. (Photo by Aamir QURESHI / AFP) (Photo by AAMIR QURESHI/AFP via Getty Images)
Follow Us

A Pakistani Islamist party on Tuesday (17) called off an anti-France demonstration on its third day, after securing the release of protesters arrested following clashes with police.

Ultra-conservative Pakistan has seen scattered protests since French president Emmanuel Macron defended the right to criticise Islam as part of freedom of speech, triggering anger across the Muslim world.

Up to 5,000 protesters on Sunday had attempted to reach the capital Islamabad from the nearby city of Rawalpindi, but authorities blocked their path with shipping containers.

Hundreds of protesters remained at the roadblock throughout Monday and into Tuesday morning.

The Tehreek-e-Labbaik Pakistan (TLP) which led the protest said it called off the demonstration after late night talks with the government, claiming officials had agreed to kick out the French ambassador and impose an official boycott of French products.

But a senior government official who asked not to be named told AFP that the “government has no intention of cutting diplomatic ties with any country.”

He added that the situation had been “handled accordingly” to ensure the protesters left peacefully.

The Ministry of Religious Affairs would not give details about what it said were “successful talks” with the TLP, but the government released a statement ordering the release of all activists arrested over the past three days.

The French embassy did not respond to requests for comment.

Adam Weinstein, a fellow at the Quincy Institute think tank said it was unlikely the government would move to cut ties with France, but that the episode had shown the TLP’s “growing power to mobilise without warning.”

The protests erupted after Macron defended France’s freedom of speech laws, in the wake of the killing of a teacher who had shown caricatures of the Muslim prophet to his class.

All depictions of the Prophet are forbidden by Islam.

Phone services were restored late Monday after being suspended in both Islamabad and Rawalpindi for two days, a common tactic used by authorities to prevent communication between protesters and leaders.

Blasphemy is a particularly contentious issue in Pakistan, where anyone deemed to have insulted Islam or Muslim figures can face the death penalty.

The TLP is known for violent protests over the issue. Its activists paralysed the country in 2018 following the acquittal of Christian woman Asia Bibi, who had been accused of disrespecting the Prophet Mohammed.