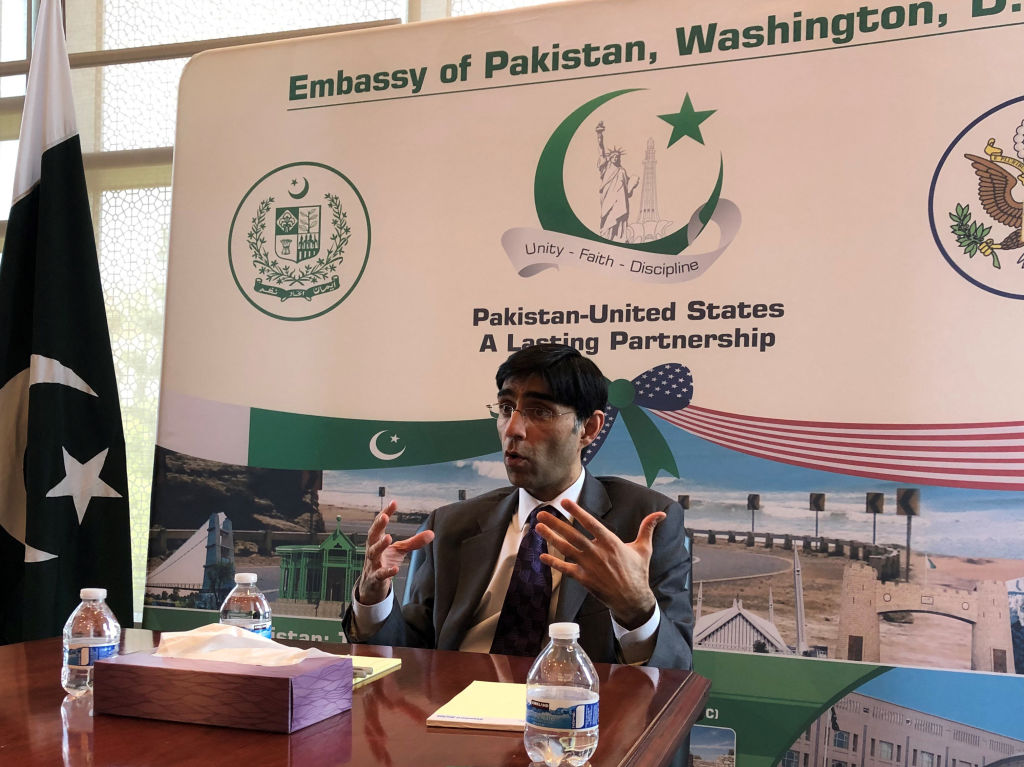 Pakistan’s national security advisor Moeed Yusuf, speaks to reporters at the Pakistani embassy in Washington on August 4, 2021 after a week of meetings with US officials. (Photo by SHAUN TANDON/AFP via Getty Images)

PAKISTAN’S national security advisor said Wednesday (4) that Afghanistan’s government and the Taliban must both compromise and reach a peace settlement as the insurgents made rapid gains amid a US troop withdrawal.

Wrapping up a week of talks in Washington, Moeed Yusuf played down the level of influence on the Taliban played by Pakistan, which was one of only three nations to recognise the hardline Islamist regime that was toppled in a US invasion after the September 11, 2001 attacks.

“We have made it absolutely clear – we will not accept a forceful takeover,” he told reporters.

“But the world also needs to be clear that the US is invested in a political settlement.”

He said the internationally recognised government in Kabul, which has strained ties with Pakistan, needs to stop looking for a military victory and needs to include a broader range of Afghans in any future talks.

Yusuf said his US counterpart, Jake Sullivan, and others in president Joe Biden’s administration did not make specific requests to Pakistan but discussed “how quickly we can get all these actors in one room to have a sincere conversation.”

He dismissed the talk of Islamabad exerting leverage over the Taliban, who are widely reported to have maintained a relationship with Pakistani intelligence.

“Whatever limited leverage we had, we used,” he said, pointing to Pakistan encouraging the Taliban to enter talks with the Afghan government in Doha.

“Now with the troop withdrawal, that leverage has logically gone down further.”

He pointed to the burden of Afghanistan’s long-running war on Pakistan, home to some 3.5 million Afghan refugees.

“We under no circumstances are prepared to see protracted instability that in the past has caused spillover into Pakistan,” he said.

Meanwhile, the US said Pakistan should keep its borders with Afghanistan open for refugees, the Dawn newspaper reported.

“So, in a place like Pakistan, it’ll be important that their borders remain open,” it quoted a senior state department official as saying.

The statement came against the backdrop of the new US refugee admission programme for Afghan nationals.