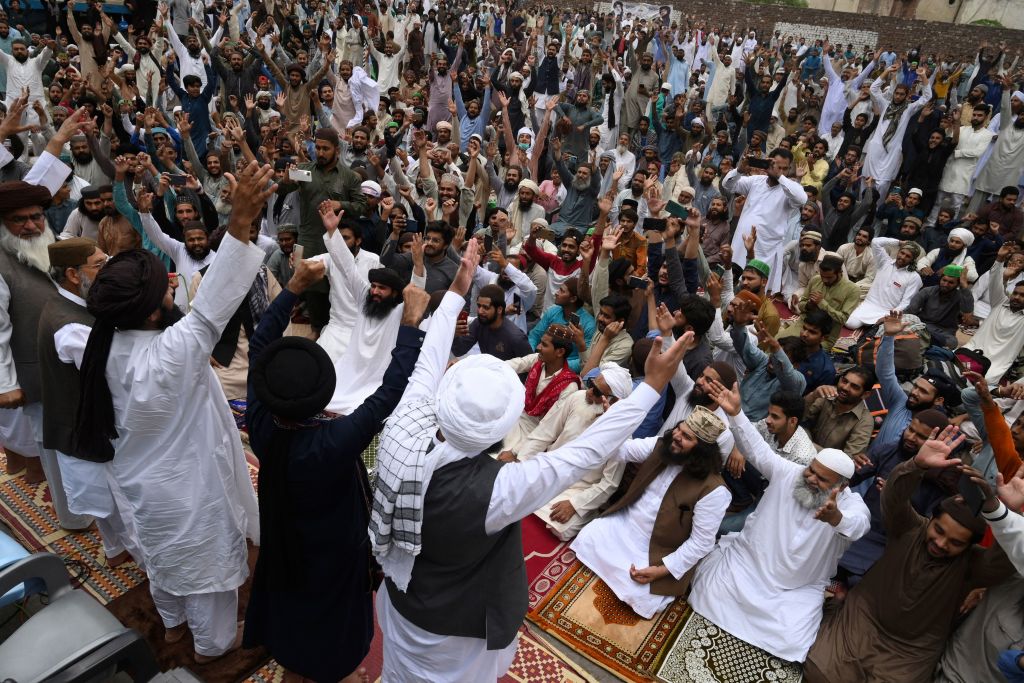 Supporters of extremist political party Tehreek-e-Labbaik Pakistan (TLP) chant slogans as they block a street during a protest after their leader was detained following his calls for the expulsion of the French ambassador, in Lahore on April 16, 2021. (Photo by ARIF ALI/AFP via Getty Images)

PAKISTAN restored Facebook, Twitter and several other social media apps on Friday (16) after blocking them for about five hours on security grounds amid a crackdown against a violent Islamist group, officials said.

Political parties frequently use social media to rally supporters, and the announcement came just before Friday prayers, which usually draw huge crowds to mosques where firebrand sermons have in the past catalysed protests.

“Access to social media applications has been restored,” the telecom authority said in a later statement.

Pakistan said this week it had banned the Islamist group Tehrik-i-Labaik Pakistan (TLP) after the arrest of its leader sparked major nationwide protests, also fuelled by anti-France sentiment.

A second security source said that the block on social media was linked to maintaining public order as an operation was underway against the group.

“As the government announced earlier…wherever we need we will be blocking social media to crack down against Tehrik-i-Labaiak,” he said, on condition of anonymity as he was not authorised to speak to media.

At least four policemen have been killed in three days of violence, according to the country’s information minister. Nearly 600 people have been wounded, with 200 in critical condition, he said.

TLP is demanding that the government expel the French ambassador and endorse a boycott of French products after the publication of cartoons in France depicting the Prophet Mohammad.

For Muslims, depictions of the Prophet are blasphemous.

The social media ban affected many Pakistanis already suffering from the fallout of the Covid-19 pandemic.

In the northwestern city of Peshawar, Eqtedar Ahmad told AFP his work as a doctor at a private hospital had been disrupted.

“We use WhatsApp for routine business — including sending lab reports to patients — and this current suspension has affected us severely,” he said.

Wamiq Haris, a 30-year-old who depends on social media to run his food delivery service in Karachi, the country’s largest city and economic hub, said orders had plummeted.

Protests had been cleared from most cities by Friday, but in Lahore hundreds of TLP supporters continued a sit-in at a religious school — and party headquarters — despite the circulation of a handwritten plea from leader Saad Rizvi to leave the streets.

Anti-French sentiment has been festering for months in Pakistan since President Emmanuel Macron threw his support behind a satirical magazine’s right to republish cartoons depicting the Prophet Mohammed.

Extra security personnel have been deployed to the French embassy — inside a guarded diplomatic enclave closed to the public — and shipping containers were placed as fortifications around its outer wall.