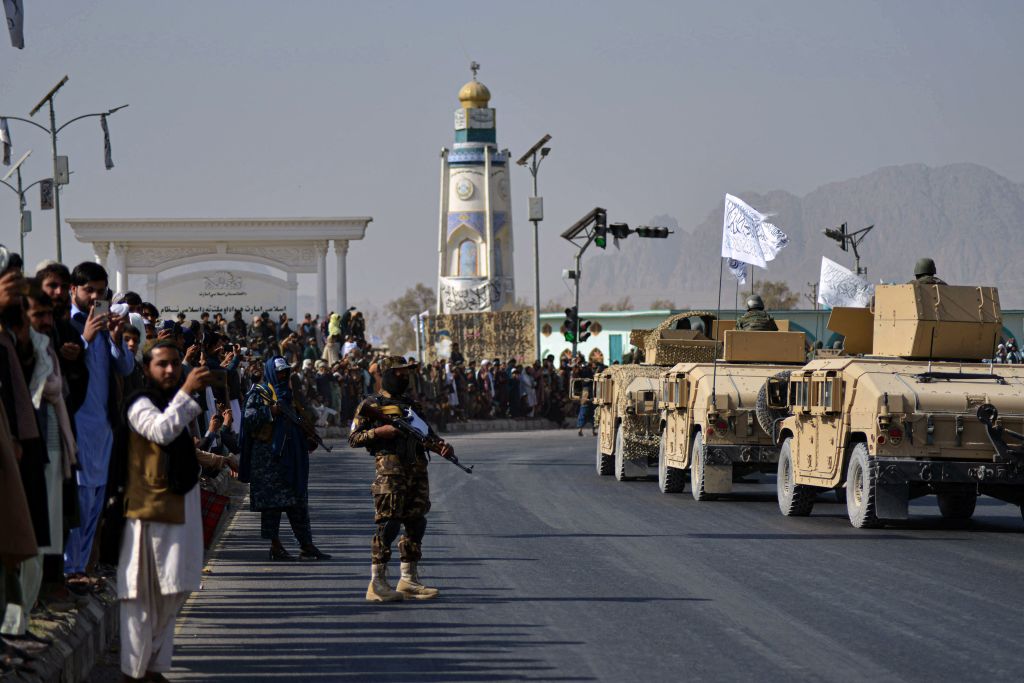 People watch a Taliban military parade of the Al-Badr unit in Kandahar on November 8, 2021. (Photo by JAVED TANVEER/AFP via Getty Images)

PAKISTAN has long played an active and disruptive and destabilising role in Afghan affairs, including its support to the Taliban, a US Congressional report said.

In the report prepared by independent subject area experts, the bipartisan Congressional Research Service (CRS) said if other countries such as Pakistan, Russia, China or US partners such as Qatar move towards greater acceptance of the Taliban, it could isolate the United States, weakening its leverage.

It could also give the Taliban greater opportunities to evade or counter the US pressure, the report on Afghanistan said.

A more punitive US approach could exacerbate the already dire humanitarian conditions in Afghanistan with uncertain implications for Taliban rule and regional dynamics.

CRS reports are prepared for lawmakers to make informed decisions on various issues of their interest. It is not considered an official view or report of the US Congress.

“Pakistan has long played an active and, by many accounts, disruptive and destabilising role in Afghan affairs, including through the provision of active and passive support to the Taliban.

“Many observers see the Taliban’s takeover (of Afghanistan) as a substantive triumph for Pakistan, bolstering its influence in Afghanistan and advancing its decades-long efforts to limit Indian influence there,” the report said.

Pakistan has been trying to convince the world to diplomatically engage with the Taliban after they seized control of Kabul on August 15. However, the international community is still sceptical about the hardline Islamists, especially on issues like terrorism emanating from the war-torn country and their promises to respect human rights.

The report stated that the acceptance of a Taliban government that acts to secure some US national security interests (such as combatting ISKP) while not governing democratically or protecting human rights could also pose a difficult, if familiar, challenge for US policymakers.

It said a US policy response that rejects and seeks to weaken the Taliban may have broad domestic support, given the history of conflict and Taliban policies that undermine US interests. It is unclear to what extent, if at all, the Taliban might change their behaviour in response to US actions, but the group appears to be prioritising internal cohesion over compromises that might appeal to foreign actors

“A less oppositional US approach towards the Taliban could allow for greater US access to, and perhaps influence over, the group and events in Afghanistan. Engagement with a Taliban government that acts in support of some US interests and against others could compel US policymakers to weigh and prioritise those interests, posing a difficult challenge,” the report said

The Taliban swept across Afghanistan in August, seizing control of all key towns and cities in the backdrop of withdrawal of the US forces that began on May 1. The militant group ousted the elected government of president Ashraf Ghani, forcing him to flee the country.

The US froze over $9 billion (£6.7 bn) of assets of the Afghan central bank after the Taliban insurgents seized power in the country.