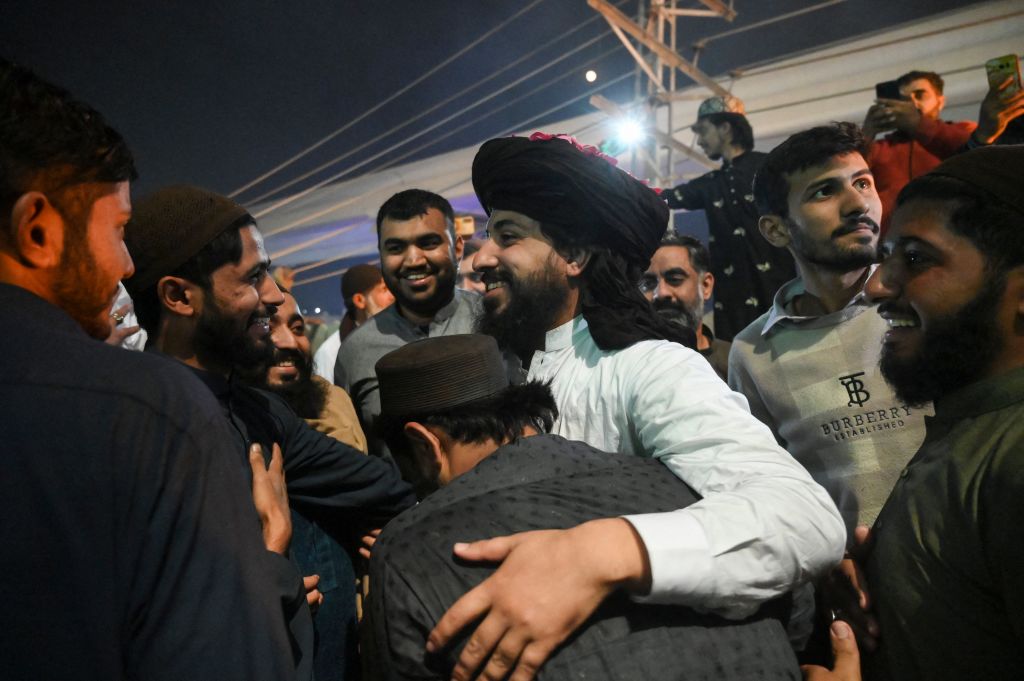 Saad Rizvi (C), head of the Islamist religious party Tehreek-e-Labbiak Pakistan, celebrates with supporters following his release from detention, in Lahore on November 18, 2021. (Photo by ARIF ALI/AFP via Getty Images)

PAKISTAN on Thursday (18) freed the leader of a radical religious party that staged massive anti-France protests, after lifting a ban on the group earlier this month to end the latest round of deadly unrest.

Hundreds of supporters could be seen cheering and throwing flower petals as Saad Rizvi, head of the Tehreek-e-Labbaik Pakistan (TLP), was taken to the party’s headquarters in Lahore.

His release was confirmed by his party’s spokesman and the Lahore police. The TLP live streamed the celebrations outside its headquarters on YouTube.

Over the past several years, the TLP has staged a series of disruptive protests, mainly linked to the flashpoint issue of blasphemy in Muslim-majority Pakistan.

Rizvi was arrested in April when the group was outlawed by authorities.

But that ban was lifted on November 7 when the government struck a deal with the party that it said was in the “national interest,” after seven police officers were killed during a rally that began last month.

It said the decision was made after assurances from the group – which has three members in parliament – that it would abide by the law.

Hundreds of detained TLP supporters were also released from detention earlier this month as part of the deal, and Rizvi – son of party founder Khadim Hussain Rizvi – had been expected to be freed this week.

The one-year anniversary of Khadim Hussain Rizvi’s death will take place on Friday (19).

Protests in April led to the French embassy issuing a warning for all its citizens to leave the country.

The latest round of protests, which drew thousands to a march that began in Lahore, resulted in several Pakistani cities facing gridlock and suspending some train services.