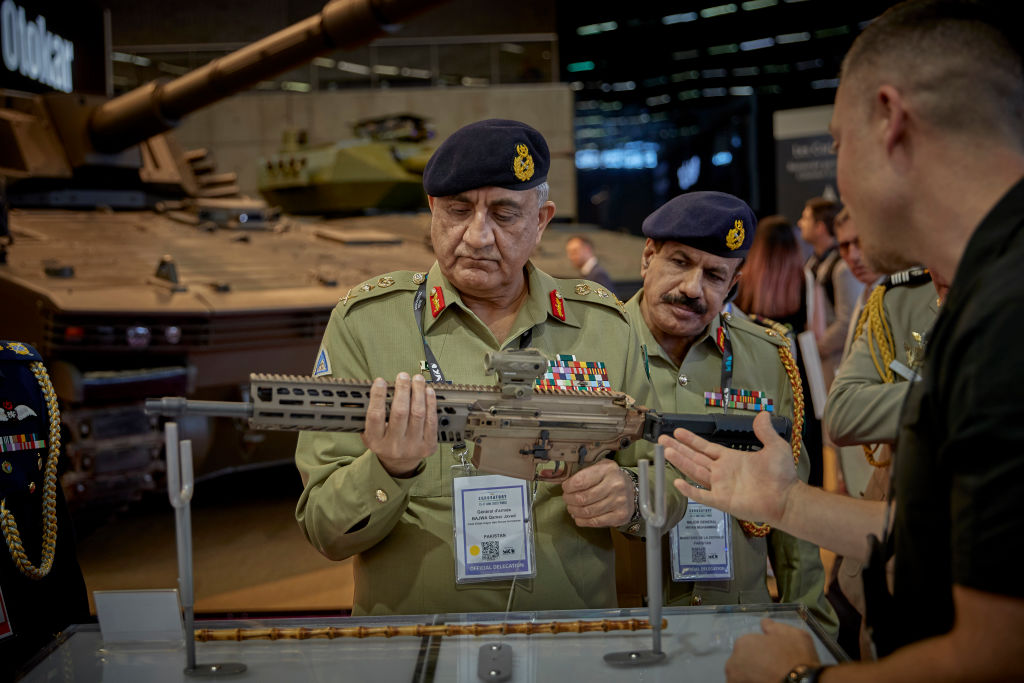 Pakistani billionaire Mohammad Zahoor, the former publisher of Kyiv Post, has reportedly helped purchase two fighter jets for Ukraine’s air force to aid Kyiv amid Russia’s war in the eastern European country. The multimillionaire has allegedly kept the donation a secret but allowed his wife, Kamaliya Zahoor, to disclose the procurement.

During a Ukrainian television talk show called, “Morning with Ukraine” on her 45th birthday on May 18, she said, “Zahoor gave me the green light to tell this. Because they [Mohammad Zahoor and other donors] hid these issues. They gave two fighter jets to Ukraine and help Ukraine, but do not disclose.”

Kamaliya (real name Natalya Shmarenkova) was born in 1977 in Zabaikallye, Chita Oblast, Soviet Union. She is a singer and a prominent TV personality. Married to Kamaliya, former Mrs World beauty pageant titleholder, Zahoor left Kyiv with the couple’s two daughters after the Russian invasion, with his wife joining a few days later. The family is currently staying in London.

Zahoor is also a major figure in the eastern European country’s media and steel industries. During the early days of Russia’s invasion of Ukraine, he called for international support for Kyiv, reported Arab News.

Born in the Pakistani megapolis of Karachi in 1955, Mohammad Zahoor was 19 when he first travelled to Ukraine, then a part of the Soviet Union, to study metallurgy on a Pakistan Steel Mills scholarship. After completing his master’s degree, he returned to Pakistan to work in the steel sector.

Zahoor studied engineering and steel-making at Donetsk, turning in a thesis on the rolling plant at the Donetsk Steel Mill in 1980. “Sixteen years later I bought that mill,” he says, with obvious — but not off-putting — satisfaction. He returned to Pakistan shortly after with a Russian wife, and worked for Pakistan Steel. “I was a safety engineer. We translated Russian safety manuals into English.”
This was the time of the Soviet invasion of Afghanistan, and Zahoor’s Russian wife prompted the suspicion of Pakistani intelligence, reported Politico.

‘Why are you getting letters from Russia at your home?’ they asked me. ‘Because my wife is Russian!’ I said!” The spooks, unimpressed, made it clear that Zahoor’s professional prospects were limited if he were to remain married to a Russian.

So he left for Moscow in 1987, to work for a Pakistani trading company, helping his employers make a fortune buying Russian steel at USD 100 a ton and selling it abroad for USD 250. “We bought 10,000 tons in all — USD 1.5 million in profit!”

Years later, as the Union of Soviet Socialist Republics fell apart and Ukraine became an independent state in 1991, Zahoor went back to participate in the country’s transition into a capitalist economy. He invested in the steel sector and established ISTIL Group, a conglomerate operating in real estate, manufacturing, and coal enrichment.

The businessman also became involved in Ukraine’s media and entertainment scene, buying the Kyiv Post, the oldest English-language newspaper in Ukraine, in 2009, which he owned for nearly a decade, and which earned him the title of “Pakistani Press Prince of Kyiv.” In 2018, he sold the paper to Syrian Adnan Kivan for USD 3.5 million.

While speaking at an interview to Arab News, the tycoon called on world powers to side with Ukraine, where the number of refugees fleeing to neighbouring countries has surged tremendously.

“This is time, actually, for us not to keep quiet, we have to take sides,” Zahoor said during the interview. “I am openly taking the side of Ukraine … this is the time actually for everyone to speak up for Ukraine, otherwise every big country is going to swallow its next-door neighbour.”

“It’s more than ten days that civilians are [being] bombarded, the nuclear plant has been targeted,” Zahoor said, referring to Ukraine’s Zaporizhzhia plant, the largest in Europe, which was seized by Russia.

“I think we are in the worst crisis in the world since the Second World War,” he added, saying a nuclear accident “in the middle of Europe” could be worse than the 1986 Chernobyl disaster, considered the worst nuclear accident in history both in terms of cost and casualties.

He lamented that European powers, as well as the United States and Britain, had not done enough to come to Ukraine’s aid, saying Ukrainian President Volodymyr Zelensky had been calling for intervention much before the Russian invasion.

“I think Europe has done much little than they should have done,” he said. “Not only EU but America and UK as well.”

Meanwhile, even as the Western bloc continues to impose sanctions on Moscow, former Pakistan Prime Minister Imran Khan has said that Pakistan’s future is tied to Russia.