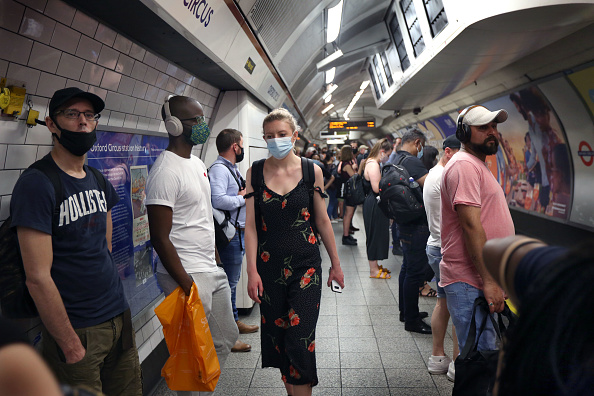 NEARLY 750,000 people in England were infected with Covid last week as per the recently released data from Office for National Statistics (ONS), which also suggests that one in 75 Britons was Covid positive last week.

In England, almost three-quarters of a million people in private households are likely to have had coronavirus in the week to 17 July, experts estimate.

Latest figures also reveal that Manchester is still the country’s Covid capital, with a 3.7 per cent positivity rate in the last week, suggesting one in 27 Mancunians were carrying the disease.

Unlike previous waves, the infection this time is now largely being driven by infections in younger age groups as the ONS report shows that secondary school-aged children and adults under 24 were 12 times more likely to have had Covid last week than over-70s, and six times more likely than over-50s.

In the North West and North East, two regions hit hardest by the Indian ‘Delta’ variant, cases fell slightly last week and in the East of England the crisis appears to have levelled off in a promising sign.

It comes after Britain’s daily infection numbers dropped yesterday for the first time in two months, with 39,906 new positive cases, a 17.8 per cent drop on the number last Thursday.

However, experts have warned the decline may just be a temporary dip ahead of a return to exponential growth, with the impact of Freedom Day not yet being felt in the data.

Meanwhile, the British Medical Association has called for “an urgent rethink” of the government’s Covid strategy, arguing that “Boris Johnson has gone too far in lifting restrictions”.

Claiming that the government’s current public infection control strategy is not working, Dr Chaand Nagpaul, the chair of the BMA council, said that the spike in infections “is a direct result of lack of effective measures by the government that is allowing the virus to let rip throughout the nation.”

“The BMA has repeatedly warned that amidst the highest levels of infections in the world, now is not the right time to abandon legal restrictions such as social distancing and mask wearing – and we are likely to see this situation continue to worsen as a result,” Dr Nagpaul said.