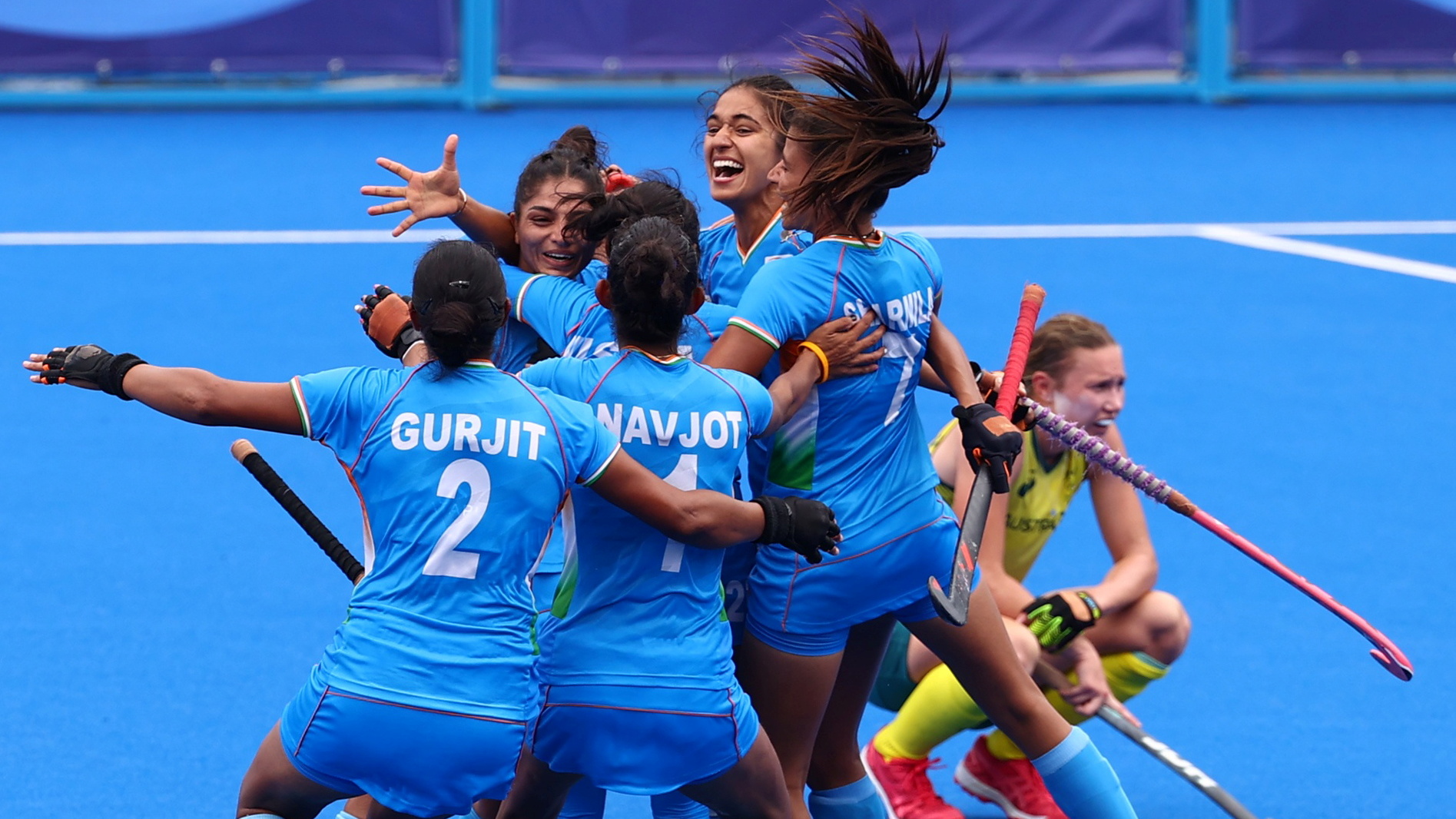 A brave and determined Indian women’s hockey team etched its name in the history books by entering the Olympic Games semifinals for the first time, stunning three-time champions and world No.2 Australia 1-0 in an intense last-eight match on Monday (2).

A day after the Indian men’s team entered the Olympic semifinals following a 49-year gap, the world No. 9 women’s side also produced a phenomenally gritty performance to make it way into the last four.

Drag-flicker Gurjit Kaur rose to the occasion when it mattered and converted India’s lone penalty corner in the 22nd minute to surprise the Australians.

Coming into the match, the odds were totally against India, taking on world No.2 Australia, a mighty opponent.

“We are so happy, it is the result of hard work that we put in for several, several days. In 1980, we qualified for the Games but this time, we made the semifinals. It is a proud moment for us,” Gurjit said after the match.

“This team is like a family, we have supported each other and found support from the country as well. We are very happy,” she added.

But the Indians, determined to prove a point, produced a strong and brave performance to eke out the narrow win over the Hockeyroos.

How much it meant for the team and Indian hockey in general could be gauged from the emotions that were on display after the final hooter went off.

The players screamed, hugged each other, and got into a huddle with their Dutch coach Sjoerd Marijne with tears of joy rolling down their faces.

India’s best performance in the Olympics came way back in the 1980 Moscow Games where they finished fourth out of six teams.

In that edition of the Games, women’s hockey made its debut in the Olympics and the sport was played in a round-robin format with top two teams qualifying for the final.

The Rani Rampal-led side will play Argentina in the semifinal on Wednesday (4).

The Indians started slow off the blocks but grew in confidence as the match progressed.

Australia had the first shot at the goal but India goalkeeper Savita did just enough to deny Amrosia Malone, whose slap shot from inside the circle hit the post.

The Indians thereafter adopted an aggressive approach and caught the Australian defence off guard quite a few times.

India’s pace and determination seemed to have surprised the Australians as they panicked while defending and were lucky not to have conceded a goal in the first quarter.

In the ninth minute, skipper Rani Rampal’s deflection from a Vandana Katariya shot hit the back post as Australia survived.

A minute later, Broke Peris’ shot from top of the circle just went wide past a fully stretched Savita.

The Indians created another chance in the first quarter but an alert Australian goalkeeper Rachael Lynch came out of her line to deny Sharmila Devi from a one-on-one situation.

The Australians pressed hard in the second quarter and secured their first penalty corner in the 20th minute which was defended brilliantly by India.

Minutes later, India secured their first penalty corner and Gurjit, who had a disappointing outing so far in the tournament, rose to the occasion and converted the chance with a low flick to stun the Australians.

The Indians were bold and courageous while defending as minutes later, Deep Grace Ekka got a vital stick to keep out Emily Chalker’s strong hit from close range.

Down by a goal, the Australians attacked with numbers after the change of ends and Mariah Williams came close to restoring parity but Savita came in between.

Australia secured three back-back-to-back penalty corners soon but the Indian defence, led by Savita and Deep Grace Ekka, stood like a rock in front of the goal.

Thereafter, the play was mostly inside the Indian circle as Australia pressed hard but the Indians managed to soak up the pressure with some brave defending, not afraid to put their bodies on line.

In the final eight minutes of the game, the pressure was relentless on the Indians as Australia secured four more penalty corners but failed to breach the Indian defence.