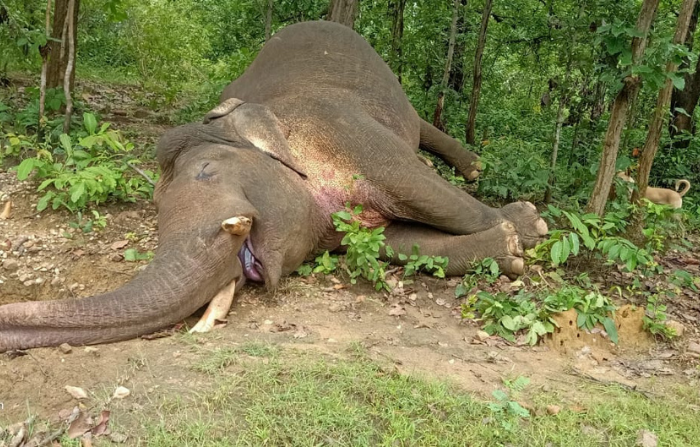 The carcass of an elephant in the Badabahal Range area of the eastern Indian state of Odisha. (Picture Credit: Dr Biswajit Mohanty)

ELEPHANTS are dying or being killed in the eastern Indian state of Odisha at an alarming rate in recent years, prompting conservationists and environmentalists to call for urgent action to avert an ecological disaster.

Odisha, which has the fifth-largest elephant population in India, has witnessed 50 deaths in the first eight months of 2021 alone (160 in the past two years) owing to multiple factors.

One of the major threats the gentle giants have faced in Odisha’s forests is poaching, particularly during the Covid-19 pandemic. Poachers hunting for ivory have become “emboldened” because there is not enough forest patrolling due to the restrictions of the pandemic, according to Sangita Iyer, founding executive director of Voice for Asian Elephants Society (VfAES) and a National Geographic Explorer and biologist.

The award-winning nature and wildlife filmmaker told Eastern Eye, “There are not many forest officers and whatever numbers there are, how many are doing their job properly?”

“Elephants are such important animals for the environment. They help in afforestation by means of seeds (dropped through their dung) spread in the forest areas as they walk long distances in a day, help in mitigating the climate and create ways for other animals to move around and reach water sources. It is our compulsion to save these animals in order to protect the environment,” Iyer said.

She added there were multiple challenges to the animals. According to non-profit TRAFFIC, which monitors wildlife trade, poaching cases have gone up by 44 per cent in case of large mammals and 25 per cent for smaller ones during the pandemic.

Iyer claimed the relevant authorities were using the pandemic as a reason to justify the lack of action to protect elephants. She wondered how the pandemic could be a challenge when it comes to patrolling forest areas where there are anyway few people living there. The elephants have also been hit by heavy mining activities and development work on forest land, which is their core habitat.

“Forty per cent of India’s iron ore comes from Odisha and while it is claimed that the area in question is only one per cent of the forest, that one per cent is the elephant’s core area,” Iyer said.

In addition, the elephants have been threatened by disease, sagging powerlines that electrocute them, and they are also hit by trains passing through their habitat. Iyer said corruption was a major reason why the authorities are failing to protect the giants.

She added that offenders are also not being held accountable and alleged that officers are colluding with poachers.

Urging the state’s political leaders to act, she said, “The Odisha chief minister has to take a strong stand. He has issued stringent orders, but nothing has changed so far.”

The Hindustan Times reported in December 2020 that at least 82 forest officials in Odisha have been accused of corruption in the recent years. Environmentalists alleged the department has become such a “hub of corruption” that officials are not afraid of embezzling money from various state forest-related schemes and coveted postings in mining.

Iyer said she sent several petitions to top state bureaucrats about the threats to the elephants and while she has received multiple assurances that something is being done, she hasn’t seen any result yet. Instead, she said, the elephant deaths have only gone up this year.

In 2011, the government of Odisha announced that every case of an “unnatural” elephant death had to be investigated.

Biswajit Mohanty, secretary of Wildlife Society of Odisha, said in 2018 despite the deaths of elephants, not much action has been seen, apart from the suspension of low-ranking forest guards.

Development projects have also had an impact on the elephants. “What we see happening today is reckless grabbing of land and not sustainable development.

Why is the land not being restored after mining? It is not the tribals, but the infrastructure authorities who are causing the problems.

“The elephants do not have food inside the forest and they get killed when they come out. Where will they go?” Iyer said.

But is there a strong animal rights movement to take on the serious issue?

“That is the problem,” Iyer said. According to her, while there are bodies like the Wildlife Protection Society of India and people like Mohanty who have taken an interest in this, there is a lack of an “overall activism” to bring enough focus on the issue.

She added there is absence of a culture of animal conservation in India.

“Activism on social media has to be genuine and not to boost one self,” she said.

Elephants are “widely exploited in several Indian temples in the name of religion”, Iyer claimed. The Hindu religion talks about ahimsa (non violence) but when we see how the elephants get treated at temples, like their captivity, it is nothing other than himsa (violence).

Iyer said the Wildlife Protection Act of 1972 was amazing, but said apart from corruption, intimidation is another factor that prevents strong implementation of the laws. While laws say killing of wildlife is punishable with seven years of punishment, nothing happens in reality, she claimed.

According to Iyer, the media has not taken up the matter and that has been a major challenge. She and others like her have taken up the responsibility to meet media outlets across the world and spread awareness about the protection of Asian elephants, which number 40,000 in the world and of which 60 per cent are in India.

Efforts are also on to put up traffic billboards to educate vehicle drivers about elephant crossings, build barriers across wells in villages in forests so that the animals do not fall in them (she said the government of Odisha has done a decent job on that), strongly addressing the issues of poaching and electrocution and building a collaboration between government and non-governmental organisations.

“There has to be an open and honest agreement on the problem first. If we don’t acknowledge that there is a problem in the very first place, we can never find a solution,” Iyer said.

Eastern Eye tried to reach the Odisha forest department for comment at the time of publication of this story but did not get any response.