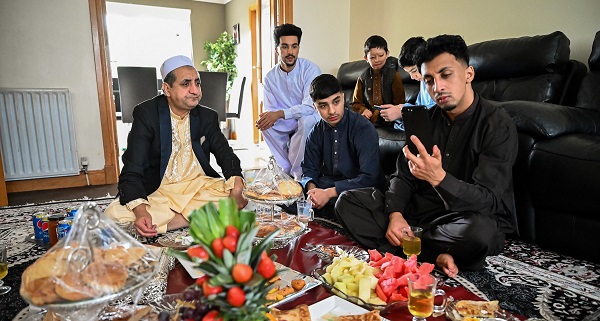 BREAKING the fast during Ramadan has become a spicier occasion for some due to the popularity of naga wings, accord­ing to food experts.

The wings are covered in a paste made with Dorset Naga chillies, which have the reputation of being the hottest in the world. Naga chillies are native to the Sylhet region of Bangladesh.

More fried chicken shops in London, Luton and Manchester have been selling the fiery starter in recent months. In some parts, it has replaced peri peri as the most popular sauce.

In the bustling Whitechapel area of East London, at least five takeaways had naga-inspired options.

According to locals in the nearby Step­ney Green area, half of the takeaways now have food sprinkled with so-called ghost chilli on the menu.

It has led to some Muslims who are observing the month of fasting to order naga wings for their evening iftar meal, or make their own at home using recipes posted on social media apps including Instagram and TikTok.

“Customers don’t usually require ex­tra hot sauce for this one.

“We also have a naga version of doner meat on the menu which is popular.

“Customers like to have new varieties of favourites they are familiar with and the red-hot naga wings is proving to be a success for us.”

The wings are known for their zingy after taste and it is advisable to drink water or cold milk afterwards, according to nutritionists.

Among the fans of the spicy snack is food author Dina Begum, who posted a picture on Twitter of her meal of naga hot wings, fries and a mango last week.

He said: “I added lemon juice too [be­cause] I’m weak and needed to tone it down a bit. Five teaspoons of it, but, my god, it banged.”

Meanwhile, the recipe account Ayesha’s Kitchen has posted YouTube videos on how to make naga wings at home in the buildup to Ramadan, which ends in the middle of May.

“Now they are everywhere. It’s a nice and spicy twist on the traditional spicy chicken wings.

“I like these wings because they use the Mr Naga paste which is popu­lar among Bangladeshi households for its fiery flavour.

“We add it in curries for an extra kick. I’m surprised this wasn’t thought of be­fore, because it’s a great combination.”

He added: “I wouldn’t personally be having these during iftar meals though, but I know many families will probably indulge themselves now and then re­gardless because it’s a tasty treat.”

Bahee Van de Bor, a paediatric dieti­tian, told Eastern Eye: “During Ramadan when you break your fast, the focus should be around nourishing your body with balanced meals and snacks.

“Ideally, choose nutritious foods like fruit and nuts to break the fast.

“You can enjoy treats that are high in fat and sugar. However, keep the portion sizes small and consider restricting this to one or two days of the week.

“Continue to serve meals that are bal­anced with carbohydrates, protein and healthy fats to prepare the meal.”

Samina Choudhury, 30, who last week tried the wings for the first time, said: “Naga-flavoured food items seem to be very popular in Whitechapel.

“Wings are the most popular item be­ing sold in almost all takeaway chicken shops. When I bought a portion of wings, I was hit with the smell of strong chilli.

“The wings were coated with a thick layer of naga sauce, and sprinkled with some coriander.

“You have to love spice to order this. It’s not everyone’s cup of tea.”

He added: “I ended up dipping Wot­sits into it.”