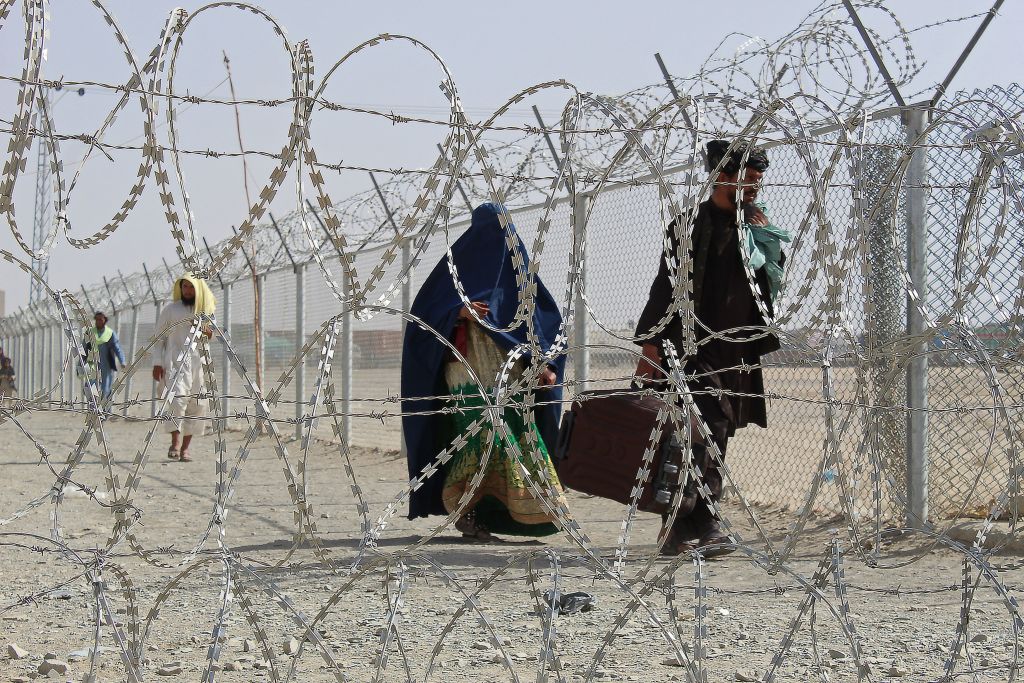 Afghan nationals walk along a fenced corridor after crossing into Pakistan through the Pakistan-Afghanistan border crossing point in Chaman on August 28, 2021 following the Taliban’s military takeover of Afghanistan. (Photo by AFP via Getty Images)

THE number of Afghans crossing over to Pakistan has soared since the twin suicide bombings in Kabul on Thursday (26), despite Islamabad’s position that it won’t accept any refugees from its western neighbour.

Some 6,000 Afghans would normally move across the Spin Boldak-Chaman border crossing and the number went up three-fold after the deadly terror attacks in Kabul, a media report said.

“There has been an unprecedented rise in the numbers of Afghan people and refugees entering into Pakistan from various provinces of Afghanistan in the last two days”, a health official told The Guardian.

While those who are travelling to Pakistan for medical treatment or have proof of residence in the country are allowed to cross, people smugglers have been reportedly assisting families to get over the border.

Spin Boldak-Chaman is a major border crossing that provides Afghans access to Pakistan’s seaport of Karachi and it has been a major trade route between the two countries.

Pakistan closed the border recently after the Taliban took over Spin- Boldak but subsequently eased the blockage.

Pakistan, which is already hosting millions of Afghan refugees displaced by decades of strife, has expressed its unwillingness to welcome any more.

“We are not allowing Afghan refugees to enter and cross our border. There might have been a few individual cases but there is no influx,” Balochistan state government spokesman Liaquat Shahwani told The Guardian.

The reports of people fleeing Afghanistan come in the face of the United Nations’ prediction of “a possible exodus of up to half a million more refugees” by the end of 2021.

The UN, however, said there currently was not a “flood of people fleeing across Afghanistan’s borders”, something echoed by the Pakistan government. But the global organisation said it was laying contingency plans as the crisis deepens in Afghanistan.

“The humanitarian emergency currently is inside Afghanistan,” Kelly Clements, the deputy high commissioner of the UNHCR, told reporters on Friday (27).

But “this is obviously a really dynamic situation,” she said, explaining that the UNHCR was planning for a variety of different scenarios, including a mass exodus.

“We are preparing for around 500,000 new refugees in the region. This is a worst-case scenario,” she said.

She stressed the need to boost support for neighbouring countries that already host more than 2.2 million Afghan refugees, and which could soon see a fresh influx.

Iran and Pakistan, which together host 90 per cent of the Afghan refugees in the region, along with some three million other Afghans without refugee status, “will need a lot of support”, she said.