Kohli, a BSc Management student, started working towards improving gender equality in India when she was just 14. 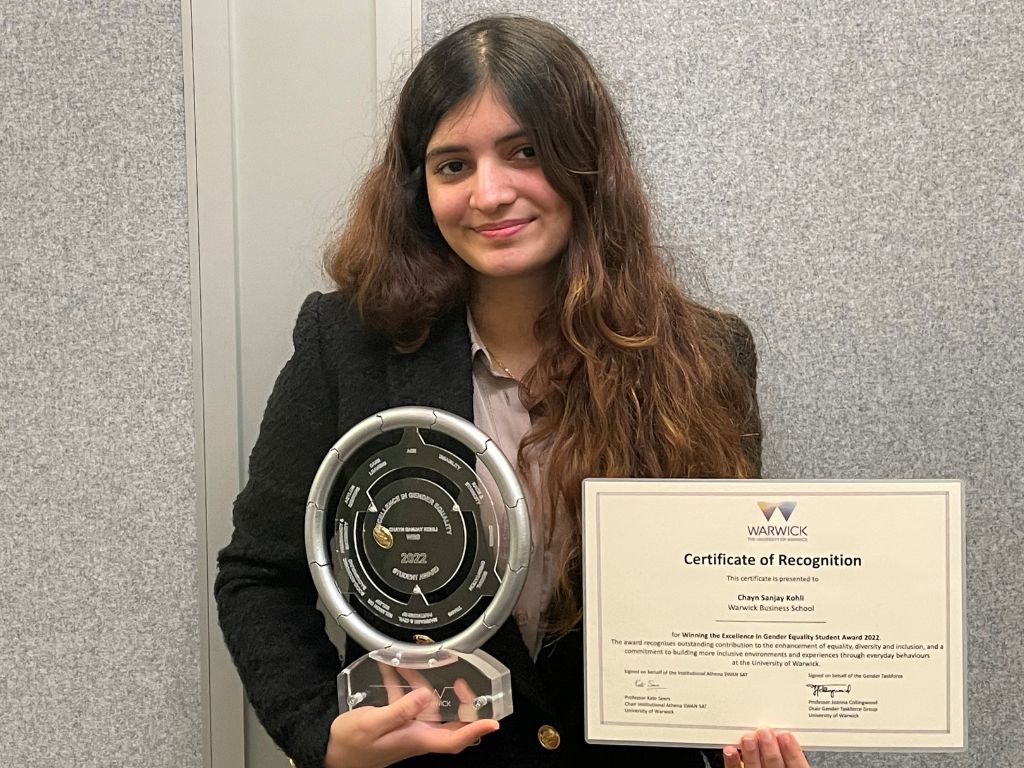 She started working towards improving gender equality in India at the age of 14 and last year, the efforts culminated in Chayn Sanjay Kohli receiving the Student Award for Excellence in Gender Equality in 2022.

A second-year student of BSc in Management, Kohli has worked on the issue of gender equality both in Warwick and India, where she is based, and her efforts have been recognised by the University of Warwick, where she studies, and India.

As a teenager, Kohli started working with underprivileged families in India to educate women and girls in subjects such as mathematics and English as well as spreading awareness among them on health issues that are considered taboo, including menstruation and hygiene.

After arriving in Warwick in 2021, Kohli continued with her gender-based work by launching and managing a number of projects to improve gender equality and representation.

She manages the blog and website for Warwick Women’s Career Society, provides educational opportunities for women on stigmatised topics, and runs CV clinics at the university to support women in industries that are dominated by men.

Kohli is the vice president of the Indian National Student Association and in that capacity, she works on creating opportunities that are typically less accessible to women, including networking opportunities.

In 2019, following the deadly terror attack in Pulwama in Kashmir in which 40 members of the Indian paramilitary troops were killed, Kohli raised funds to sponsor the education of the daughters of two families that were affected by the incident and worked to secure employment opportunities for them.

This is not the first time that Kohli has been recognised for her efforts toward improving gender equality.

Before receiving the University of Warwick student award, Kohli has been conferred an award for women’s empowerment in India, as well as an International Icon award.

“The biggest challenge in India and Warwick remains common: awareness. Women are unaware of the opportunities they can monetize and do not understand the scale of their dreams. While in Warwick, awareness relates to understanding external opportunities related to finding jobs and building inclusivity in male-dominated sectors,” Kohli said.

“The biggest challenge in India remains internal awareness, as most women are not even allowed to dream. Parents earning low incomes would rather educate their sons than their daughters, and thus, women from such communities have less access to opportunities and need to convince not only employers but their families of their capabilities to achieve their dreams,” she added.

She also said that during her growing years, her grandmother had told her that a dream is the most valuable gift one could give himself/herself as it added purpose and meaning to life. She has been following that till today.

“When I work with different women, I make them aware that they are allowed to dream, show them a path to their dream and encourage them; the smile I see on their face and the fire I see in their soul is the most rewarding part of my work. A single dream can change your life – giving you the grit to fight and giving your life the meaning, you always searched for,” she said.