Man with ‘Monkeypox symptoms’ photographed on packed train in Spain

The NHS website informed that monkeypox can be passed on from person to person through any close physical contact with blisters or scabs. 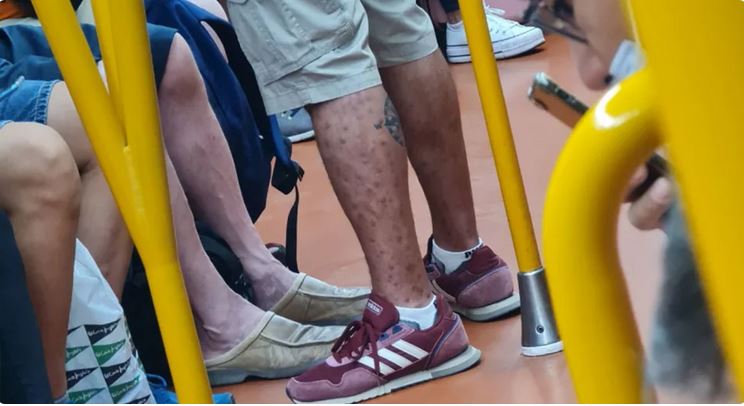 A man with monkeypox photographed on a packed train in Madrid, Spain, has caused concern and calls for people to take the disease seriously, media reports said.

Dr Arturo Henriques, 32, photographed the man and shared it on social media. But, later the man told local media that he ‘doesn’t actually have the virus’.

“The gentleman gets on the train at Legazpi station. Completely full of wounds from head to toe, including his hands. I see the situation and I also see people around him as if nothing will happen to them,” Dr Henriques claimed in a series of tweets.

“I went up to the gentleman prudently and asked him what he was doing on the metro if he has monkeypox. His response: yes, I have it, but my doctor did not tell me I had to stay home. He only told me to use a mask. I tell him the wounds he has all over his body are what are most infectious.”

The doctor also revealed that a lady who was close to the man said that she wasn’t concerned because she was not gay. According to her, straight people did not have to be concerned.

Interestingly, Dr Henriques deleted the tweets later and his account was made private.

The ‘accused’ patient told reporters that he hadn’t spoken to Dr Henriques at any time. Reports revealed that the man has neurofibromatosis and his legs are covered in a rash, which looks similar to monkeypox rash.

Health experts said that anyone can get monkeypox, so long as they have close physical contact with an infectious person. It is a misconception that monkeypox only spreads among men who have sex with other men, they warn.

The monkeypox rash comes a few days after a person feels unwell with symptoms such as a fever, headache, muscle aches, back ache, chills or exhaustion. The rash tends to start on the face and hands before spreading to the limbs.

The NHS website informed that monkeypox can be passed on from person to person through any close physical contact with blisters or scabs. It can spread up until the rash has completely healed – when all scabs have fallen off and a new layer of skin has formed.

Monkeypox can also be transmitted through touching clothing, bedding or towels used by someone with the virus, and even the coughs or sneezes of a person with the virus can be infectious.

Spain is one of the world’s worst-hit countries. On Saturday (30), the country reported its second monkeypox-related death, bringing to three the number of fatalities linked to the current outbreak outside of Africa.

The country’s health ministry’s emergency and alert coordination centre put the number of infected people at 4,298.

More than 75 countries where monkeypox is not endemic have reported outbreaks of the viral disease, which the WHO has declared a global health emergency, as confirmed cases crossed 25,000 and non-endemic countries reported first deaths.

The latest figures show that there have been 2,436 confirmed monkeypox cases in UK, with 1,778 of those in London.