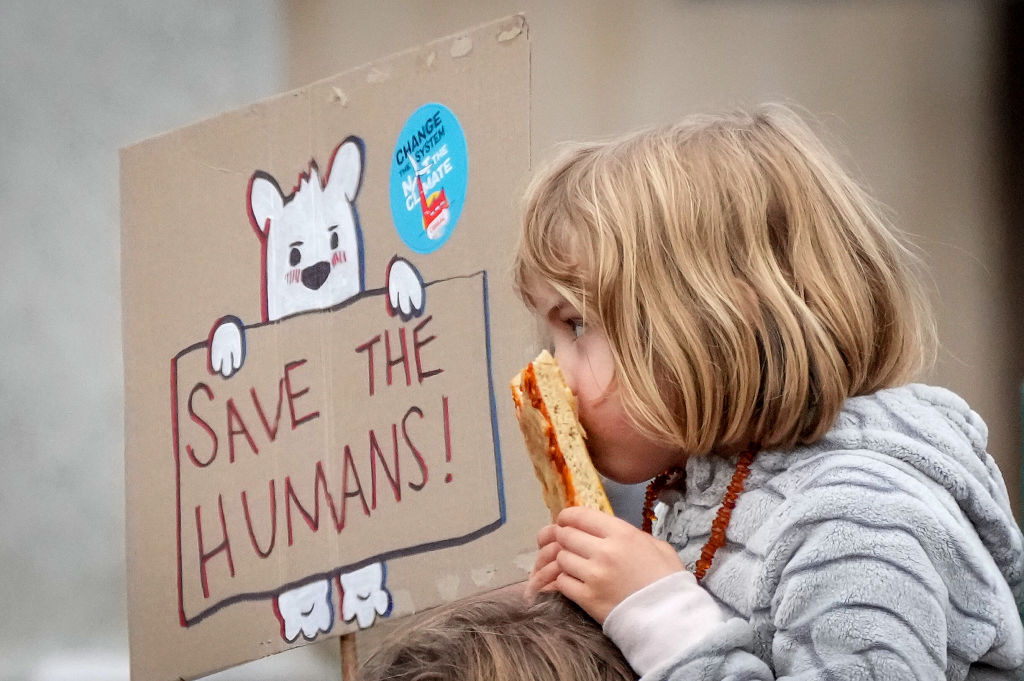 Children listen to speakers as they attend the Fridays For Future march on November 5, 2021 in Glasgow, Scotland. (Photo by Christopher Furlong/Getty Images)

COMPANIES like Amazon and Apple as well as Mahindra Group and Dalmia Cement (Bharat) from India have joined as founding members of the ‘first movers coalition’ to work towards driving demand for zero-carbon technologies, the World Economic Forum (WEF) has said.

The Coalition has been launched at the COP26 Summit being held in Glasgow.

Roughly half of the emission reductions needed to reach the 2050 climate goals rely on technologies in early development, demonstration or prototype phases, while accelerating innovation in this decade is critical to bring these technologies to market and make them cost-competitive.

The WEF, in partnership with US special presidential envoy for climate John Kerry, has announced the first movers coalition, a new platform for companies to make purchasing commitments that create new market demand for low-carbon technologies.

The commitments aim to be collectively significant enough to commercialise decarbonisation technologies. The Coalition will create a long-term impact by driving milestones this decade through investment into these technological solutions.

It will work across eight key sectors, seven of which — steel, cement, aluminium, chemicals, shipping, aviation, and trucking — account for more than a third of global carbon emissions but do not have cost-competitive clean energy alternatives to fossil fuels.

WEF President Borge Brende said, “Technology has given us the tools to reduce our emissions and build a stronger and more inclusive economy of the future. For innovators and investors to play their part in tackling the climate crisis, they need clear market demand.

“The first movers coalition will leverage the collective purchasing power of leading companies and drive the need for these technologies. I call on business leaders to work with us and be the role models keeping our climate goals alive.”

Kerry said the First Movers Coalition is a platform for the world’s leading global companies to make purchasing commitments to create early markets for critical technologies needed to achieve net-zero by 2050.

Members of the coalition have committed to using emerging technologies including sustainable aviation fuels (SAF) with significant emissions reductions, electric, and hydrogen propulsion for air travel by 2030.

Airlines and air transport companies have set a target of replacing at least five per cent of conventional jet fuel demand with SAF, which reduces the life-cycle of GHG emissions by 85 per cent or more when compared with conventional jet fuel, and/or using zero-carbon emitting propulsion technologies by 2030. Similar targets have been set for airfare and air freight purchasers.

For the steel sector, members have committed to purchasing volumes of near-zero-emissions steel by 2030.

These technologies include hydrogen direct reduction, carbon capture use and storage, and electrolysis-based production processes. Steel purchasers set a target that at least 10 per cent of their annual steel procurement volumes by 2030 meet or exceed the first movers coalition definition for near-zero emissions steel.