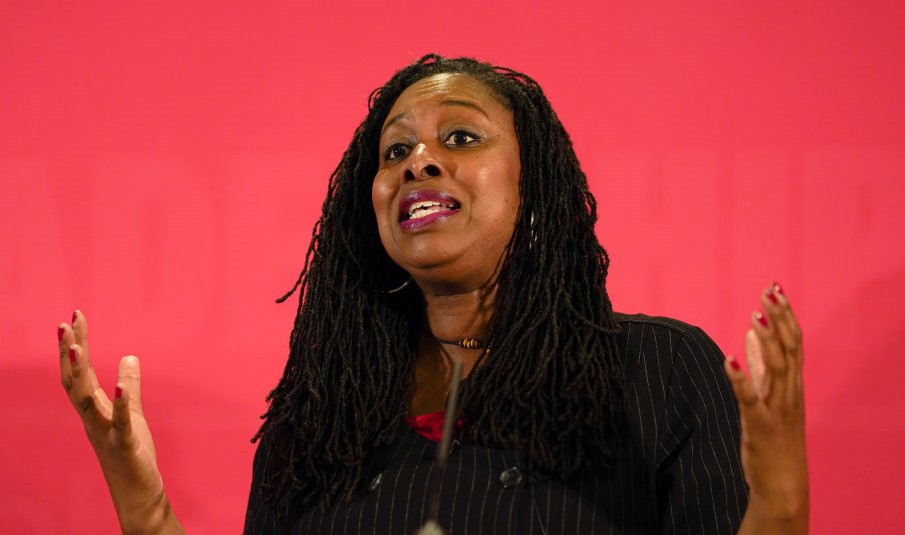 DURHAM, ENGLAND - FEBRUARY 23: Dawn Butler, Shadow Secretary of State for Women and Equalities speaks to the audience as she answers questions during the Labour Party Deputy Leadership hustings at the Radisson Blu Hotel on February 23, 2020 in Durham, England. Ian Murray, Angela Rayner, Richard Burgon, Dr Rosena Allin-Khan and Dawn Butler are vying to become Labour's deputy leader following the departure of Tom Watson, who stood down in November last year. The ballot will open to party members and registered and affiliated supporters on February 24. (Photo by Ian Forsyth/Getty Images)

LABOUR MP Dawn Butler has accused the Met Police of racial profiling, after she and a male friend were pulled over while driving through Hackney in a “nice car” on Sunday (9).

The former shadow equalities minister said there was “institutional racism in the police”, adding that it was “about time we changed the system so it works for everyone and it’s effective”.

A Met statement said the BMW was pulled over because an officer had “incorrectly” entered its registration number into the police computer, and it was traced to an address in northern England.

“Once the mistake was realised, the officer sought to explain this to the occupants; they were then allowed on their way,” it added.

Butler, however, said such incidents were “just tiring, exhausting and mentally draining”.

“It’s obviously racial profiling,” the Brent Central MP, who was recently named among the 25 most influential women of 2020 by the Vogue.

A video recorded by Butler shows an officer saying the police were carrying out searches linked to “gang and knife crime”.

“It is really quite irritating,” she tells the officers. “It’s like you cannot drive around and enjoy a Sunday afternoon whilst black, because you’re going to be stopped by police.

“I think that’s a ridiculous reason to stop.

Labour MP Dawn Butler has told Sky News she believes she was the victim of racial profiling after the car she was in was stopped by police in the London borough of Hackney.

Sky News has contacted the Metropolitan Police for comment.

An officer can be heard responding: “I appreciate everything you say, and I do apologise for wasting your time.”

Butler later told BBC that there was a problem “if you see black people in a car and you assume that they are criminals”.

“That’s why you have to address the system that is currently biased against black people,” she added.

Speaking to Press Association on the incident, she said it was “exhausting doing things whilst black”.

“Because you’re just doing every day things and you have to explain yourself away or justify the reason why you’re driving through Hackney,” she added.

“It’s exhausting and I’m tired of it.”

Butler said police forces must “be honest about the institutional racism that exists”, and officers should undergo “intense training” on racial bias.

Good morning twitter I see the racist trolls are going crazy with conspiracy theories. Someone who claims to be an ex police officer is challenging me to a debate. No need waste my time as I’m speaking to current police officers. Working together to make the system better.

“When will the Metropolitan Police give up on racial profiling?” the former shadow home secretary asked.

Conservative London mayor candidate Shaun Bailey, however, tried to downplay the incident in a tweet: “I’ve been stopped and searched, Dawn.

“Instead of political attacks, let’s improve relations between police and the communities they serve.”

Twitter I’m tired and need to get some sleep. Can someone please explain institutional racism to Shaun. I think it’s important he understands what it is.

Following the incident, the Independent Office for Police Conduct had launched a probe into whether police forces in England and Wales were racially biased, and identify “systemic issues which should be addressed”.

“Evidence of disproportionality in the use of police powers has long been a concern which impacts on confidence in policing, particularly in the BAME communities,” IOPC director general Michael Lockwood had said at that time.

Latest stop and search stats showed a disparity rate of 4.3 for all black, Asian and minority ethnic people, and 9.7 for black people, noted reports.