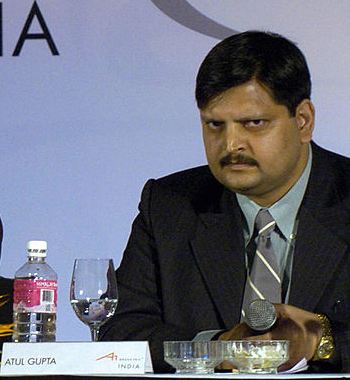 FILE PHOTO: Atul Gupta listen to questions from the media at the launch of the A1 Grand Prix India in New Delhi, 30 July 2005. (MANAN VATSYAYANA/AFP via Getty Images)

SOUTH AFRICAN prosecutors on Monday (5) announced that Interpol issued a “red notice” against the Indian-born Gupta brothers, who were allegedly a part of massive corruption racket in the country.

The announcement is seen as a key step towards extraditing them.

The three Gupta brothers — Ajay, Atul and Rajesh — are at the centre of a long-running investigation into the plunder of state assets during the tenure of former president Jacob Zuma from 2009 to 2018.

The Zondo Commission is examining the allegations along with the Zuma’s role in allowing the Gupta brothers to influence policy and misuse state resources.

In a statement, the prosecution authority’s chief investigator, Hermione Cronje, said Interpol had issued a “red notice” against two of the brothers, Atul and Rajesh.

Red notices are a global alert enabling law enforcers to arrest a person sought for prosecution or serving a sentence and detain them pending extradition.

They fled South Africa shortly after the judicial commission started investigation in 2018, and are suspected to be in the United Arab Emirates (UAE).

Atul and Rajesh Gupta are wanted in connection with a 25-million-rand (£1.3m) contract paid to a Gupta-linked company, Nulane Investments, to conduct an agricultural feasibility study, Cronje’s office said.

The third brother, Ajay, who is not named in the red notice, is part of a separate case, it said.

Last month South Africa said it was close to finalising an extradition treaty with the UAE.

The prosecution authority became alert as Zuma sought to avoid jail after being sentenced to 15-month imprisonment by a constitutional court.

He was sentenced for failing to appear at the corruption inquiry led by deputy chief justice Raymond Zondo in February.