India’s Covid crisis: what is to blame? 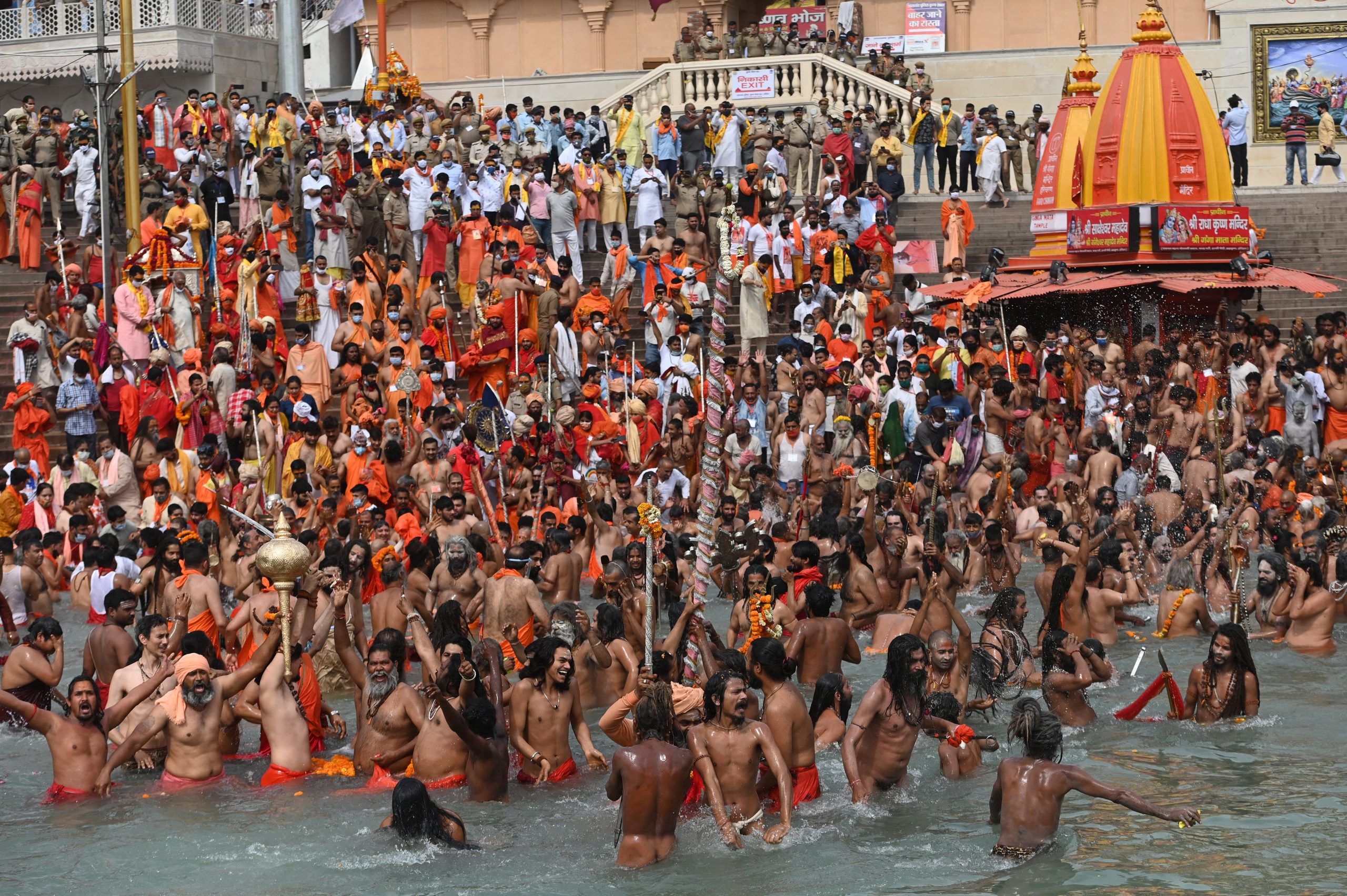 Naga Sadhus (Hindu holy men) take a holy dip in the waters of the Ganges River on the day of Shahi Snan (royal bath) during the ongoing religious Kumbh Mela festival, in Haridwar on April 12, 2021. (Photo by Money SHARMA / AFP)

India is reeling from a new coronavirus surge, stretching hospitals to the limit with dire shortages of beds, oxygen and drugs.

With more than 2,000 people dying daily, we look at the reasons for the vicious new wave and why the health care system is overwhelmed.

While the pandemic raged elsewhere at the start of 2021, in India daily infections slid to under 9,000 with fewer than 80 deaths.

This raised hopes that India, despite having some of the planet’s most densely populated cities, had somehow escaped the worst.

Blood surveys suggested that a hefty proportion of the population might have antibodies and that India might have achieved “herd immunity”.

Other possible factors cited were India’s young population and that greater exposure to other pathogens increased resistance to the virus.

But possibly because of a new variant, cases took off again in March. This month alone India has recorded more than four million new infections.

As cases started falling in October and November, the Hindu nationalist central government and state authorities allowed most activity to return to near normal levels.

Tens of thousands of farmers took part in demonstrations against new agriculture laws and people thronged religious festivals such as Durga Puja and Dussehra.

The biggest was the Kumbh Mela in Haridwar, which between January and this week was attended by upwards of 25 million Hindu pilgrims.

Masks and social distancing were largely forgotten, as they were at election rallies in several states. One in Kolkata saw prime minister Narendra Modi address an estimated 800,000 people.

But authorities also failed to use the time to beef up India’s chronically underfunded health care system and hospitals’ stocks of medicines and oxygen facilities.

In early 2021 production of remdesivir was “negligible or nil” after firms were left with unwanted stockpiles, some of which expired and were destroyed, the Indian Express daily reported.

“Government had asked us to reduce manufacturing because Covid-19 cases were reducing and there was no demand,” DJ Zawar, managing director of Kamla Life Science, told the paper.

“One solution to this crisis was to create a stockpile of antiviral drugs when cases were low, but that did not happen,” said Raman Gaikwad, an infectious diseases specialist at Sahyadri Hospital in Pune.

Experts have long warned that India, in common with other poor countries, has a severe lack of medical oxygen, which is vital for treating serious Covid cases.

According to news website Scroll, it took until October for the government to float tenders to build oxygen units on site at 150 district hospitals. Most still aren’t up and running.

In Punjab, 290 new ventilators are lying in a warehouse, the Tribune daily reported. Hospitals have not ordered them, in part because staff weren’t trained to operate them.

At the same time in a show of generosity and “vaccine diplomacy”, India was exporting tens of millions of AstraZeneca shots made domestically by the Serum Institute.

But once cases started surging, New Delhi froze exports — including to the Covax inoculation initiative for poorer countries — to prioritise India.

So far India has administered some 130 million shots and from May 1 all adults will be eligible even though stocks have been running low in some areas.

Serum, meanwhile, is warning that production will be badly affected unless the United States lifts export controls on raw materials needed to make the vaccines.

“I think a premature declaration of victory lulled the population into a false sense of complacency,” Ramanan Laxminarayan from the Center for Disease Dynamics, Economic and Policy told AFP.