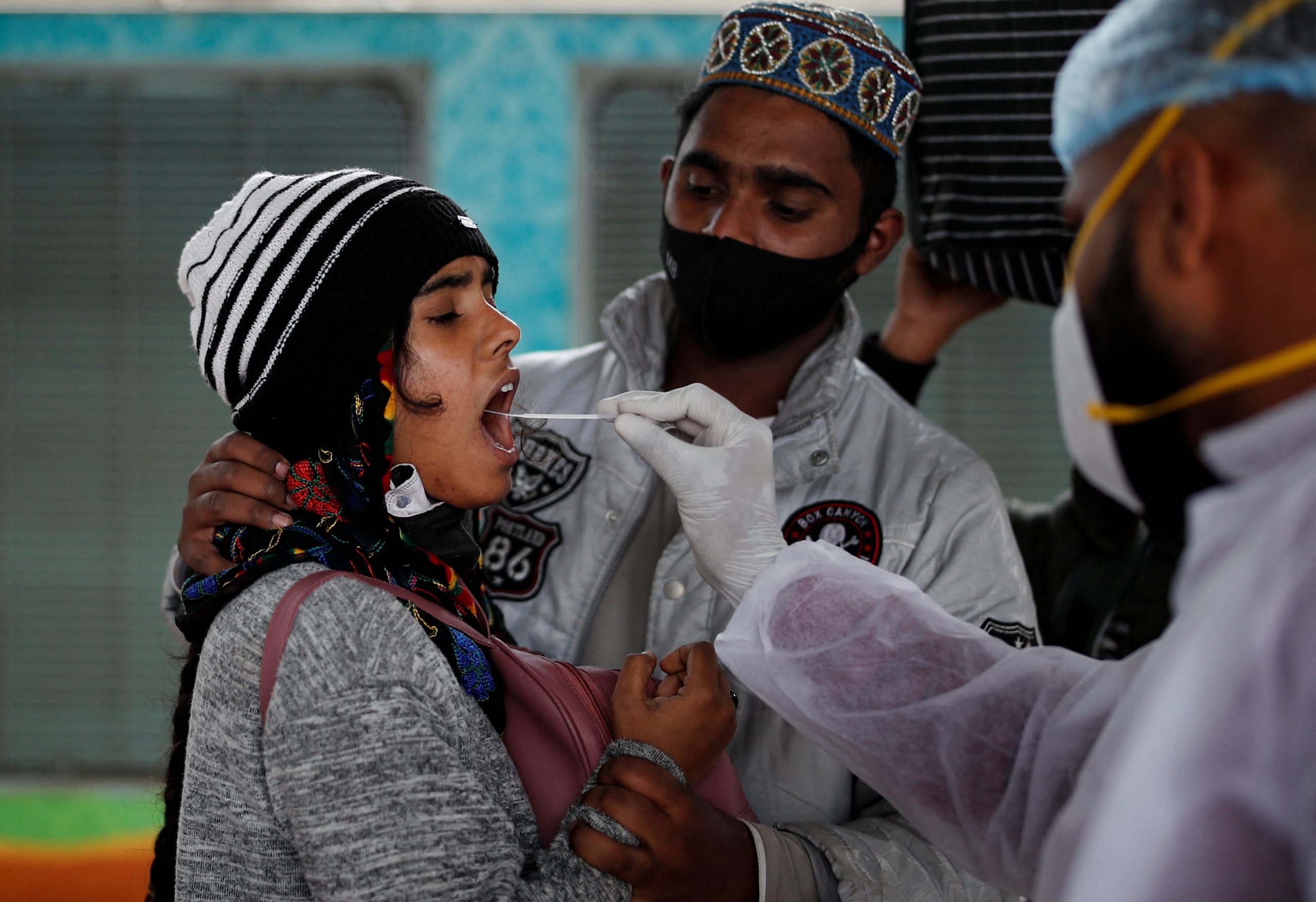 A health worker collects swab sample during a rapid antigen testing campaign at a railway station in Mumbai. (REUTERS/Francis Mascarenha)

NEW Covid-19 infections in Indian cities such as capital New Delhi and Mumbai could peak next week after rising rapidly, experts said on Thursday (13), as the country reported the highest number of daily cases since late May.

The 247,417 new infections were more than 30 times higher daily cases from a month ago, rising as the more transmissible Omicron variant replaced Delta across the country. Total infections reached 36.32 million, behind only the United States.

“Our modelling, and those of others, suggests that the big Indian cities should see their peaks in cases close to Jan. 20, while the overall peak in India may be shifted a bit later, to early February,” said Gautam Menon, professor of physics and biology at Ashoka University near the capital.

Mumbai recorded a high of 20,971 infections last Friday but cases have been coming down since. City officials said the rate of infection was also coming down, with nearly 80 per cent of Covid-19 hospital beds vacant.

Delhi reported more than 27,500 infections on Wednesday (12), close to its all-time high, and its health minister told local media this week infections could start coming down in a few days.

Federal and state health officials say a majority of the infections in the ongoing third wave have been mild, with fewer hospitalisations and deaths than the previous surge in April and May that killed hundreds of thousands of people.

The health ministry has said common pain relievers like paracetamol should be enough for people with mild fever due to Covid-19. It has warned, though, against complacency as infections have now started rising in as many as 300 districts from fewer than 80 a week ago.

“The experience from other countries informs us that it is more practical to track/monitor hospitalisations rather than new cases,” said Rajib Dasgupta, head of the Centre of Social Medicine & Community Health at New Delhi’s Jawaharlal Nehru University.

Many cities and states, including Delhi, have nevertheless imposed night curfews. Delhi also locks down fully on weekends, and has closed private offices, schools and restaurants throughout the week.

India has administered two primary vaccine doses to nearly 70 per cent of its 939 million adult population but many still remain unvaccinated. This has worried officials especially as five states hold elections starting on Feb. 10.

The country reported 380 Covid-19 deaths on Thursday (13), more than 46 per cent of them fatalities in the southern state of Kerala not previously recorded. Total deaths have reached 485,035, only behind tolls in the United States and Brazil