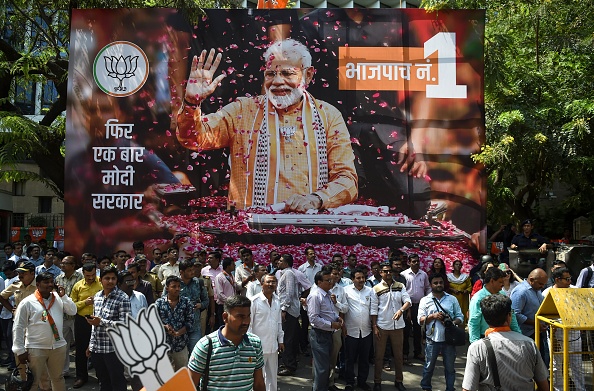 Supporters of Indian prime minister Narendra Modi and his ruling Bharatiya Janata Party (BJP) gather to celebrate on the election results day outside the BJP headquarters in Mumbai on May 23, 2019. (Photo: PUNIT PARANJPE/AFP/Getty Images)
Follow Us

The BJP’s main rivals Congress were on just 49 seats, with Rahul Gandhi — the great-grandson, grandson and son of three premiers — in danger of a humiliating loss in the seat held by India’s once-mighty political dynasty for generations.

“Together we grow. Together we prosper. Together we will build a strong and inclusive India. India wins yet again!,” Modi tweeted as the outcome of the world’s biggest election became clear.

The preliminary count predicts a commanding majority in the lower house for the BJP and its allies, who are on course for almost 50 additional seats.

They will still lack a majority in the upper house, however, putting a brake on Modi’s legislative agenda.

“Today’s mandate… shows that people of India have entirely uprooted casteism, nepotism and appeasement to choose nationalism and development,” tweeted BJP president Amit Shah, in a swipe at Congress and Gandhi.

Celebrations broke out at BJP offices including in Mumbai where a few hundred party supporters and workers danced, played drums, chanted slogans and waved party flags.

At Congress headquarters in Delhi, a handful of dejected supporters sat in groups under the shade of trees.

“We are sad but we will rise again. Modi won because of his lies and false promises. The country is in danger now,” Rajesh Tiwari, a Congress supporter, told AFP.

India’s main Sensex index breached the 40,000-point level for the first time as the count pointed to a Modi win, following strong gains since Monday.

“Time for transformation of India. Time for deep reform. I dream of us as a global superpower in my lifetime,” tweeted India’s richest banker, Uday Kotak, as he congratulated Modi.

The vast size of India — stretching from the Himalayas to the tropics, taking in polluted megacities, deserts and jungles — made the election a marathon six-week endeavour.

The campaign, estimated to have cost more than $7 billion, was awash with insults — Modi was likened to Hitler and a “gutter insect” — as well as fake news in Facebook and WhatsApp’s biggest markets.

Gandhi, 48, tried several lines of attack against Modi, in particular over alleged corruption in a French defence deal and over the desperate plight of farmers and the lacklustre economy.

But Thursday’s count showed his party had failed to bounce back from its historic drubbing in the 2014 polls.

“The Congress is a disaster. It hasn’t given any reason to vote for it,” Hartosh Singh Bal, political editor with The Caravan magazine, told AFP.

“The campaign was a disaster and now their very existence is under question.”

Unemployment is reported to be at a four-decade high, with Asia’s third-biggest economy growing too slowly to create jobs for the million Indians entering the labour market every month.

Modi, a former cadre in the militaristic hardline Hindu group Rashtriya Swayamsevak Sangh (RSS) and chief minister of Gujurat in 2002 when riots killed more than 1,000 people, most of them Muslims, is also seen as divisive.

Lynchings of Muslims and low-caste Dalits for eating beef and slaughtering and trading in cattle have risen, adding to anxiety among India’s 170-million-strong Muslim population.

Under Modi several cities with names rooted in India’s Islamic Mughal past have been re-named, while some school textbooks have been changed to downplay Muslims’ contributions to India.

But Modi, 68, managed to deftly turn the election into a referendum on his rule while depicting himself, often in the third person, as the only one able to defend India.

In this he was given a major boost when a suicide bombing, claimed by a Pakistan-based militant group, killed 40 Indian paratroopers in Indian-administered Kashmir on February 14.

Doubts abound about the efficacy of India’s subsequent air strikes on Pakistan, but the action enabled Modi to style himself the “chowkidar” (“watchman”).

“Wherever the terror groups and perpetrators may hide, our security forces will flush them out and punish them,” he thundered. “Every drop of blood of our slain soldiers shall be avenged.”