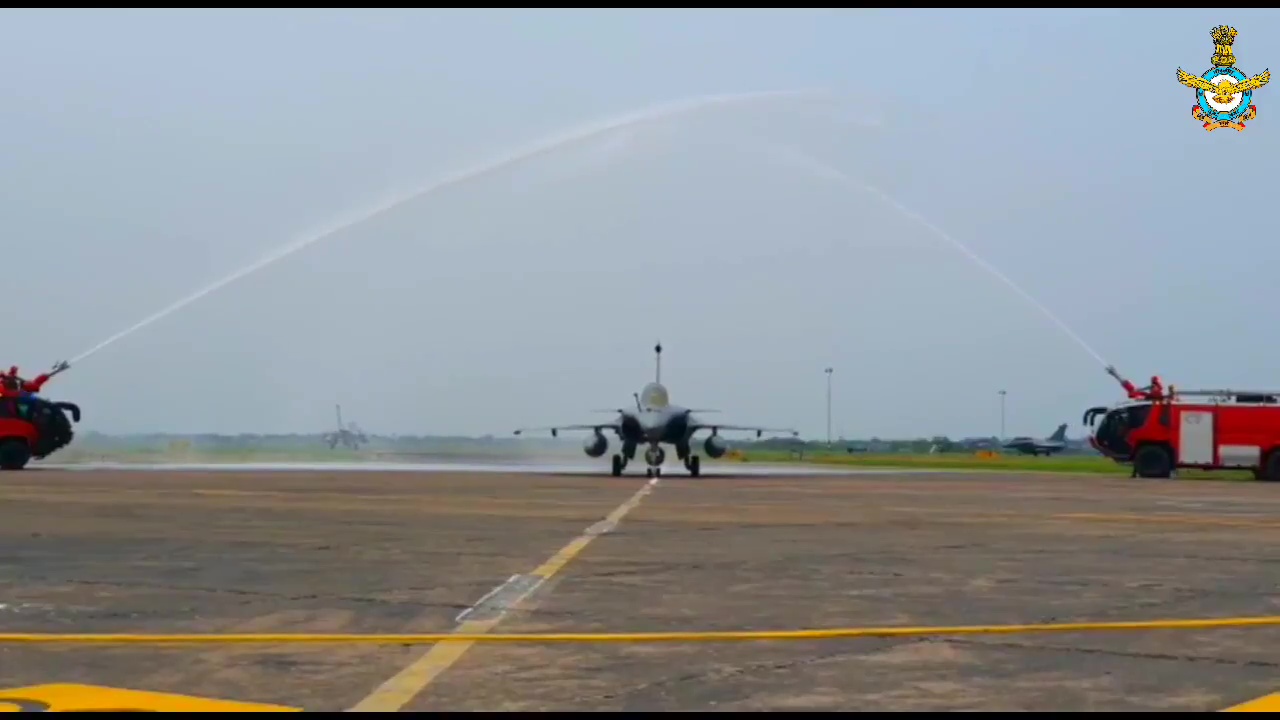 A water-cannon guard of honour greeted the five jets when they landed at the Ambala air base in Haryana state (Photo: Twitter)

THE first five Rafale fighter jets bought from France in a multi-billion-dollar deal landed in India on Wednesday (29) and the defence minister used their arrival to launch a veiled warning to neighbouring China over territorial tensions.

The five Rafales escorted by 02 SU30 MKIs as they enter the Indian air space.@IAF_MCC pic.twitter.com/djpt16OqVd

A water-cannon guard of honour greeted the five jets when they landed at the Ambala air base in Haryana state. An intense nationwide spotlight on the combat jets has been sharpened by a deadly border standoff with China.

The Touchdown of Rafale at Ambala. pic.twitter.com/e3OFQa1bZY

India has bought 36 Rafale fighters from France in a deal estimated to be worth $9.4 billion. All are scheduled to be delivered by the end of 2021.

Defence Minister Rajnath Singh said the combat jets’ arrival marked “the beginning of a new era in our military history”.

The jets will make the Indian Air Force “much stronger to deter any threat that may be posed on our country”, he added in a series of tweets.

He did not directly name China but media and observers said his comments were clearly aimed at the neighbouring giant.

“If it is anyone who should be worried about or critical about this new capability of the Indian Air Force, it should be those who want to threaten our territorial integrity,” Singh declared.

Indian and Chinese forces have been in a six-week-long standoff on their Himalayan border since a hand-to-hand battle in which 20 Indian troops were killed. China also suffered casualties in the showdown but has not given figures.

The two sides blame each other for the clash in the Ladakh region and have since moved thousands of troops there while pursuing talks that they say aim to ease the tensions.

India acknowledges it is behind China and other key nations in military firepower, and the purchase of the Rafale jets is one of many made in a bid to bolster its 1.4 million-strong army.

New Delhi has also been eager to update its ageing fighter-jet force amid tensions with nuclear-armed neighbours China and Pakistan.

Sameer Patil, an international security studies expert at the Gateway House think-tank, said the jets were a “much-needed capacity booster”.

“It will help India to deal with the heightened nature of the Chinese threat, as it becomes clear that the current territorial stand-off in Ladakh will stretch into the winter months.”

The purchase of the French jets marked a significant shift in India’s traditional preference for Russian defence equipment.

India’s main opposition Congress party had alleged corruption in the deal but the government strongly denied any misconduct and a top court said there was no evidence for an investigation.

French firm Dassault is in competition to sell more of the jets to India, which has said it will need more than 150 more combat aircraft for its navy and air force.