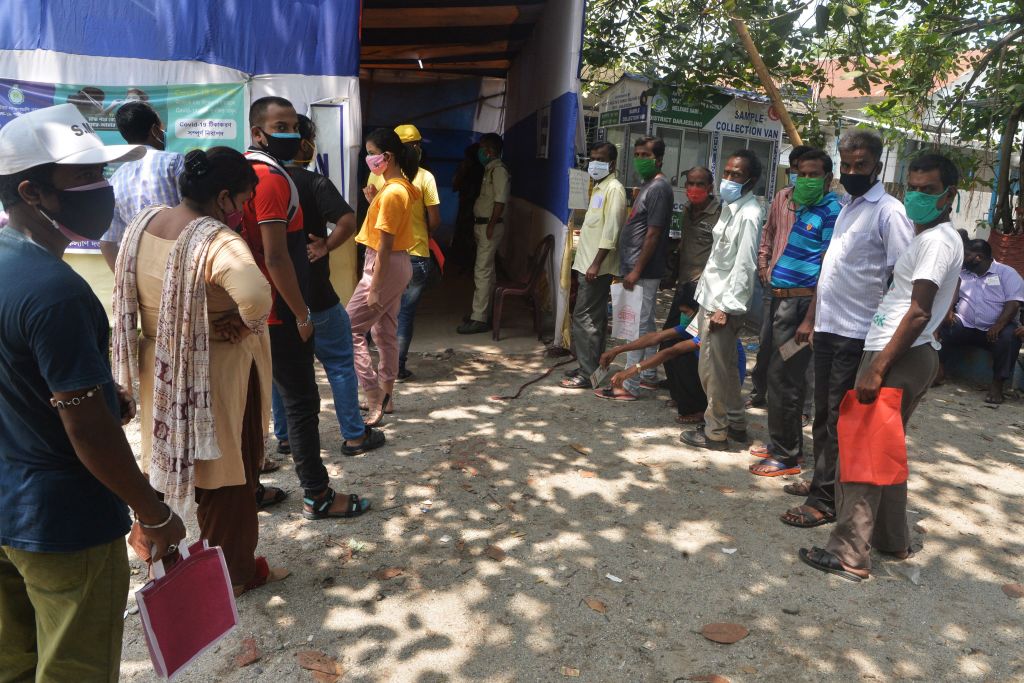 People over 18 years-old wait to receive a dose of the Covishield vaccine against the Covid-19 coronavirus at a primary health centre in Siliguri on June 2, 2021. (Photo by DIPTENDU DUTTA/AFP via Getty Images)

INDIA could have as many as 10 million doses of Covid-19 vaccines available per day in July and August, compared with just under three million now, the government said, trying to allay concerns about shortages and mishandling of the programme.

The world’s second most populous country has suffered a disastrous outbreak of infections since April that is only now abating and health experts say the only way it can avert another surge is mass vaccination of its 1.3 billion people.

“We don’t doubt that we will be able to increase the pace of vaccinations, once supply is ramped up,” government advisor V K Paul told reporters.

Vaccine manufacturers such as Serum Institute of India and Bharat Biotech are scrambling to boost supplies, with the country is also in talks with major foreign vaccine producers such as Pfizer Inc, officials have said.

The health ministry said nearly 45 million people had been fully vaccinated – 4.7 per cent of the country’s 950 million adult population. India administered nearly 2.8 million doses on Monday, according to data from its official vaccine portal.

Prime Minister Narendra Modi’s government has drawn criticism for a slow vaccine rollout even though India is one of the world’s biggest manufacturers of doses, including AstraZeneca’s shot.

Several states have complained of a shortage of the AstraZenca vaccines and another called Covaxin, developed by Indian firm Bharat Biotech.

Last month, the government ordered that the interval between two doses of AstraZeneca be increased to 12-16 weeks from 4-6 weeks, which experts said was because of tight supplies.

Paul said there was no plan to mix doses of different vaccines that some officials had suggested earlier. He also said everyone was recommended to take the full two doses of AstraZeneca’s vaccine and not limit themselves to one shot.

“India’s Covishield schedule is of two doses… there is no change, and Covaxin is also for two doses,” Paul said.

Balram Bhargava, head of the Indian Council of Medical Research, said: “Containment has worked. However, it is not a sustainable solution and we have to find a measure to ease the lockdowns.”