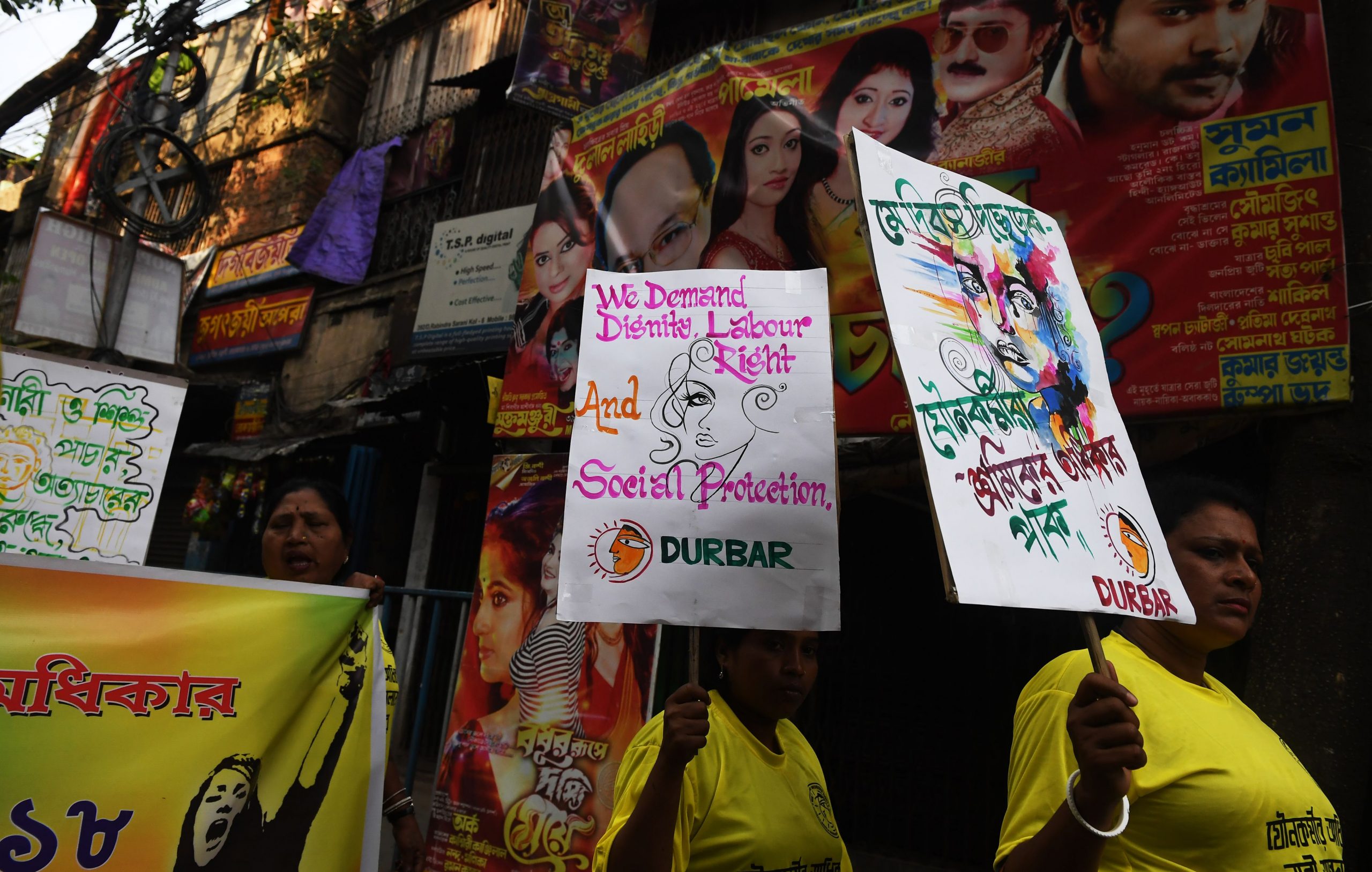 Former Indian sex-workers and social activists hold placards as they participate in a rally to demand their rights in Kolkata on April 30, 2018, ahead of the International Labour Day. (Photo by Dibyangshu SARKAR / AFP)
Follow Us

A ruling by India’s top court that sex workers should be given identity documents will have far-reaching benefits, allowing them to vote and access state food aid, campaigners have said.

Yet just how far-reaching remains unknown.

Official estimates suggest there are about a million sex workers in India, many of whom currently cannot vote, open bank accounts or access the food subsidies they are eligible for because they do not have identity documents.

But campaigners estimate almost half of India’s sex workers – among the most marginalised members of society – are not registered with the government, and not included in that figure.

The request came a week after the Supreme Court ordered the federal and local governments to start issuing ration and voter cards to sex workers on an official list and register them with the Aadhar biometric identification system.

“There are about 100,000 sex workers in official records, but there are at least 200,000 of them in the state so we asked authorities today to do a fresh count,” said Rammohan Nimmaraju, founder of HELP, one of the collectives in Andhra Pradesh.

“With a ration card, they can get rice at 2 rupees ($0.027) a kilo, be able to apply for land titles and if they have children it would help in school admissions that seek identity proof,” Nimmaraju told the Thomson Reuters Foundation.

“The benefits are endless.”

Selling sex is legal in India, but many sex workers are poor and most are exploited.

They are in most cases disowned by their families and do not have the documents they would need to apply for identity cards. They are disproportionately likely to move around or live in informal settlements, meaning many have no proof of residence.

When COVID-19 struck, sex workers around the world lost all their income overnight, underscoring the precarious nature of their industry. Many were subjected to violence and blamed for spreading the virus.

India launched state food and cash aid schemes to help informal workers during the pandemic, but many sex workers struggled to access such benefits because they did not have identity documents.

The National Aids Control Organisation (NACO), a government body that conducts health screenings and distributes condoms to sex workers who have registered with it, said it was trying to develop better counting and ensure improved access to benefits.

“We have about a million sex workers registered with us. I wouldn’t say they are the only ones, but this is what we can begin with,” said Shobini Rajan, deputy director general, NACO.

Rajan said NACO had provided food to about half a million sex workers in India without identity proof over the past year.

Now they are registered with food and supply departments in most states and are getting ration regularly, officials said.

“We instructed all our state units to engage civil society and community based organisations last year itself to better identify sex workers,” she said.

K Sandhya, a single mother of two, was trafficked into the sex industry about five years ago.

The 28-year-old said she had been trying to find other work to allow her to leave the trade, but was hampered by a lack of documentation, having left her only identity proof behind when she left her abusive husband and was abandoned by her parents.

“Only daily wage work is available,” she told the Thomson Reuters Foundation by phone from Andhra Pradesh.

“We struggled for aid during the lockdown. At least I won’t have to struggle as much any more once I have an identity document,” she added, saying she hoped she would now be able to access state aid schemes aimed at single women.

Last year the Supreme Court asked states to provide food aid to sex workers after a survey of 120,000 found fewer than half had benefited from a government food welfare scheme.

But campaigners said implementation had been patchy and that giving sex workers proof of identity would help.

Last week’s ruling stemmed from a petition by Durbar Mahila Samanwaya Committee, a sex workers’ collective in the eastern city of Kolkata, asking it to direct states to provide aid during the pandemic.

Sex workers in Kolkata said many of them had been issued ration cards during the pandemic surge and were hopeful of scoring bigger wins.

“We want to be linked to the labour department. We too need pension, health insurance,” said Sumita Das, 44, one of the collective’s 65,000 members.

The petition was organised by physician Smarajit Jana, the head of the collective, who died in May of COVID-19 related complications.

Tripti Tandon, the lawyer who represented the collective in court, said the ruling would have “far-reaching” effects.

“All these years, sex workers had basic lack of attention and apathy from states,” said Tandon. “This order makes sure sex workers can chart their own course.”