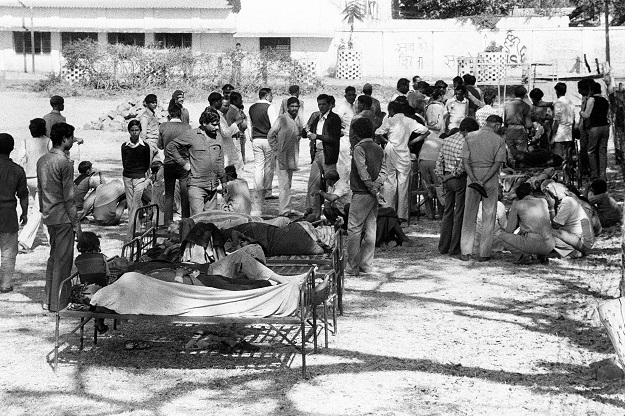 Victims of the Bhopal tragedy wait to be treated on December 04, 1984 at Bhopal's hospital where a poison gas leak from the Union Carbide factory killed 20000 persons and injured around 300000. The tragedy occurred when a storage tank at a pesticide plant run by Union Carbide exploded and poured cyanide gas into the air, immediately killing more than 3,500 slum dwellers (Photo: BEDI/AFP via Getty Images).

PROTEST marches and all-religion prayer meeting marked the 35th anniversary of the Bhopal Gas Leak tragedy in the central Indian city of Bhopal on Tuesday (3), with organisations working for the survivors alleging that successive governments have denied them justice.

Leak of 40 tonnes of deadly methyl isocyanate gas from Union Carbide’s pesticide plant here on the intervening night of December 2 and 3, 1984, killed over 5,000 people and injured thousands of others.

It is considered to be the world’s largest industrial disaster.

Organisations working for the survivors of the tragedy took out protest marches in Old Bhopal area, where the Union Carbide factory, now defunct, stands.

“No More Bhopal”, read placards carried by the participants during the procession from Bharat Talkies to the abandoned factory premises.

Children of survivors presented a musical drama about the tragedy, its fallout and the problems being faced by the survivors.

They demanded adequate compensation and proper medical treatment for the survivors, and stringent punishment for those responsible for the disaster.

Rashida Bee, president of the Bhopal Gas Peedit Mahila Stationery Karmchari Sangh, alleged that Dow Chemical, the current owner of Union Carbide, has the backing of the state as well as the federal governments.

Rachna Dhingra of the Bhopal Group for Information & Action said: “Till today there are no standardized treatment protocols for medical rehabilitation, no effective plans to provide gainful employment or monthly pension to the needy and no initiative to ensure safe living environment for the survivors of the disaster.”

Nousheen Khan of the Children Against Dow Carbide said industrial pollution is one of the top five causes of death worldwide, and environmental diseases are growing at an alarming rate.

“With the failure of our democratically elected governments, it is time for the world to take notice of the ongoing disaster in Bhopal,” Khan said.

Earlier, an all-religion prayer meet was held at Barkatullah Bhawan to pay homage to the victims of the gas leak.

Madhya Pradesh Governor Lalji Tandon and some ministers participated in the prayer meet.
“We all, as members of civil society, have the responsibility not to allow such a disaster to happen again,” said Tandon.

While unofficial estimates put the death toll of the tragedy at 22,917 as of 2010, the figure submitted by the state government to the Supreme Court is 5,295, and the government paid compensation only for them, said Dhingra.

There are tens of thousands of survivors who are suffering from cancer, blindness, respiratory diseases and neurological disorders as a result of inhaling the toxic gas, she claimed.