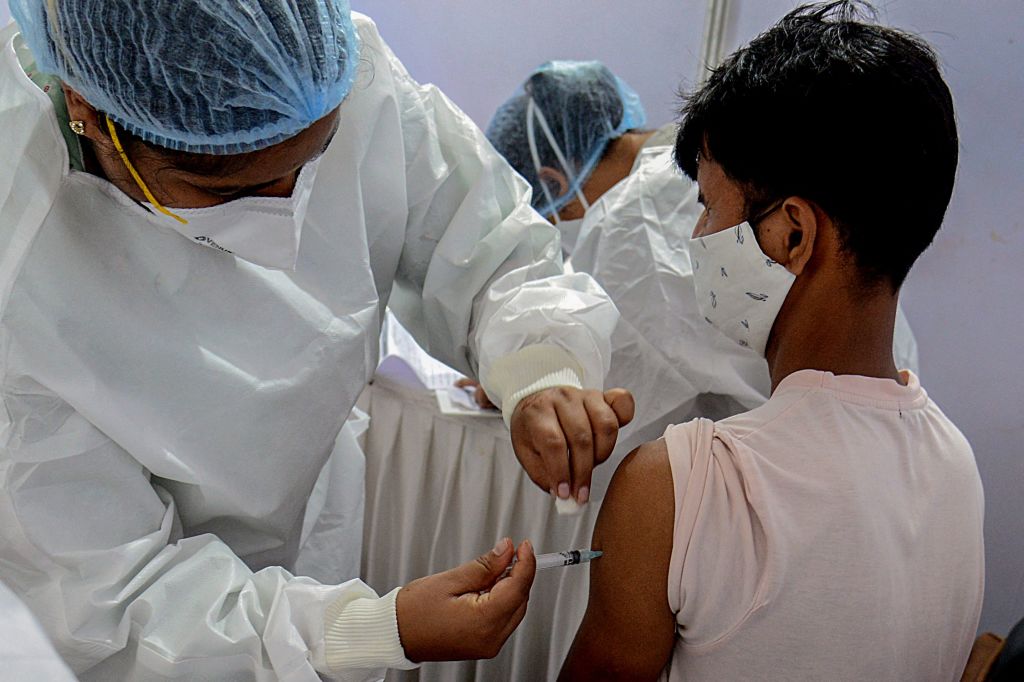 A health worker in India inoculates a man with the dose of Covaxin vaccine. (Photo by SUJIT JAISWAL/AFP via Getty Images)

BHUBANESWAR, the capital of the eastern Indian state of Odisha and its largest city, reached a milestone over the weekend. According to its officials, the city has succeeded in vaccinating its entire eligible population.

For a city with a population of more than 1.1 million, it is not a small feat. Bhubaneswar, which is also called the ‘temple city’ of India because of the presence of several hundreds of temples there, had been hit by a deadly wave of coronavirus infections earlier this year that left its healthcare system in a shambles, like the rest of the country. Many people failed to get beds in hospitals despite desperately requiring treatment.

Ansuman Rath, a top official of the city, on Monday (2) said that all adult residents of Bhubaneswar – numbering around 900,000 – had received the first of the two doses of the vaccine by mid-June and the milestone “pushed up” their morale, The New York Times reported.

“When we achieved that, we thought we must quickly give the second doses too, as case load was high at that time,” he said.

Odisha has seen almost a million people getting affected by the coronavirus while over 6,000 have died. The state has administered just over 17 million vaccines so far. India has so far vaccinated 1,066 million of its people, according to government data.

Bhubaneswar’s civic body called Bhubaneswar Municipal Corporation (BMC) has administered as many 1.87 million doses of vaccines till Monday. Out of them, 1.07 million have received the first shot while 0.8 have got the second one, PTI reported citing BMC officials as saying.

Under the 2011 Census of India, Bhubaneswar’s population was around 0.84 million and now it is expected to be around 1.1 million. According to the civic officials, given the fact that the vaccines are given to only those over 18 years of age, the city has achieved its target of 100 per cent vaccination.

Special drives to encourage people to get vaccinated

Rath said the city authorities campaigned in its slums to overcome people’s vaccine hesitancy and set up a dozen walk-in centres in order to help people without access to mobile phones or the internet and even a proper identification to get vaccinated with help of officials.

The inoculation drive started in January in Bhubaneswar but the beginning was slow because of a short supply of the Covishield vaccine, the locally manufactured version of the Oxford-AstraZeneca vaccine. The local administration, instead, relied more on Covaxin, the other major Indian vaccine which is locally manufactured.

When the devastating second wave of the pandemic hit India, the capital of Odisha was also not spared. The city saw more than 1,200 new cases and 30-40 deaths daily during March and April. Currently, Bhubaneswar is reporting less than 200 new cases and 10 deaths a day.

India on Tuesday reported more than 30,000 new cases and the daily positivity rate remained less than five per cent.