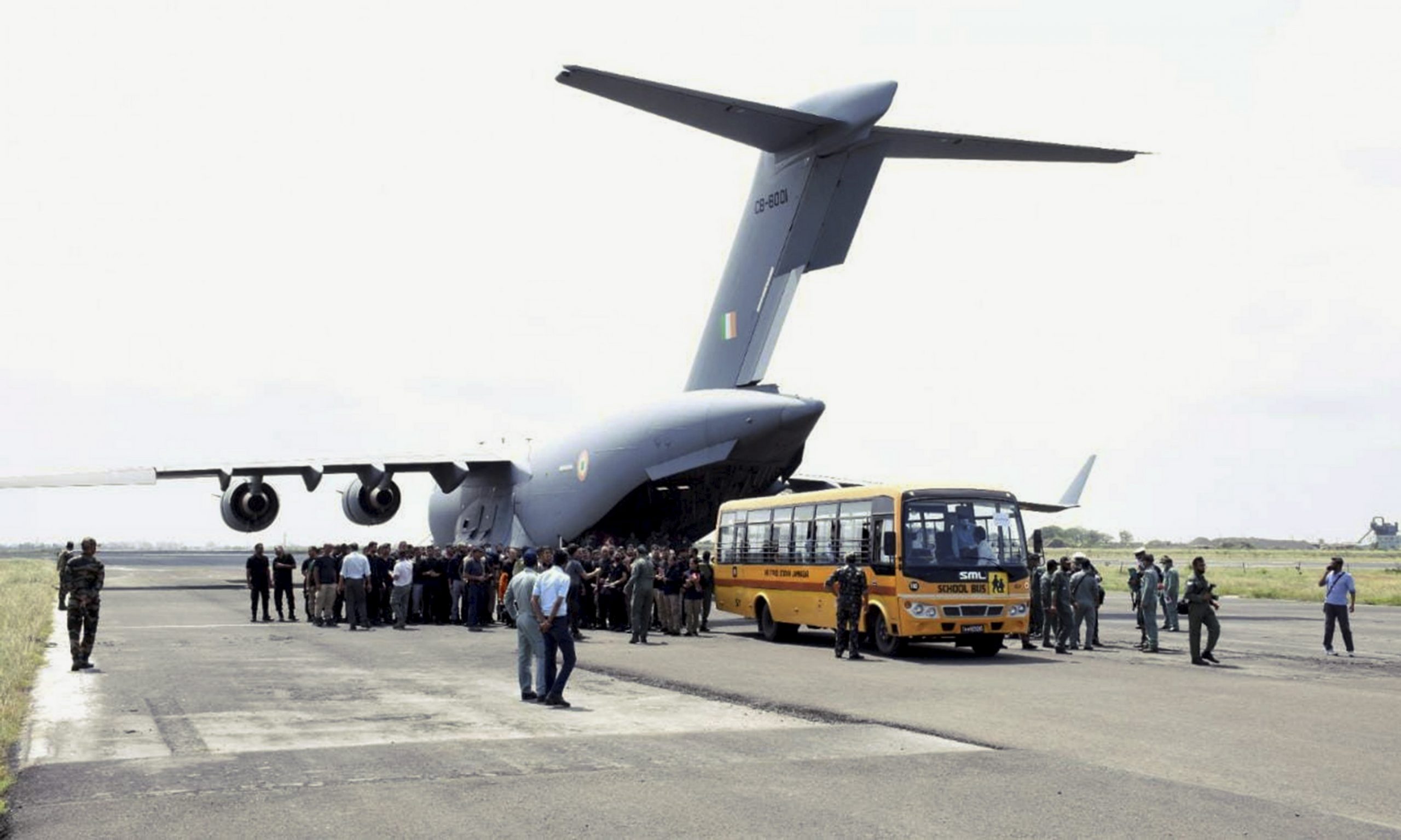 Indian nationals upon their arrival at Jamnagar from crisis-hit Afghanistan by an Indian Air Force’s C-17 aircraft. (PTI Photo)
Follow Us

INDIA on Tuesday (17) brought back its ambassador and staff at the embassy in Kabul in an Indian Air Force’s C-17 aircraft, after the situation became fluid with the Afghan capital falling to the Taliban insurgents.

Earlier in the day, External Affairs Ministry spokesperson Arindam Bagchi confirmed the news in a tweet.

In view of the prevailing circumstances, it has been decided that our Ambassador in Kabul and his Indian staff will move to India immediately.

The IAF transport aircraft left for India with over 120 people including officials and security personnel from the embassy. It was the second evacuation flight. On Monday (16), another C-17 aircraft had evacuated around 40 people including a number of Indian embassy staff from Kabul before the operations at the airport in the city were suspended.

Reports suggest, the two military aircraft flew into Kabul using the Iranian airspace while avoiding the route through Pakistani airspace.

Earlier, external affairs minister S Jaishankar, who is in New York on a four-day visit, spoke to US secretary of state Antony Blinken and discussed the latest developments in Afghanistan.

It is learnt that Jaishankar was also involved in hectic discussions including with US officials on the evacuation of the Indian officials from Kabul.

The US military had taken control of the security at the airport on Monday (16) after thousands of desperate people converged there in the hope of getting on an evacuation flight and leave the country.

Hours after Afghan president Ashraf Ghani fled Afghanistan on Sunday (15), the Taliban took control of Kabul, capturing back power nearly 20 years after a US-led military invasion ousted it in the aftermath of the 9/11 attacks.

Meanwhile, India on Tuesday (17) announced that it will issue an emergency e-visa to Afghan nationals who want to come to the country in view of the prevailing situation in Afghanistan.

All Afghans, irrespective of their religion, can apply for the ‘e-Emergency X-Misc Visa’ online and the applications will be processed in New Delhi.

Officials said since Indian missions in Afghanistan are shut, the visa can be applied online and applications will be examined and processed in New Delhi.

The visa will initially be valid for six months, they said. Security issues will be looked into while processing the applications and granting the visa to Afghan nationals, the officials said

Thousands of Afghans rushed into Kabul’s main airport on Monday (16), some so desperate to escape the Taliban that they held onto a military jet as it took off and plunged to their deaths.

In a series of tweets, Jaishankar also said that India is monitoring the situation in Kabul continuously.

“Monitoring the situation in Kabul continuously. Understand the anxiety of those seeking to return to India. Airport operations are the main challenge. Discussions on with partners in that regard,” he tweeted.

“Significant UN Security Council discussions today on developments in Afghanistan. Expressed the concerns of the international community. Expect to discuss these during my engagements at the UN,” he added.

In another tweet, he said the government is in constant touch with the Sikh and Hindu community leaders in Kabul, adding their welfare will get its priority attention.

“Given the Kabul situation, important we have accurate information about Indians there. Urge that this be provided by all concerned to the MEA Special Afghanistan Cell,” he said.