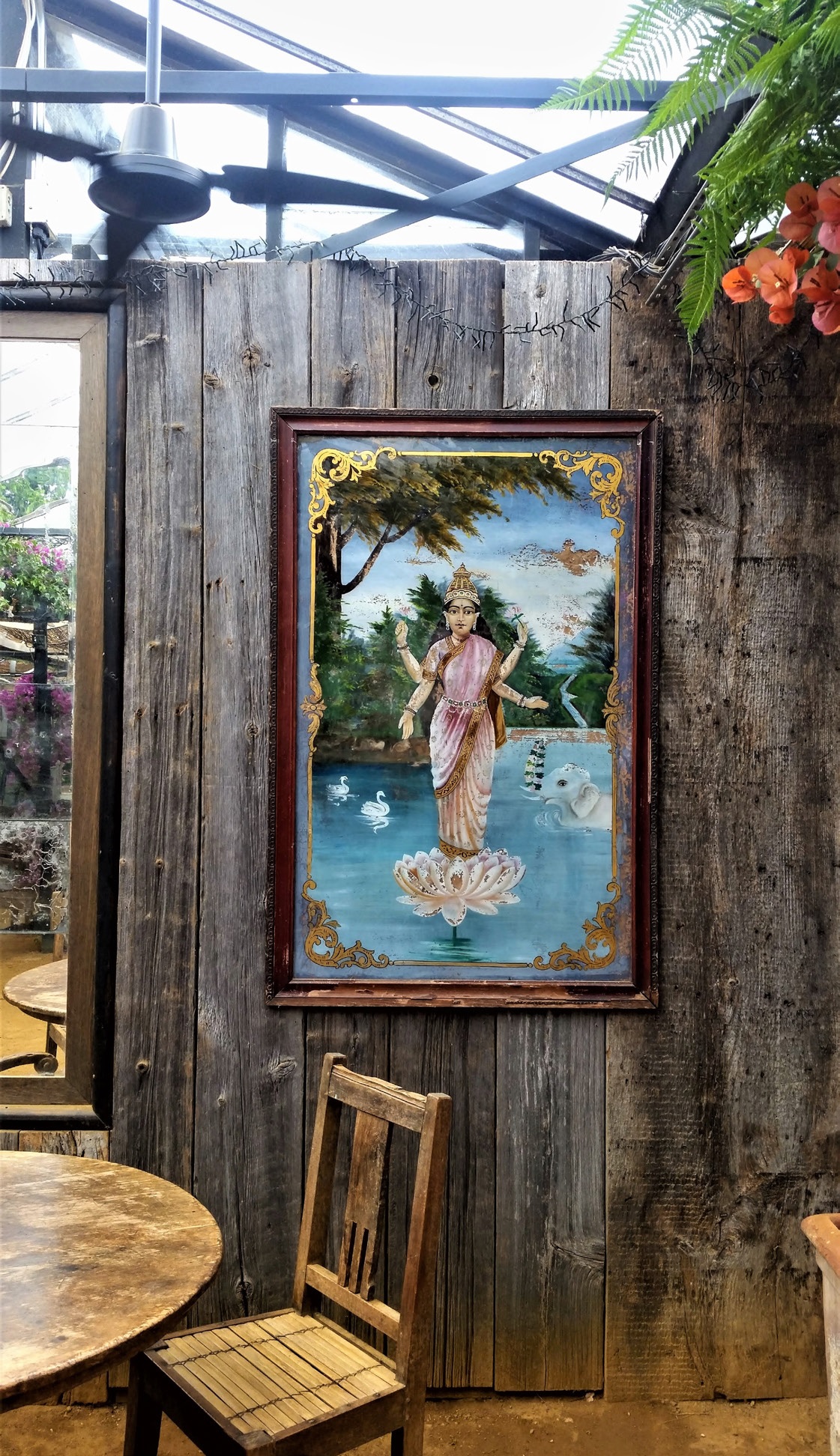 A picture of Lakshmi on the walls of Petersham Nurseries.

IF LAKSHMI or Ganesh wanted to come to Christian England at this time, they would probably be subject­ed to a lengthy quarantine, assuming the British High Commission in India were willing to give them tourist visas in the first place.

Who knows, but right-wing groups might also ob­ject to immigrants bringing in an infectious Hindu vari­ant of religion.

On a sunny day last week, we paid a family visit to Petersham Nurseries in Richmond. The setting couldn’t be more English, plugged in the Daily Telegraph as “the world’s poshest garden centre”. My satnav took me through Richmond Park, past dozens of cyclists and deer relaxing under the trees. The tiny single-lane entrance between two build­ings is easy to miss.

The smell of joss sticks in one nursery shop seemed curious, but the sight of framed images of the pantheon of Hindu gods caught me unawares. Rereading the three-page Telegraph article afterwards, I learnt that Peter­sham Nurseries is owned by “the Boglione family”, which includes papa Francesco; the “warm-hearted matriarch” Gael; and their children Lara, Harry, Anna and Ruby.

The place is worth a visit to see how Hindu gods have made themselves at home amid English greenery.

The family “bought the nursery in 2000, which is when the transformation be­gan,” the article says, adding, “That summer, Lara set off for a gap year around India – something Francesco had done 30 years before. He and the-then 15-year-old Anna joined her. ‘We spent a few weeks together, and as we were travelling, I would see things for sale and think, that terracotta pot would look great in the nursery,’ Franc­esco says. Before long, he had filled a container and shipped it back to London.”

His treasures set the aes­thetic. “The pieces he found have been fabulous to build on, although I didn’t want it to be just Indian-inspired,” Gael says.

All I can say is that the his­tory of stuff ordered in India – inlaid marble tables bought in Agra, for example – and arriving safely in Britain is not great. In this case, divine in­tervention must have helped.

I once gifted a little clay statue of Kali to my college tutor. He promptly put it on his window sill and announced the goddess would “su­pervise executions in Third Court for students who didn’t submit their work on time”.

I am encouraged by the example of Petersham Nurs­eries. Somewhere I, too, have posters of Hindu gods I col­lected in the bazaars of India for a few rupees. Hinduism – or rather Hindutva – has be­come a risky concept, but perhaps it is time for me to display my posters.

I have always liked having little statues of Ganesh dot­ted around the place. And Bengalis have a thing about Saraswati, the goddess of learning, to whom we prayed just before an exam. A two-inch statue of Saraswati sits just under my PC, making sure copy is filed on time.