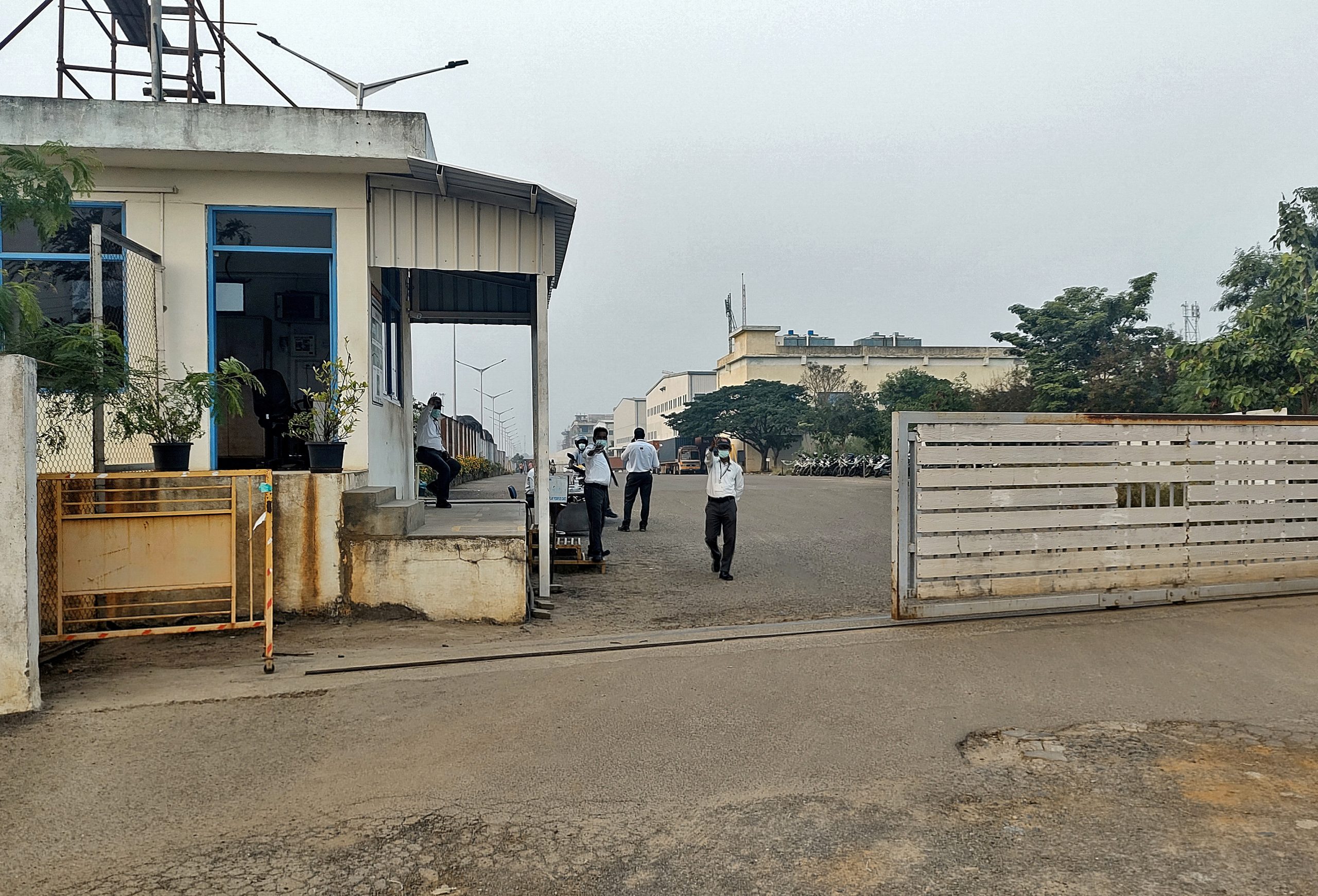 Private security guards stand at the entrance of a closed plant of Foxconn India, which makes iPhones for Apple Inc, near Chennai, India, on December 22, 2021. (REUTERS/Sudarshan Varadhan/File Photo)

The Foxconn plant, located in Sriperumbudur near Chennai in the state of Tamil Nadu, was closed on December 18, following protests over 250 of its workers suffering food poisoning.

Apple has since placed the factory on probation after discovering that some dormitories and dining rooms did not meet the required standards.

“Foxconn is still working with Apple to ensure compliance, which they expect to take up to two days…,” the official said, adding that the state government had cleared restarting the plant for production.

Foxconn and Apple officials did not immediately respond to requests for comment.

Officials at two staffing agencies contracted by Foxconn to hire workers said the company had not communicated to them when production at the factory will resume.

Two workers at the factory said neither Foxconn nor the staffing contractors had communicated the date of reopening.

Foxconn’s factory hit headlines recently over mass-food poisoning at its offsite dormitory facility, an incident that led to workers’ protest.

The company, which admitted that some of its facilities did not meet the required standards, said it was restructuring the local management team and systems.

“We found that some of the remote dormitory accommodations and dining rooms being used for employees do not meet our requirements and we are working with the supplier to ensure a comprehensive set of corrective actions are rapidly implemented,” Apple spokesperson said last week.

Media reports said the conditions were pathetic at the factory which is characterised by poorly ventilated dormitories housing up to a dozen people with no proper access to water or sanitation.

According to a Times report, a worker complained of intense work and long hours for the equivalent of £100 a month, rotting vegetables and weevil-infested rice prepared in rat-infested outdoor kitchens overflowing with rubbish.

Despite the conditions, the factory workers said they were scared to speak out for the fear of losing their jobs.

“In a room where more than five people can’t sleep, 15 of us sleep on the floor. We stick to one another. Water is open for us only one and a half hours before our shift. If we don’t save water for later use, we cannot use the toilets. Some women stay hungry throughout the day. There have been worms in our food and we sent photos to the supervisor, but no action was taken,” a 21-year-old worker told the Hindustan Times.

Some 15,000 workers, mostly women, live and sleep in seven or eight barracks located around the factory.

Apple’s Taiwanese suppliers are no stranger to controversies in India. In 2020, workers went on a rampage at Wistron’s manufacturing plant at Narsapura near Bangalore, accusing the company of delaying the payments of their salaries and overtime wages.