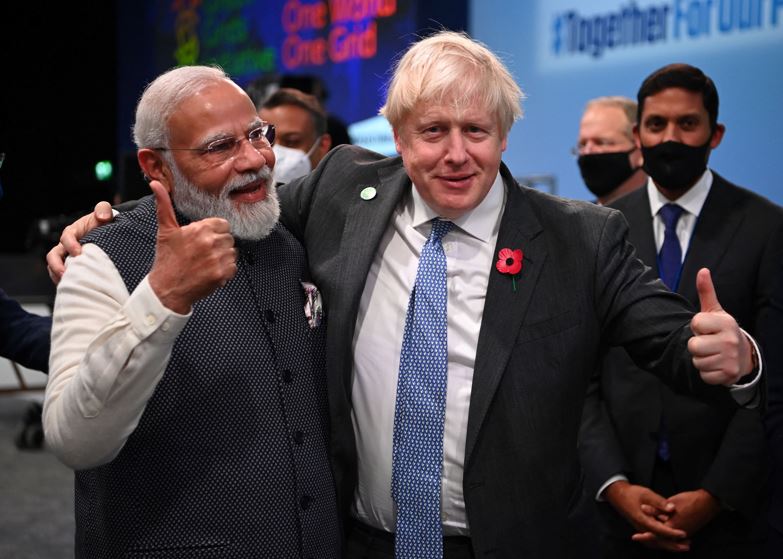 Narendra Modi and Boris Johnson at COP26 in Glasgow

CURRENTLY, an unprecedented, politically driven commitment towards the transformation of the India-UK relationship is taking place.

This began with the virtual summit between the two prime ministers Boris Johnson and Narendra Modi on May 4, 2021.

The new UK foreign secretary, Liz Truss, visited New Delhi and Mumbai in late October to prioritise security and trade; while the outgoing chief of the defence staff (CDS) and the first sea lord (the incoming CDS) also travelled to India, the latter to mark the arrival off Mumbai of the Carrier Strike Group (CSG), led by the HMS Queen Elizabeth aircraft carrier.

India is now one of the top three countries for a post-Brexit UK (since January 1, 2021), which is seeking a foreign and economic policy independent of the European Union in its ambition towards becoming a ‘Global Britain’.

For India, the UK is an important partner in its world view of greater multi-polarity. The UK’s subsequent ‘tilt’ towards the Indo-Pacific region and India’s heightened tensions with China after the Galwan clashes in June 2021 provide significant opportunities for cooperation.

In his first public speech at the International Institute for Strategic Studies (IISS) on November 30, the chief of the UK’s Secret Intelligence Service (SIS or MI6) stated that the rise of China was “the single greatest priority” for his agency.

As defence and security ties are vital for the transformation of bilateral relations, they have been elevated as one of five key ‘pillars’ of the India-UK Roadmap to 2030 (as agreed in the bilateral meeting in May).

This unique document, a first for both countries, seeks to ensure a ‘comprehensive strategic partnership’ within the next decade.

Yet, much more political attention, as well as bureaucratic action and implementation, is required if these ties – and consequently, bilateral relations – are to be transformed. And military and security ties need to be further strengthened.

Military-to-military ties are deep, with bilateral exercises taking place with the army, navy and air force. The CSG carried out its first bilateral tri-service exercise with India’s armed forces in the Arabian Sea; and a new official maritime dialogue began in November. New port logistics and training MoUs are waiting to be signed.

Both navies could also cooperate bilaterally on specific anti-piracy patrols off the Gulf of Aden rather than separately, as is the current norm. Their unique privileged access to the strategically located Duqm port in Oman provides significant joint opportunities, including exercising together in the area as well as multilaterally with the US or/and other regional navies of the Gulf.

Cyber-security cooperation could also be enhanced. Both India and the UK share a common vision and principles for cyberspace. Following India’s ministerial participation in the London Conference on Cyberspace in 2011, four cyber dialogues have taken place between the two foreign ministries.

In April 2018, a five-year ‘framework agreement’ was signed during Modi’s visit to London. Last month, the first meeting of the foreign ministry-led Joint Working Group on Cyber Deterrence was held virtually.

Both sides also need to engage more deeply on countering online radicalisation, extremism and terrorism, all made more urgent with the Taliban seizure of Afghanistan in August.

Counter-terrorism cooperation was formally institutionalised in 2002 with the establishment of the foreign ministry-led Joint Working Group (JWG) on terrorism, and its 13th meeting took place in London in November 2019.

Both countries have reiterated their call for Pakistan to bring the perpetrators of the 2008 Mumbai terror attack to justice.

But India remains suspicious about the UK’s support to Pakistan, including in relation to Afghanistan; as well as Britain’s inability or unwillingness to curb violent protests by pro-Khalistani and Kashmiri groups outside India House in London.

In contrast, Russia, the US, France and Israel remain India’s most trusted defence partners – Russian arms accounted for 56 per cent of India’s total arms imports between 2015 and 2019. This was most visible during Russian president Vladimir Putin’s recent visit to India, the first ‘2+2’ strategic dialogue between the two foreign and defence ministers, a slew of defence agreements and an extension of their military technology cooperation for the next decade.

Although a Defence and International Security Partnership (DISP) was established during Modi’s visit to the UK in November 2015, serious ongoing problems in the defence supply chain involving military aircraft need to be urgently resolved to rebuild trust in the defence partnership.

These problems are exacerbated by exaggerated Indian perceptions of the UK government’s influence over the country’s defence majors, as compared to such links in the US, Russia and France.

Yet, overcoming these problems will likely require facilitation by the political and bureaucratic leadership in the UK.

For India, defence technology co-creation and co-development to meet its ambition of ‘Make in India’ and ‘Atmanirbhar Bharat’ (self-sufficient India), and exporting to the world, are fundamental.

As a result, in April 2019, the Defence Equipment Cooperation (DEC) memorandum of understanding (of 2007) was strengthened to identify mutual defence and security capability needs and to support long-term defence cooperation.

Yet, there remain concerns in the UK over the ‘leakage’ of sensitive technology to India’s steadfast defence partner Russia, considered to be Britain’s most “acute threat”. This currently prevents any meaningful cooperation on the transfer or sharing of intellectual property rights (IPR), critical for defence technological development and manufacture.

The UK’s adherence to its nuclear treaty obligations also results in the denial to India, albeit of a very small percentage, of technology perceived to be of ‘dual use’. The absence of a formalised government-to-government framework for defence supplies, at a time when most of India’s significant arms purchases do not take the form of direct commercial sales, is also a shortcoming.

Moreover, a meeting of the bilateral Defence Consultative Group (DCG) of the top officials of the two defence ministries (set up in 1995) has not taken place since March 2019.

All these challenges require the urgent attention of the UK and Indian defence ministers, if defence and security ties between the two sides are to be transformed. The last visit of the UK defence secretary to India took place in April 2017. If India’s defence minister, Rajnath Singh, visits the UK in early 2022 as scheduled, it will be a ‘historic’ visit, marking the first cabinet-level defence ministerial visit to the UK in 20 years.

Rahul Roy-Chaudhury is a senior fellow for South Asia, at the International Institute for Strategic Studies (IISS) in London