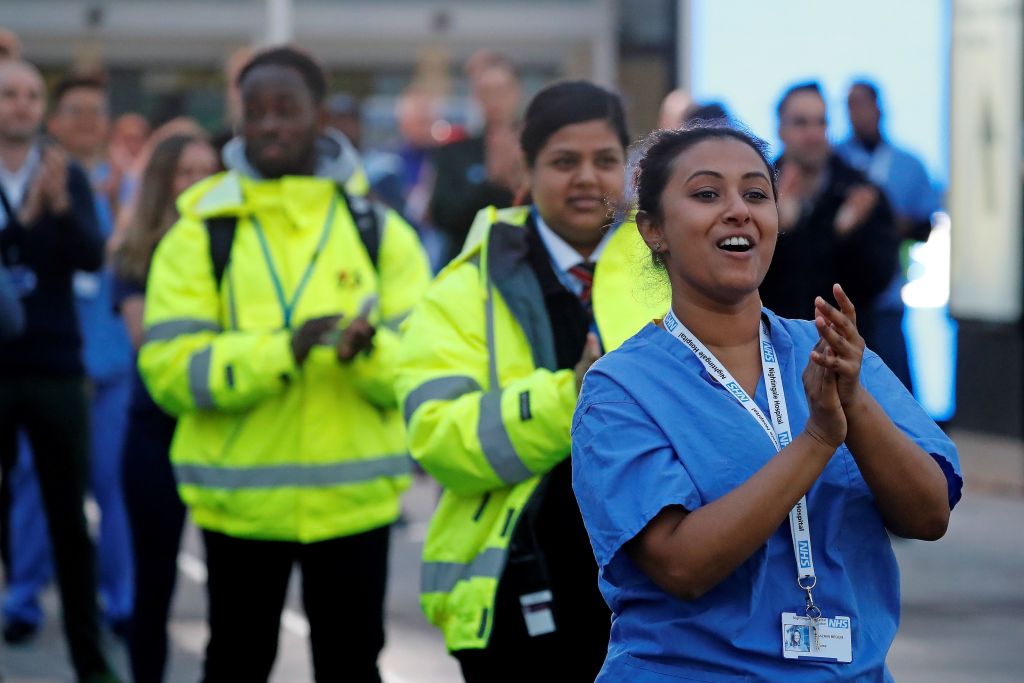 Medical staff and workers take part in a national “clap for carers” to show thanks for the work of Britain’s NHS (National Health Service) workers and other frontline medical staff around the country at the “NHS Nightingale” field hospital in London on April 30, 2020. (Photo by TOLGA AKMEN/AFP via Getty Images)
Follow Us

THE birth of the National Health Service (NHS) took place in Trafford, Greater Manchester, on July 5, 1948.

The father of the NHS, Aneurin Bevan, described it as “a great and novel undertaking”, and the stuff of history. Staff from black and minority ethnic (BAME) backgrounds have been essential to the NHS throughout its history.

Last week, the BBC programme Our NHS: A Hidden History by David Alusoga, provided a fascinating and often appalling insight into the racism –sometimes subtle and sometimes anything but –faced by doctors and other healthcare staff arriving in the UK to serve in the NHS.

But it also serves as a chilling warning of where the government is trying to take this country. While many will rightly be horrified at the casual and frank racism of decades past, they should be just as appalled at the current direction of this country, which is happening almost entirely unchallenged.

And BAME doctors are less likely to pass professional examinations than white doctors, despite this being identified as an issue for many years. It would be hard to argue that this marked difference in failure rates is a matter of chance, diligence, or intelligence.

A recent paper by the RCP (Royal College of Physicians) found that doctors from ethnic minority groups have to apply for many more consultant posts than white doctors to secure a job.

You cannot help but think that the improvements we so wanted to see were only skin deep, and the colour of our skin determines how we fare in an unjust system.

Since I arrived in UK in 1978, I have encountered racism of all sorts, including being called a ‘P*** doctor’. I was also physically assaulted in a pub near my hospital by skinheads. Then one encounters barriers of language, culture, and understanding.

Everything is absolutely foreign and you learn interesting things when you are trying to get used to it, especially when coming to Liverpool.

Once when I was in A&E, a lady came with a small abscess. I told her, ‘The abscess has not matured yet, I’ll give you some antibiotics and you come back in four or five days.’ She was very agitated and started shouting, ‘I want ‘to… die’, I want to die’. I didn’t know what was going on. So, I asked the nurse in charge to come and said, ‘I’m trying to do what is best for her and she is shouting and screaming’. The nurse said, ‘She is not saying that she wants to die, she is saying that she wants it today’! I was pulled up by a white consultant for my
poor communication skills.

I wanted to be a paediatric consultant but was told bluntly that this speciality was not for International Medical Graduates (IMGs). I was advised by well-meaning white senior doctors to either choose a less popular speciality like geriatrics, psychiatry, and accident & emergencies, or to pick up a career in general practice.

As a GP trainee in a white practice, patients refused to be seen by me. After I qualified as a GP, I struggled to get partnerships and allowed myself to be exploited as a salaried doctor with bare minimum wages. Even when I was in senior positions in the NHS and the British Medical Association (BMA), I continued to suffer from institutional racism.

Many IMGs like me, who have been the workhorses of the NHS, are over-represented in the lowest-paid, least-glamorous specialties in the least popular parts of the country. Some of them have faced racism, get less recognition for awards and slow promotion in their working life.

To add insult to injury, IMGs from a BAME background have a higher rate of receiving high-impact decisions from the GMC than their white counterparts. We rarely talk about racism in medicine, but it hurts like hell and damages the NHS.

Nevertheless, I am one of the lucky ones. Having trained in India, I went on to have a successful and rewarding 40-year career in the NHS and became chair of Tameside and Glossop primary care trust. I also lead an active role in the BMA and am currently honorary vice-president, elected director and a member of the BMA Council.

One of the proudest moments of my life was being awarded an OBE for services to the NHS.

But, as depicted in Our NHS: A Hidden History, many BAME communities’ experiences of the health service are quite different to mine, and to those of the white British population. Survey after survey by many independent organisations in the UK prove that BAME workers are grossly underrepresented in senior management, but disproportionately involved in disciplinaries, grievances, bullying and harassment cases and capability reviews.

During the pandemic, we witnessed many BAME doctors and nurses literally sacrifice their lives giving care to needy, Covid patients.

There is no denying the fact that the BBC documentary by Alusoga was an education – but it must also be a wake-up call.