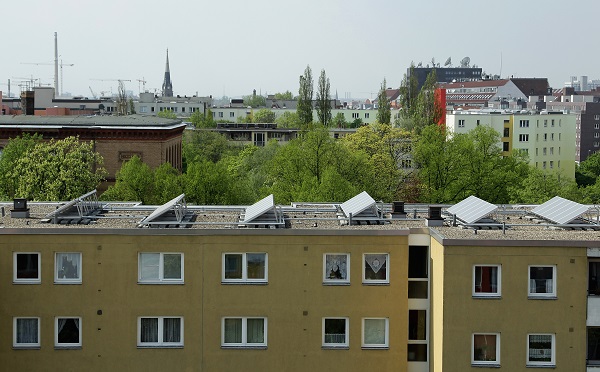 The initial cost of installing a solar panel system and connecting it to the existing electricity supply can seem expensive, but you will recoup the costs over time. Based on estimates from the Energy Saving Trust, a typical 4 kWp solar PV system will save you between £85 and £220 every year (Photo: Andreas Rentz/Getty Images).

A NEW ‘planet-saving’ green standard is set to bring an environmental revolution to homes.

The move, announced by the government earlier this month, will make it mandatory for builders to install things like solar panels instead of traditional boilers and is designed to tackle climate change while keeping household bills low.

Currently, new and existing homes are responsible for around a fifth of greenhouse gas emissions in the UK.

The government hopes that slashing emissions from new homes will enable the country to meet its net-zero emissions target by 2050.

Unveiling the Future Homes Standard, housing secretary Robert Jenrick said polluting fossil-fuel heating systems such as gas boilers would be banned from new homes by 2025. It will be replaced with the latest generation of clean technology, such as air-source heat pumps and cutting-edge solar panels. 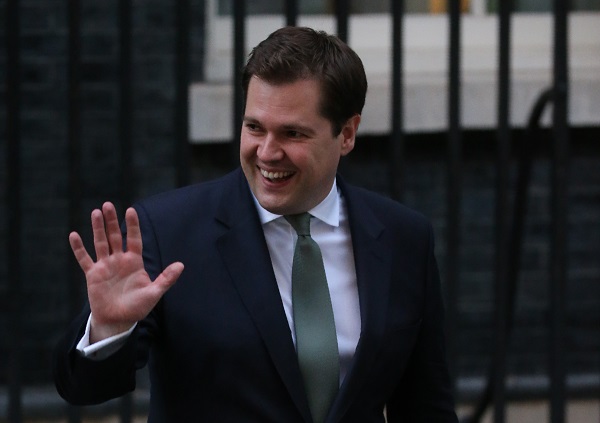 Jenrick added: “Building new homes isn’t just about bricks and mortar. I want to ensure everyone, including developers, do their bit to protect the environment and give the next generation beautiful, environmentally friendly homes that local communities can support. That’s why I am requiring carbon emissions are cut by up to 80 per cent from 2025 for all new homes, and have published a National Design Guide, setting out simply what we expect from new developments.”

Views are being sought on how changes to building regulations can drive down the carbon footprint of homes built after 2025, including changes to the ventilation and efficiency requirements as well as the role of councils in getting the best energy standards from developers. The consultation will run until January 2020.

Homeowners could potentially save on their energy bills as developments in the fabric of buildings, such as wall insulation and heating, help drive down the cost of keeping homes warm.

The move comes as a growing number of Britons say they want to do their bit for the environment by making their homes more eco-friendly amid growing concerns over climate change.

Solar panels
One of the most popular ways of cutting the carbon footprint of a home is by installing solar panels as these reduce a lot of the natural resources that go into generating electricity.

A spokesman for Manchester based Evergreen Energy Ltd said: “Contrary to popular belief, solar panels are more than suitable for the UK’s climate. They can generate significant amounts of electricity even on overcast days, while exceedingly high temperatures in other countries interfere with the chemical process inside the solar cells, reducing the electric output. Solar panels don’t need much to operate beyond plenty of natural light.”

That being said, if you are thinking of installing solar panels, you will need to check that your home meets certain requirements. These include enough roof space to accommodate the number of solar panels you will need for your electricity requirements, and space in the loft for an inverter, which is roughly the size of a microwave. 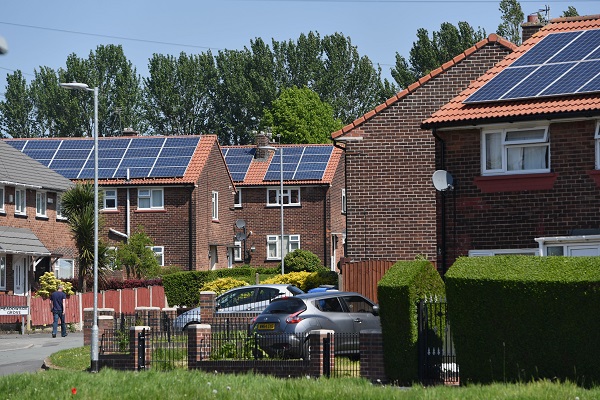 Ideally, your roof would be facing south to generate the most electricity, but it’s still worth installing solar panels on east or west-facing roofs, as the loss in output is only minor (around 15 per cent). However, solar panels may not be the best choice for those with a north-facing roof or if your house is largely shaded from the sun.

There are also options for those who can’t afford solar panels – renting roof space to energy companies. One such scheme is Rent-a-Roof.

The initial cost of installing a solar panel system and connecting it to the existing electricity supply can seem expensive, but you will recoup the costs over time. Based on estimates from the Energy Saving Trust, a typical 4 kWp solar PV system will save you between £85 and £220 every year. Perhaps more important than this modest saving is the environmental benefit. It is estimated that a standard household solar PV system in southern Britain saves almost 1.2 tonnes of CO2 every year, equivalent to the amount of CO2 emitted by an economy-class passenger on a return London-New York flight.

Heat management
If installing a full set of solar panels (or for that matter, building a brand-new abode out of bio-degradable materials) is not for you, do not despair. There are a large number of ways to make your house planet-friendly without a bankbreaking outlay.

People are often surprised at how even the smallest changes to a home can make it more eco-friendly. A good place to start reducing your home’s carbon footprint is by managing your heat waste.

Check that your roof, walls and floors are properly insulated as these can account for a massive amount of heat loss, not to mention higher energy bills. Use thick curtains on windows to conserve energy, and fitting draught excluders on doors, windows and letterboxes will also help lower your carbon footprint.

If your budget permits, instal dual pane windows as these will reduce heat loss and make your cooling and heating systems far more energy-efficient.

When upgrading windows, remember that wooden window frames are more environmentally sustainable than other materials such as UPVC.

Lighting
If you do not instal solar panels in your house, there are still ways of consuming significantly less electricity. Top of the list are energy-saving bulbs which use just a 10th of the power of old bulbs, while lasting around two times longer.

Over recent years, traditional light bulbs have been gradually phased out with the result that the average UK household now uses nearly a third less electricity to light their home than they did in the 1990s.

However, energy-saving bulbs come in a range of shapes, sizes and brightness and they are not all equally efficient at saving energy. 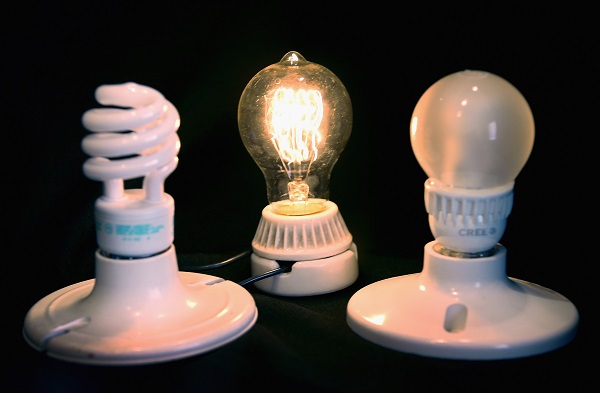 Halogens are more efficient than oldstyle incandescent bulbs, but they are now considered high-energy bulbs and their sale has been phased out since 2016.

CFLs are now extremely common and are what most people probably think of as a typical ecologically-friendly bulb. They often come in tubular or looped shapes, though CFLs in traditional bulb shapes are increasingly available.

These bulbs used to have a reputation for poor light quality and for taking time to get to their full brightness. Nowadays CFLs are much improved, though they are not as energy efficient as LEDs.

LEDs, which have been around for years as little lights on TVs and as bicycle lights, are the most efficient bulbs available. They reach maximum brightness immediately, are dimmable and are sold in a wide variety of colours, including hues close to traditional incandescent bulbs.

LEDs can be expensive, but this is more than made up for by their very low energy consumption, which is up to a 10th of the equivalent halogen bulb. This means they can save users an average of about £60 during a 10-year lifespan.

Rain-water harvesting
One of the myths surrounding solar energy in the UK is that our weather simply isn’t hot enough to make it viable. But when it comes to exploiting one of nature’s most abundant resources – water – there are fewer obvious arguments against.

Britain is awash – no pun intended – with free water in the form of abundant rainfall. It is perhaps surprising then that so few of us think about exploiting this aspect of our weather.

In this age of water meters, it makes ecological and environmental sense to harvest the rainwater that falls in your garden, helping to pay household bills and saving the environment into the bargain. 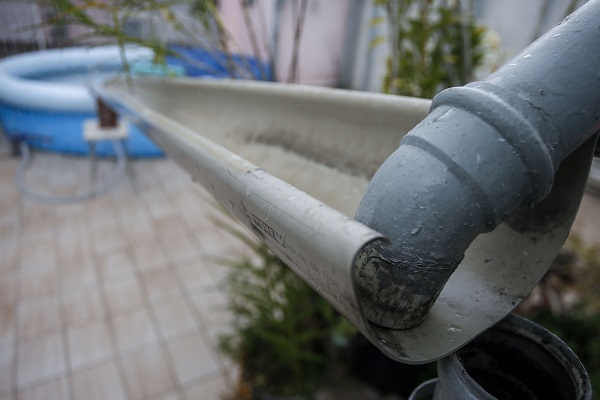 Formerly these rain-water harvesting systems (RHS) were used for little more than watering the garden, but RHS technology is more sophisticated now. It can be plumbed directly into your home’s existing pipework and the rainwater can then be deployed for flushing loos and in the washing machine, slashing water consumption by around 40 per cent.

According to the Rainwater Harvesting Association, it costs about £2,500 for a 2,700 litre tank, and you should expect to pay no more than £1,000 for installation by a competent plumber or builder. The only other cost is about 20p a week to cover the energy needed to pump the water up out of the tank and around the house.

For the purist who would rather not rely on extra energy consumption, however minimal, a tank installed in your loft that relies on gravity alone for power should be considered.

This works by harvesting water directly from the roof via a specially installed drain at a total cost of around £2,000. The disadvantage of this system, though, is that an internally fitted tank will be smaller than an external one, so during the summer when it doesn’t rain for long periods, you’ll probably need to depend on your mains water system.

Every little helps
Every initiative helps when it comes to the environment, so any green-conscious householder should check the energy efficiency of their household appliances.

All home appliances have star ratings and the higher the number of stars, the more energy-efficient the appliance.

When you buy a five-star rated air conditioner, it means it will consume less energy than a two-star or three-star version. The same goes for other electronic gadgets also.

With climate change the biggest threat to the planet, more and more young people are becoming concerned for the future and wanting to make efforts to reduce their carbon footprint. 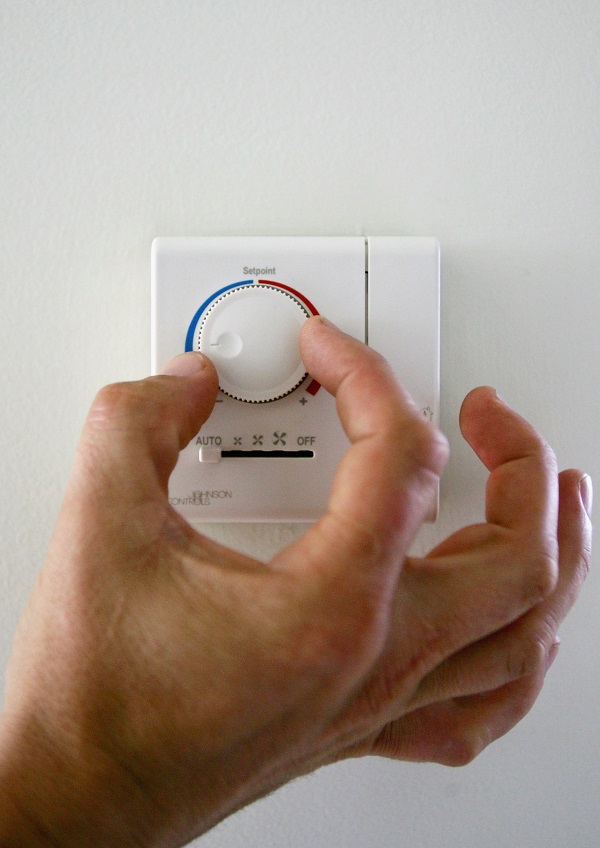 If you have children of university age, you might consider helping them rent new-build student accommodation as this is designed to be more eco-friendly and energy-efficient than older student flats. The downside, though, is that purpose-built new student flats can be significantly more expensive. So it is worth considering how they can be more environmentally-friendly without breaking the bank of mum and dad.

The first thing is to encourage them to buy secondhand. They may be used to ordering the coolest new products via the internet, but why not encourage them to save the planet’s resources and cut waste by kitting out their flats with secondhand items? They will be saving lots of money by not buying new, while doing their bit for the environment.

Reduce your energy consumption
Keeping yourself warm when the weather is cold, and cool when the weather is hot is one of the biggest domestic contributors to climate change. Heaters and air conditioning use large amounts of energy and are not easy to live without.

But whenever possible, the environmentally conscious individual should limit using them. As far as possible, use fans rather than air conditioning and wear extra layers of clothes rather than turning up heaters.

Finally, try to cut your use of chemical-based household products as these tend to be harmful to the environment. Substituting natural or non-toxic home cleaning products is another way to help make your home more sustainable. There are many natural cleaning products on the market, while simple products like vinegar and bicarbonate of soda can get excellent cleaning results at a fraction of the price of the big brands.