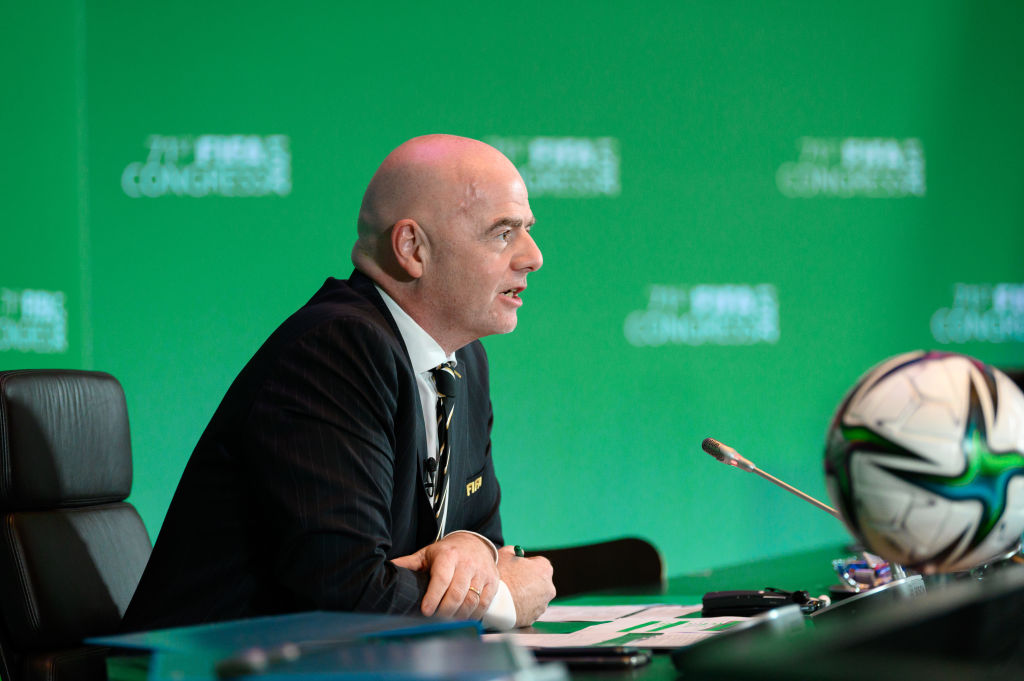 FIFA President Gianni Infantino speaks during 71st FIFA Virtual Congress meeting at the Home of FIFA on May 21, 2021 in Zurich, Switzerland. (Photo by Pool/Getty Images)

FIFA has launched an overhaul of the international football calendar beyond 2024, saying it is open to “everything” including the organisation of a World Cup every two years, despite opposition from wilting players and fears over a devalued product.

The 71st FIFA Congress voted by a large majority to carry out “a feasibility study on the consequences of the organisation” of World Cups for men and women “every two years”.

No deadline has been set for such a controversial reform to the sport’s crown jewel, the main income generator for FIFA since its creation in 1928, and which has been contested every four years since 1930 for men and 1991 for women.

FIFA’s football development chief Arsene Wenger suggested in March that the World Cup, the European Championship and other international tournaments be held every two years.

It was an idea dubbed “unrealistic” by European Leagues, a body which groups 37 leagues and club associations in Europe, but still featured in a report carried out by Wenger and released last week.

FIFA president Gianni Infantino said at the end of March that he was open to any ideas for the post-2024 football calendar and earlier this month promising “interesting discussions” on Wenger’s proposals.

A biennial World Cup is tempting for broadcasters but would be fiercely opposed be federations, leagues and clubs who fear player burnout.

“Maybe we should ask UEFA and FIFA to extend the year. Maybe we could have 400 days a year,” said Manchester City manager Pep Guardiola last month.

A World Cup every two years would also spell the end of friendly matches, lead to a reorganisation of qualifying structures and require clubs to release their internationals every summer.

The year of 2024 also coincides with the introduction of a new format for the UEFA Champions League, providing for 100 additional matches.

Clubs risk their players picking up more injuries with such a dense calendar, while the economic benefits are also uncertain, according to Raffaele Poli, head of the CIES Football Observatory.

“One should be aware of the risk of making a product less prestigious by making it less rare,” Poli told AFP.

Poli also warned that a proliferation of international tournaments would eat away at the value of broadcast rights for both domestic championships and continental club competitions.

“Let me be very clear: the starting point is not ‘the calendar is full and so nothing changes’,” Infantino told the Congress.

“The starting point is the exact opposite of that. We have a blank sheet, we are open to take on board all views and opinions about how we can make the international calendar better.”

Infantino reiterated his intention to “find a date” for a Club World Cup which he wants to see extended to 24 teams, despite widespread opposition to the plan.

However, he argued at length Friday for FIFA to play a key role in rewriting the calendar.

He said the organisation is the “only body” that “generates” and “redistributes” its revenues “around the world” unlike continental confederations and leagues.

“Let me explain,” he added Friday.

“Today, big leagues generate billions in revenues from all over the world – and these revenues are distributed where? To the 18-20 clubs in their leagues, with a small percentage going in solidarity.”