Ferry disaster kills 28 in Bangladesh; search for survivors called off 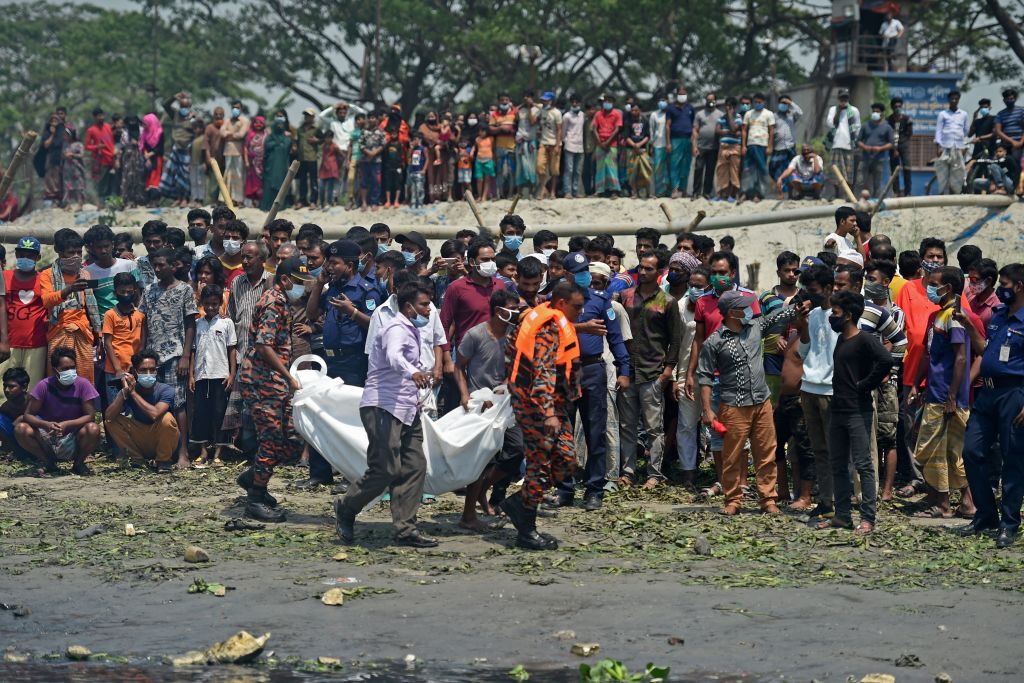 Firefighters carry a dead body after recovering from the capsized boat in Shitalakshya River, in Narayanganj on April 5, 2021. (Photo by MUNIR UZ ZAMAN/AFP via Getty Images)

THE search for survivors from a ferry disaster in Bangladesh was called off on Monday (5), officials said, with the death toll rising to 28 when rescuers pulled the vessel from the water and found bodies inside.

The one-and-a-half storey ferry was lifted from the heavily polluted Shitalakshya River in the central district of Narayanganj on Monday, some 18 hours after it sank following a collision with a bigger cargo vessel on Sunday (4).

Six children were among the dead, he added.

The vessel, named Sabit Al Hasan, sank less than an hour after it had departed Narayanganj, 20 kilometres (12 miles) from the capital Dhaka, officials told AFP.

A local police inspector said the ferry was packed with passengers after the government confirmed it would impose a seven-day lockdown across the country to combat the recent rise in coronavirus cases.

Billah said the ship was carrying at least 46 people when it left.

“Some 20 people swam to safety after the vessel sank,” he said.

He said search operations, which were led by fire brigade divers and other rescuers, were called off Monday evening as authorities believed no one else was missing.

Hundreds of onlookers and relatives of the missing had watched from the shore, but many have since left, he said.

“I don’t think anyone is missing as most of the relatives have left the riverbanks,” Billah said, adding that authorities had ordered a probe into the accident.

Local police chief Dipak Saha said rescue efforts on Sunday had been hampered for hours by a powerful storm that hit after the accident.

Ferry accidents are common in Bangladesh, a delta nation crisscrossed by hundreds of rivers.

Millions of people are heavily reliant on ferries for transport, particularly in the country’s southern coastal region, but the vessels have a poor safety record.

Experts blame poor maintenance, lax safety standards at shipyards and overcrowding for many of the accidents.

In June last year, a ferry sank in Dhaka after it was hit from behind by another ferry, killing at least 32 people.

In February 2015, at least 78 people died when an overcrowded ship collided with a cargo boat in a central Bangladesh river.

The number of accidents has dropped sharply in recent years as authorities crack down on unseaworthy vessels.