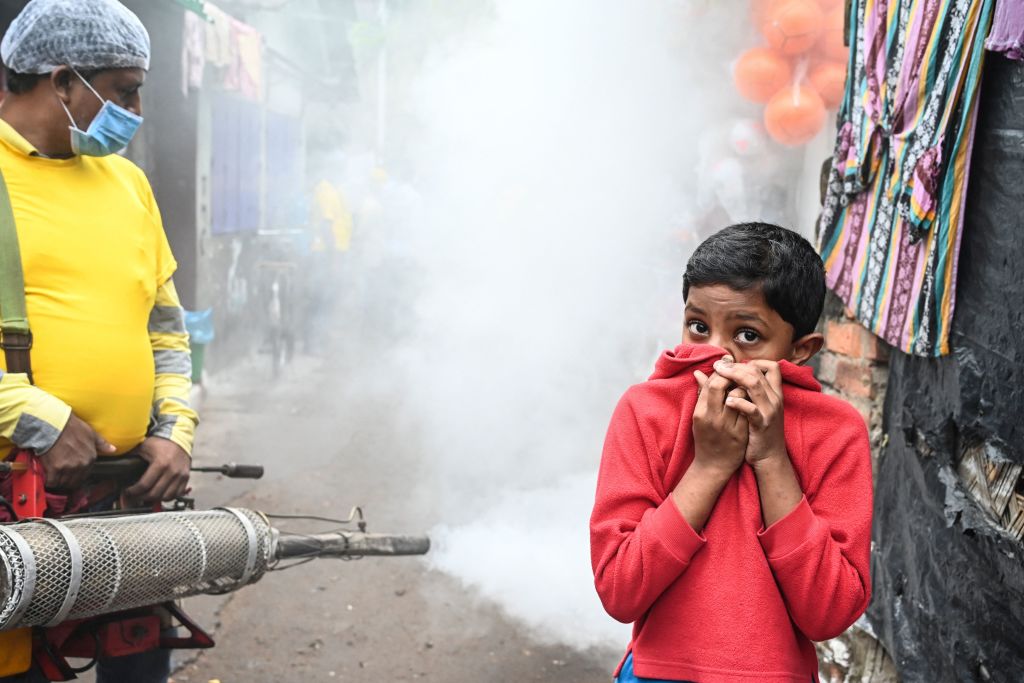 A child covers his face while a municipal worker fumigates a slum area as a preventive measure against mosquito-born diseases in Kolkata on November 15, 2021. (Photo by DIBYANGSHU SARKAR/AFP via Getty Images)

THOUSANDS of people in India’s capital and hundreds of thousands across the nation are currently battling dengue fever, The Telegraph reported.

As a result, beds hastily converted for Covid-19 earlier this year are now being repurposed for dengue, the report added.

In India’s ongoing outbreak, which first erupted in late August in Firozabad, Uttar Pradesh, 88 children died. As the disease has spread across the country, there have been 116,991 cases nationally.

While dengue is usually a flu-like illness, severe dengue can cause serious bleeding and death. There are four strains of dengue fever, which is spread by mosquitoes, with varying degrees of mortality.

Dr Vikas Singhal, joint director of Uttar Pradesh’s vector borne disease unit, confirmed that the most virulent DENV-2 strain was behind 85 per cent of the cases in Firozabad.

However, he told The Telegraph that he could only confirm eight dengue deaths, while an audit into the other deaths is ongoing.

Uttar Pradesh has reported 23,128 cases of dengue this year, its highest toll since 2016. However, several officials said they suspect Uttar Pradesh is underreporting its cases due to limited testing and poor surveillance.

Cases have continued to rise across India as monsoon has lashed the country for an extended period, providing good breeding grounds for the mosquitoes in pools of standing water.

Patients from north Indian states have started pouring into Delhi, which has seen a major spike in cases in recent weeks. In total, it has logged 5,270 cases, the highest since 2015, with hospitals flooded by dengue patients.

Dr Ritu Saxena, chief casualty medical officer (CCMO) at the LNJP hospital, told The Telegraph: “At any given point of time, we have around 100 dengue patients admitted with us. To deal with it, we are utilizing the Covid beds for dengue patients.”

According to her, about 20 per cent of the admitted patients were in a serious condition and 10 per cent need intensive care unit support.

One municipal hospital in east Delhi, Swami Dayanand (SD), had to cancel elective and emergency surgeries after failing to cope up with the rush of dengue patients.

“We are getting nearly 250-300 fever cases each day. Out of them, 70 to 80 per cent are dengue patients and all our wards are full,” Dr Rajni Khandelwal, medical superintendent of the SD hospital, was quoted as saying by the newspaper.

Rural health centres in Punjab are reporting a shortage of medicines and paracetamol, and the dengue mosquito was found in 35,000 or the 1.5 million homes inspected by authorities, officials said.

“Unfortunately, dengue has sent a repeated alarm bell which the Indian health system has never looked into. There has been a lack of investment, thought and accountability in the public health system in India,” Dr Sumit Ray, medical superintendent of the Holy Family hospital in New Delhi, told The Telegraph.

“If we have a surge like the second Covid wave, most of the Indian states including New Delhi will be overwhelmed because we are not prepared for it. There are areas in the country which are organized better and we should look at examples within the country and abroad to see how we can do better.”