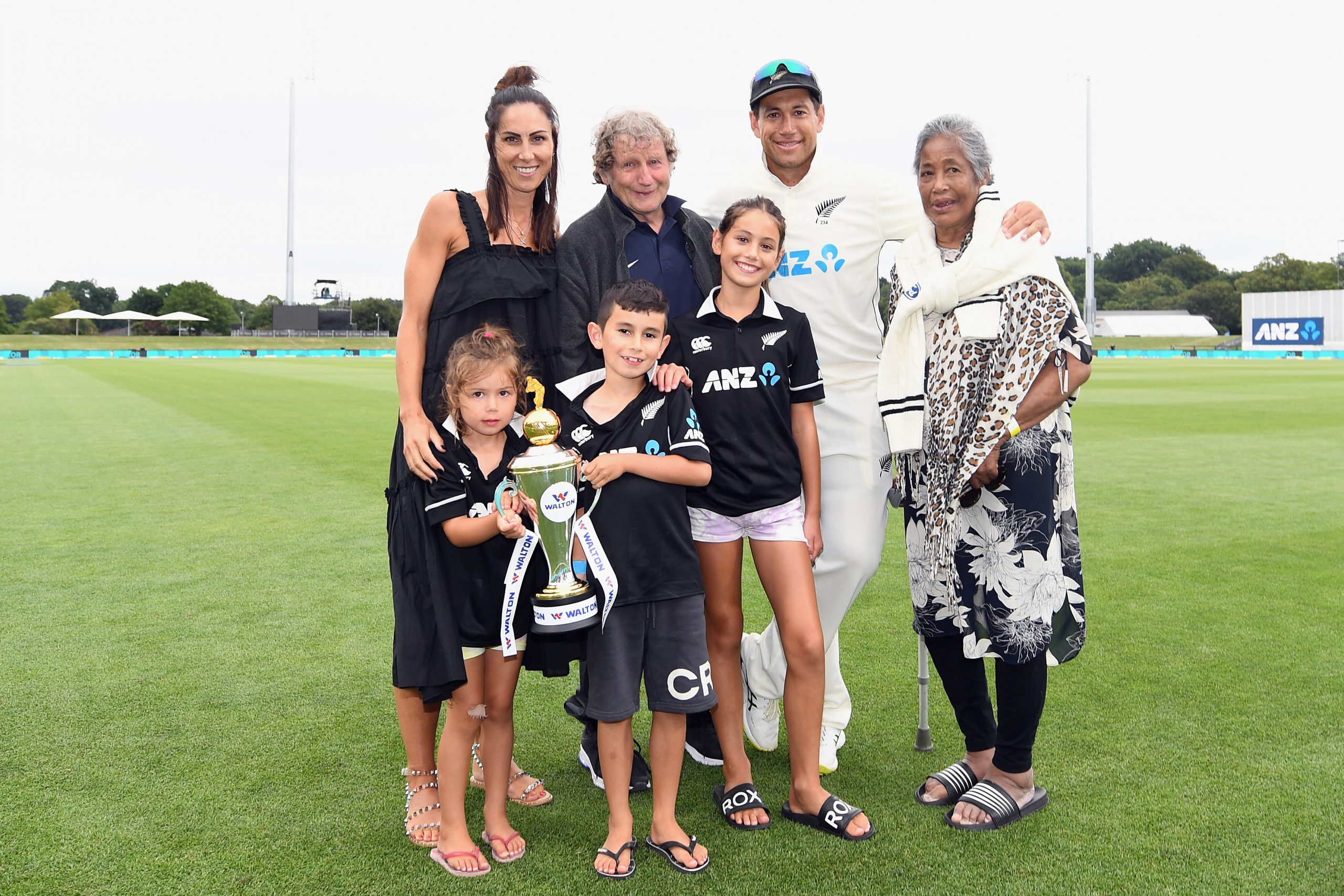 Ross Taylor of New Zealand poses with his family after playing his final Test during day three of the Second Test match in the series between New Zealand and Bangladesh at Hagley Oval on January 11, 2022 in Christchurch, New Zealand. (Photo by Kai Schwoerer/Getty Images)

New Zealand wrapped up the second Test against Bangladesh by an innings and 117 runs in Christchurch on Tuesday to draw the series, with veteran batsman Ross Taylor taking the final wicket in a fairytale finish to his Test career.

Bangladesh, forced to follow on 385 runs behind, were dismissed in their second innings for 278 after Liton Das had cracked a gallant 102 off 111 deliveries.

But the day belonged to 37-year-old Taylor, New Zealand’s elder statesman playing his 112th and final Test, who had a rare bowl with his part-time offspin at the end and needed just three balls to take the last wicket of Ebadot Hossain, caught by Tom Latham for four.

It was a fitting farewell for Taylor, who bowed out of red-ball cricket with a New Zealand record 7,683 runs, putting him 37th in the all-time list of the sport’s most prolific run-getters.

“I wanted to finish with a win and the guys definitely gave that to me,” Taylor said.

“The way we came out and bowled and put them under pressure after putting up a very good total put us in good stead. It was an emotional game for me, my family and friends and it was good to get the win.”

“After losing the toss and getting put in, to get a significant score on the board and then for the bowlers to do their thing on a wicket that was flattening out was outstanding.”

The Bangladesh top order put up gritty resistance in reaching 123 for three, while Liton shared a century partnership for the sixth wicket with Nurul Hasan.

But there was no fight in the tail as New Zealand, the reigning world Test champions, completed a much-needed win after being comprehensively beaten by eight wickets in the first Test.

– ‘Big achievement’ –
Rather than be disappointed in the result, Bangladesh captain Mominul Haque said winning one Test and sharing the two-match series was “a very big achievement for us”.

“So we have to take this challenge and continue our momentum,” he added.

Bangladesh were sunk in their second innings by the bounce of Neil Wagner, who took three for 77, while Kyle Jamieson finished with four for 82.

But the foundations for New Zealand’s victory were laid by captain Latham with his epic 252 setting up a mammoth first innings 521 for six declared.

The Bangladesh bowlers failed to capitalise on the green wicket after winning the toss and asking New Zealand to bat.

When Bangladesh batted, the hosts’ pace bowlers showed how to use the conditions, skittling the tourists for 126 with Trent Boult taking five for 43 and Tim Southee three for 28.

When Bangladesh were sent in again, New Zealand produced the third weapon in their bowling armoury, short-ball specialist Wagner.

After Jamieson removed Shadman Islam (21), Wagner entered the action with a short ball to Najmul Hossain Shanto (29) that was hooked to Boult on the fine-leg boundary.

Debutant Mohammad Naim made a cautious 24 off 98 balls before he fell to Southee and then Wagner was back in the action.

Skipper Mominul Haque had reached 37 when Wagner switched to a full delivery which was edged to Taylor at first slip.

Yasir Ali, who scored 55 in the first innings, was on two when he fended at a rising Wagner delivery and the ball lobbed to Latham at second slip.

Jamieson, who struggled with his line in the losing Test, won by Bangladesh by eight wickets, was much sharper in Christchurch, removing Mehidy Hasan and Liton to go with the wicket of Shadman.