EXCLUSIVE: “May 6th is the most important election in London’s history,” says Sadiq Khan 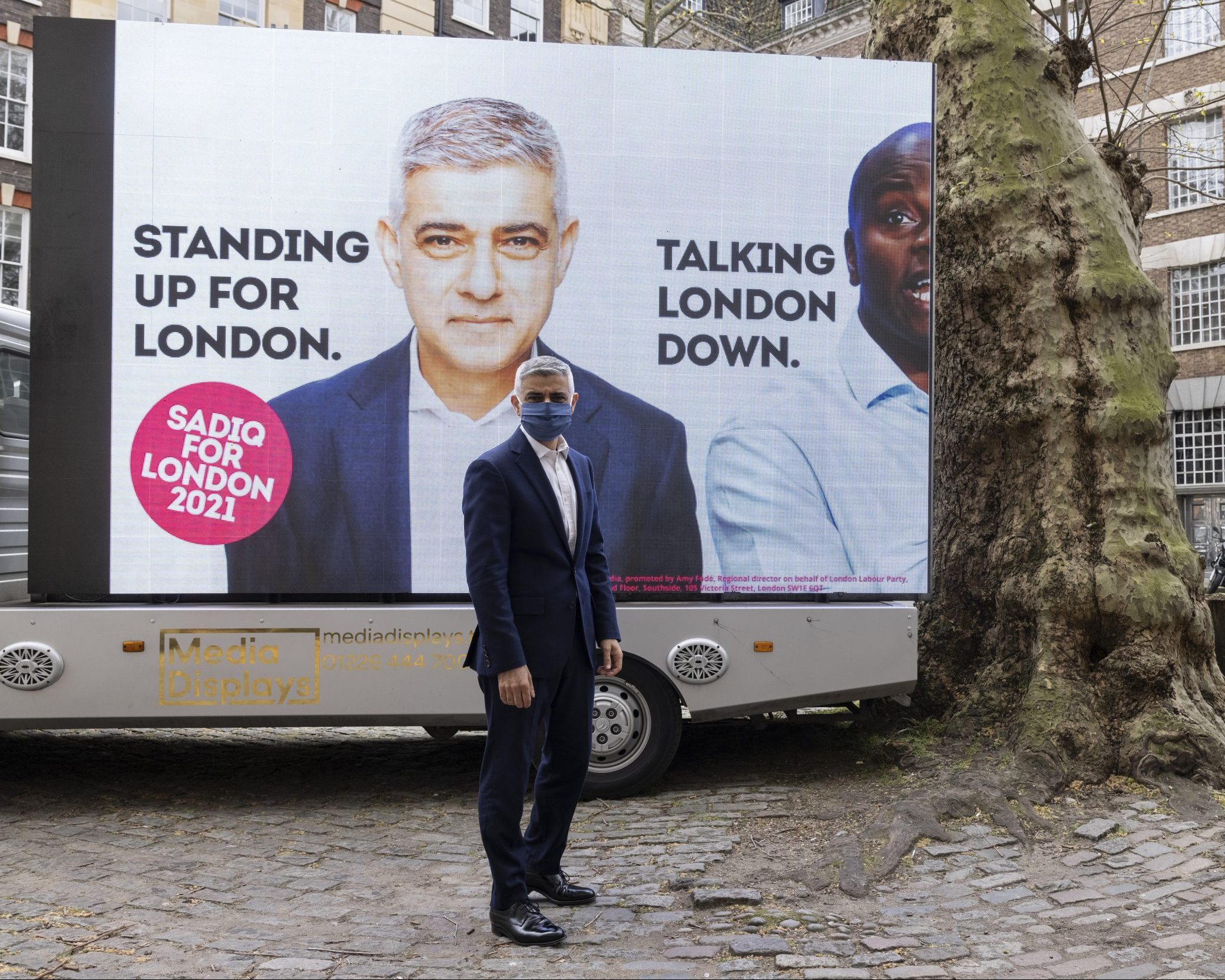 LONDON, ENGLAND – APRIL 15: Labour’s Mayor of London Sadiq Khan, is joined by Deputy Leader of the Labour party Angela Rayner as he unveils his campaign advert ahead the London Mayoral elections, on April 15, 2021 in London, England. Mr Kahn is campaigning to be re-elected for a second term as London Mayor on May 6. (Photo by Dan Kitwood/Getty Images)
Follow Us

London mayor, Sadiq Khan, said his past year had been filled with “anger, frustration and pride” as he fought to tackle the global pandemic and keep Londoners safe.

He was speaking at an “In Conversation” event organised by the Asian Media Group and Eastern Eye.

Over one hour the Labour candidate for mayor spoke about his vision should he be re-elected, and he also answered questions on the pandemic, recovery plans, congestion charge, crime and racism.

“I genuinely think, on 6 May we face the most important election in London’s history.

“We face challenges because of Brexit and the consequences of this awful pandemic. Over last year, more than 18,000 Londoners have lost their lives across the country, and 30,000 in London alone.

“More than 300,000 Londoners have lost their jobs, and more than a million are currently furloughed.

“The furlough schemes end in September, and there’s a real possibility that those who were furloughed, could be made redundant,” Khan told Barnie Choudhury.

“So, if I re-elected as mayor, my focus will be jobs, and making sure City Hall does what they can to protect those who are currently working to support the creation of new jobs.

“We will also help those who lose their jobs to get back into work as soon as possible.”

Khan pointed out that his administration announced measures worth more than £544 million to set up skill development academies in the green, creative, digital, health and social care sectors supporting Londoners to get the skills they need for future proof jobs.

“We set aside £6m to encourage people from the west and across the country for people to come to London safely throughout the summer.

“I am the son of immigrants, son of a bus driver and became the mayor of the greatest city in the world.

“You’ve seen me celebrate with you, irrespective of religion. I always stood for you and I believe diversity is not a weakness, but it’s a strength.

“I’m asking all of those who live in London, who have progressive, liberal and green values to vote for me and make no mistakes. So, I can build the foundation we’ve laid in the first five years,” Khan said.

“Why? Because of the London promise, I call them a promise. You work hard, you got a helping hand, you can achieve anything. That’s the story of my dad, and I want to give something back. I want to be that helping hand. Help Londoners have their potential fulfilled.”

While mentioning the mayor job as a 24-7 job, Khan said that he loved the difference he has been able to make over the first five years, and want to carry on ‘being a mirror’ of the greatest city in the world.

The mayor expressed hope that sporting events such as Euro 2020 and tour of Pakistan and New Zealand cricket teams combined with cultural events will give London rapid recovery this summer.

He reaffirmed his campaign promise to bring the Indian Premier League (IPL) to London during the interview.

While mentioning the Covid situation in India, Khan said that they are lobbying with the UK government to assist India, whichever way possible.

“We know the troubles that the people of India are going through while dealing with this virus. I’m sure all of us are showing solidarity with our brothers and sisters in India.

“And we’ll do what we can to support them during these difficult times the virus spreads incredibly quickly, in a very densely populated country.”

“Several emotions over the last 14 months. Anger, frustration, heartbreak, pride all those things. I think one of the lessons of this pandemic is going to be centralised democracies isn’t good for responding to crisis.

“When I speak to mayors across the country from Manchester to Liverpool to Birmingham, we think we could have helped the government more had they asked us and let us help them with the health consequences of the pandemic, but the economic consequences as well. Heartbreaking, because many of these deaths were preventable and indeed could not have happened had the government done the right things around personal protection during Covid, test tracing, making sure they follow the advice of experts, had they locked down earlier, listen to the advice of Sage, not doing so many U-turns.

He said that prime minister Boris Johnson, at the moment, is concerned about his legacy.

“The government was falling asleep. It should have realised that the health of individuals is interlinked with the health of the economy, and the government’s failure to follow the advice of, for example, sage, was quite expensive. So, when there’ll be a public inquiry, I will be more than happy to give evidence to that.”

However, he hoped that there will not be another lockdown as long as we continue to progress with the vaccine roll out, but also test trace and also support for those have to have to isolate.

Sadiq Khan said that the government has forced him to reintroduce the congestion charge to £15, which was suspended during the early periods of the pandemic, when it pumped money into London’s transport authority, TfL.

“When the pandemic began in March, what I did was I lifted congestion charges. From March till June there was no congestion charge, that was my decision. No passengers were using TfL because of the pandemic London did the right thing and stayed at home. Like every other transport authority in the world, we wanted the government to step in and help. The government in June said we will support it but said there are some conditions. You must reintroduce the congestion charge, widen the scope and increase the level. As there was no option I accepted those.

When asked about the crime rates in London, Kahn said that he had invested in police and recruited 1,000 more people into the force and also on young people. He said that he was the first mayor in London who invested more than a billion pound in police, and because of this crime rates have gone down in the city.

The mayor was vocal about the service of community pharmacies and pharmacists during the pandemic and urged the government to support them by truly addressing their requirement.

When asked about racism, he said that he doesn’t want to elaborate on the abuses he faced during his tenure as it may discourage others to enter politics.

He also expressed his concerns about the mental health of children during the pandemic and lockdown.