Everyone thought she was pregnant. It turned out to be a 10.5 pound ovarian cyst!

She said one physician even suggested that the pain she was experiencing during sex was “due to the size” of her partner. 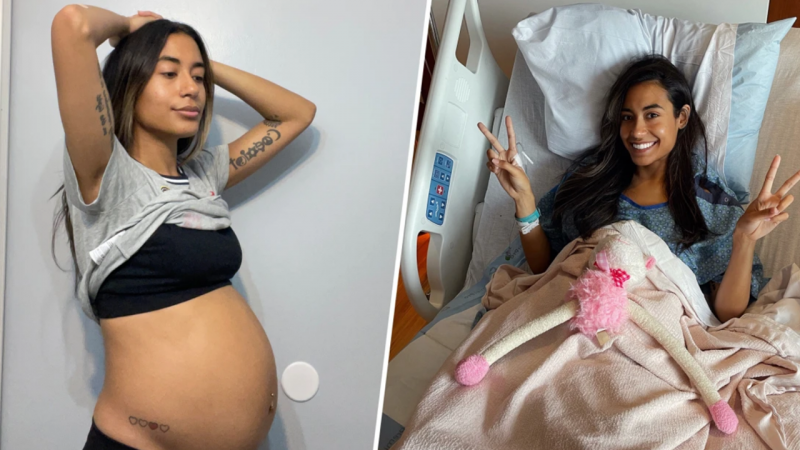 A preschool teacher, Raquel Rodriguez, 25, from Minnesota who was being congratulated for her pregnancy, recently had to go under the knife to remove a 10.5-pound cyst from her ovary.

Explaining when the cyst became quite large, she told TODAY: “I looked and felt pregnant. She is quoted as saying, “People were asking me, ‘when are you due?’ I had friends saying, ‘I didn’t know you were pregnant! Why didn’t you tell me?’”

Raquel had supposedly visited doctors five years ago about the cyst but “they weren’t worried about it and sent me home,” she said.

At the time the scans showed that the cyst was around 8cm wide – almost the size of a softball. Raquel was also experiencing sudden pain and is reported to have been experiencing kidney infections and recurrent urinary tract infections.

According to Dr Taraneh Shirazian, director of the Center for Fibroid Care at NYU Langone Health in New York City, it was a mistake on the part of the doctors to not pay much attention to the matter.

He reportedly told Today, “Mucinous cysts don’t resolve themselves like common cysts which typically come and go with a woman’s menstrual cycle.

“Once they get to about five centimeters or more, we become worried about them cutting off the blood supply to the ovary. You worry about complications. Typically, you want to remove it when it gets to around five centimeters.”

Raquel supposedly visited nine doctors over a span of five years and each doctor she visited, didn’t think the cyst was anything to worry about.

She says, one physician even suggested that the pain she was experiencing during sex was “due to the size” of her partner.

Explaining the doctors’ reactions to her condition Raquel told Today, “I think maybe if I had been more aggressive about pain I was having, they would have listened more?

Dr Shirazian added that mucinous cysts are especially uncomfortable because they are filled with a “thick, mucus-like fluid.” Raquel’s cyst contained 1.1 gallons of fluid.

According to Dr Shirazian, 80% of mucinous cysts are benign, 10% are borderline and 10% are malignant.

Ovarian cysts are when a fluid-filled sac forms on the side of the ovaries often during ovulation when an egg is released.

Last year, Raquel’s cyst began to grow at such an alarming rate, that she started to look pregnant. I had friends saying, “I didn’t know you were pregnant! Why didn’t you tell me?” she said.

Speaking about her ordeal, she told the Daily Star, “I laugh now but it’s not really funny. My hair was falling out, I was in a ton of pain and I was losing weight without trying.”

A month ago, Raquel underwent a two-hour surgery to remove the cyst which is reported to have grown to 28cm and contained a gallon of fluid.

While Raquel’s right ovary and fallopian tube (where the cyst was growing) are now removed – her left ovary is left intact. She has now fully recovered.

According to information posted on the NHS, an ovarian cyst is very common. It’s a fluid-filled sac that grows on the ovaries. Also, most cysts that occur on the ovaries are known to disappear without any treatment.

A woman can experience symptoms of having an ovarian cyst only when it blocks the blood supply to the ovaries, is very large, or if it splits. Ovarian cysts can also sometimes be caused by an underlying condition like endometriosis.

Signs to look out for:

Pelvic pain – either dull, severe, sharp pain, or a feeling of heaviness

A feeling of fullness even if you’ve eaten very little

A need to urinate frequently

Heavy, irregular periods or periods that are lighter than normal