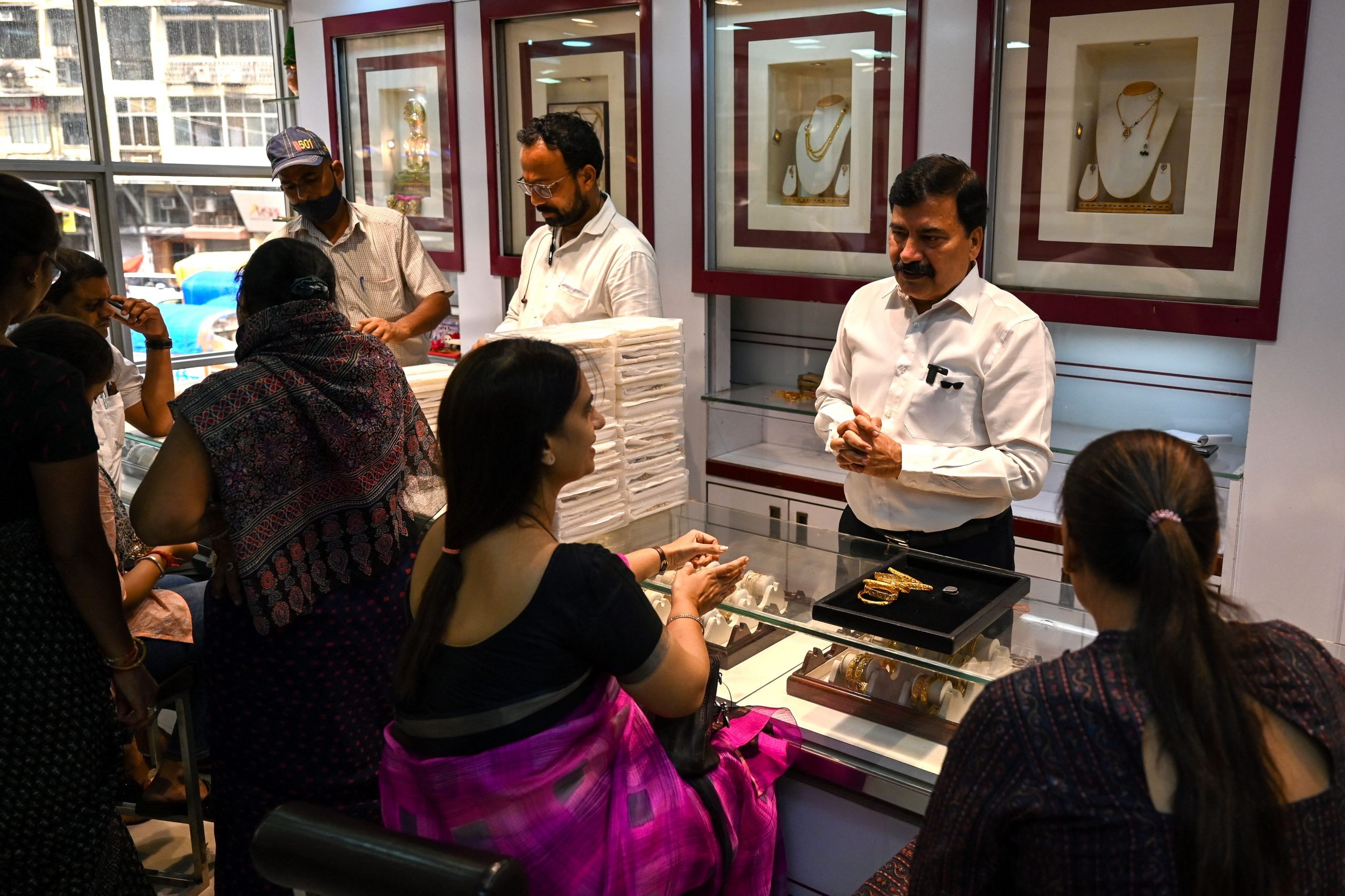 (Photo by PUNIT PARANJPE/AFP via Getty Images)
Follow Us

In Mumbai’s jewellery bazaar, Kavita Jogani gingerly places her wedding bangles on the shopkeeper’s scales, one of the thousands of Indians parting with their most cherished asset — gold.

It was not an easy decision — Jogani was desperate after her garment business took a severe hit in the past year and a half with multiple coronavirus lockdowns, making it difficult to pay shop bills and the salaries of her 15 employees.

The headline growth numbers suggest Asia’s third-largest economy is rebounding from the economic crisis unleashed by Covid-19, but there is no end yet to the financial pain for many Indians.

“I don’t have any other option than selling the gold,” said Jogani as she waited nervously for the shop owner to make her an offer.

“I bought these bangles before my wedding 23 years ago,” the 45-year-old told AFP.

Business closures and job losses pushed more than 230 million Indians into poverty in the past year, according to a study by Azim Premji University, leaving many struggling to pay rent, school fees and hospital bills.

Their difficulties have been compounded in recent weeks by soaring prices for electricity, fuel and other items.

Desperate for cash, many families and small businesses have been putting up gold jewellery — their last resort — as collateral to secure short-term loans to tide them over.

And many of these loans have gone sour with borrowers unable to keep up with repayments, leaving lenders to auction off the gold.

Newspapers have been flooded with notices for such sales.

Gold has immense financial and cultural significance in India — it is considered essential at weddings, birthdays and religious ceremonies, and also seen as a safe asset that can be transferred from one generation to the next.

Indians bought 315.9 tonnes of gold-use jewellery in 2020, almost as much as the Americas, Europe and the Middle East combined, according to the World Gold Council. Only China bought more.

Indian households are estimated to be sitting on 24,000 tons — worth $1.5 trillion — in coins, bars and jewellery.

“It is the only social security for the woman or any household because there is no such social security programme from the government,” said Dinesh Jain, director at the All India Gem and Jewellery Domestic Council.

“Gold is like liquid cash,” he told AFP. “You encash it in at any time of the day and night.”

Kumar Jain, 63, whose family has run a shop in Mumbai’s historic Zaveri Bazaar for 106 years, says he has never seen so many people coming to sell.

“It wasn’t like this before the pandemic,” he told AFP.

“The worst part is when they sell their ‘mangalsutra’,” he said.

That necklace “is a sign of a married woman. You start crying when she takes off the ‘mangalsutra’ from her neck and says, ‘Give me money for this’. That’s the worst scenario.”

Jogani, the garment business owner in Mumbai, was able to find some breathing space by selling some of her jewellery.

“Earlier, I would neglect these things when my mother used to tell me that ‘you have to save in gold’,” Jogani said.

“But now I… know. Everyone should save in gold.”