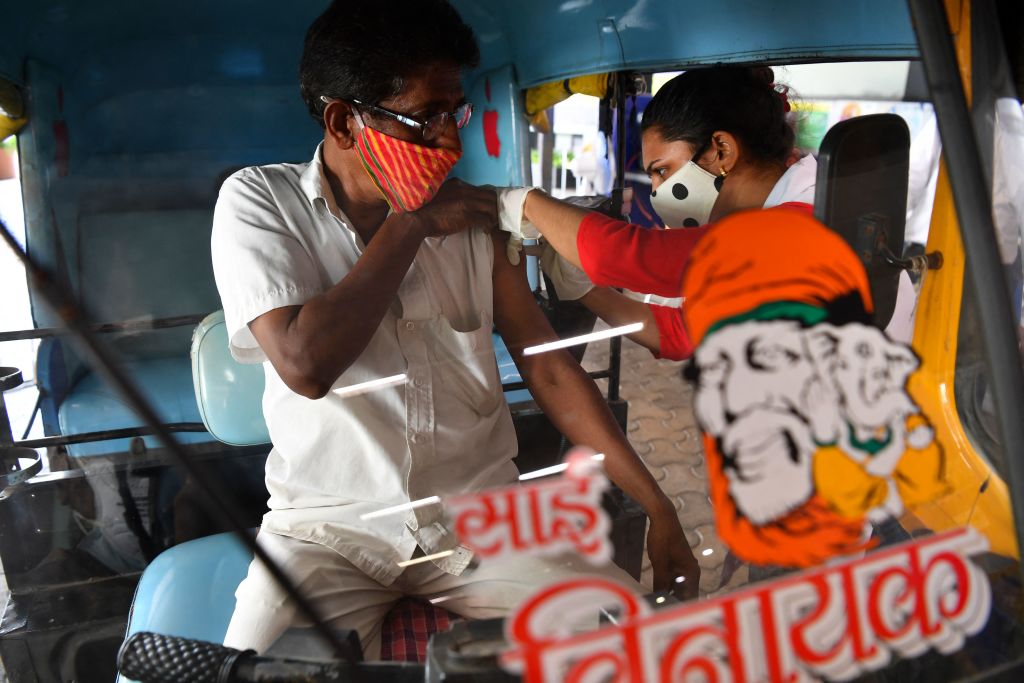 A health worker inoculates a auto-rickshaw driver with a dose of a Covid vaccine at a drive-through vaccination centre in Mumbai. (Photo by INDRANIL MUKHERJEE/AFP via Getty Images)
Follow Us

INDIA’s richest state on Friday (25) ordered malls and cinema halls to close as it scrambles to control a more transmissible variant of the coronavirus that has scuppered plans to ease lockdown measures.

At least 20 cases in Maharashtra state have been found linked to the new Delta Plus variant that India designated a variant of concern on Tuesday (22), according to the health ministry.

While it is not known where the variant originated, Public Health England first reported on Delta Plus in a June 11 bulletin, calling it a sub-lineage of the Delta variant first detected in India last year.

The Delta variant was partly responsible for a ferocious second wave in India that triggered a flood of cases and overwhelmed the health system.

Scientists fear Delta Plus could trigger another wave of infections as India recovers from the second wave. Many states, including Maharashtra, have been easing lockdown rules imposed in April.

“Positivity rate and daily infections were going down consistently until a week ago, but in some regions again cases have started to rise,” said a senior government official in Maharashtra.

“We don’t know whether this is due to easing restrictions or the new variant, but this is a concern.”

At least 11 other countries have reported cases of Delta Plus.

New variants are a concern in India, where more than half the population is still not vaccinated. Only about 5.6 per cent of India’s adult population of 950 million has received two doses.

The country has reported 48 cases of Delta Plus, and studies are ongoing to test the effectiveness of existing vaccines against the variant.

“We should have the results in about 7 to 10 days time whether the vaccine is working against the Delta Plus,” said Balram Bhargava, head of the Indian Council of Medical Research.

In Maharashtra, a state of around 126 million people, only around 30 million have received the first dose.

“If citizens start doing business and crowding places without following guidelines, then infections may increase … local authorities should not open businesses in a hurry,” the state’s Chief Minister Uddhav Thackeray said.