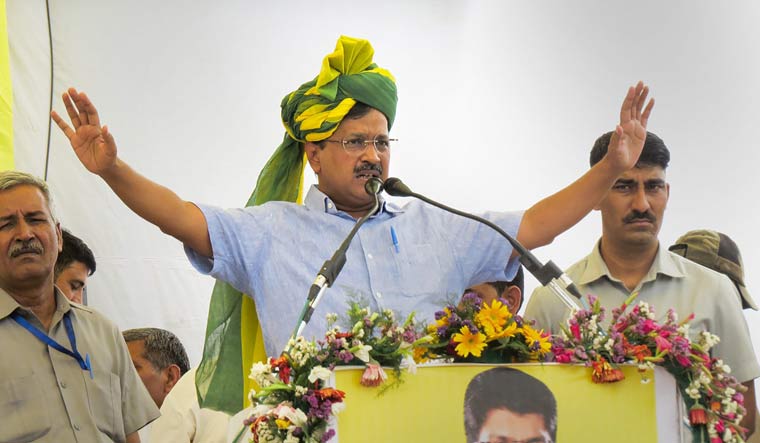 He has been smeared with chilli powder and slapped, but Delhi’s chief minister will still be leading the fight against prime minister Narendra Modi in Sunday’s penultimate round of the Indian election.

Fifty-nine seats are up for grabs across the country on the sixth voting day of the marathon ballot.

The tussle for the capital will be front and centre, with all eyes on its chief minister Arvind Kejriwal, whose Aam Aadmi Party (AAP) — or Common Man party — was formed just seven years ago amid outrage over corruption.

It has since taken control of Delhi’s regional government and is fighting to add to its four seats in India’s lower house of parliament.

Modi’s right-wing Bharatiya Janata Party (BJP) will be trying to stave off the onslaught and keep the seven seats it currently holds.

Kejriwal, a tax commissioner-turned-campaigner, has suffered more than most in India’s notoriously rough and tumble political bullring.

Since 2013 and his first term as Delhi chief minister, the 50-year-old has been the target of at least seven attacks.

Ink has been thrown at him twice, with eggs also hurled on one of those occasions. In 2016, a shoe was thrown while Kejriwal made an announcement, a rickshaw driver hit him and his car was attacked by a mob with iron rods.

In November a man smeared chili powder on his face inside the Delhi government building. His latest brush with danger was last week when a man mounted the open top car Kejriwal was campaigning in and slapped him.

Modi’s party questioned whether the chief minister organised it all himself.

Kejriwal, whose party has 67 of 70 state assembly seats, said in recent interviews that one month ago he thought his party faced a “tough fight” in Delhi but now he hopes to take all seven parliament seats.

“Our only aim is to stop Modi and BJP president Amit Shah from coming back to power. We will support anyone other than that duo,” he told Press Trust of India news agency.

-Creating anarchy-
With the opposition Congress party also in the contest, the anti-BJP vote could be divided. Still, the ruling party faces an increasingly tough battle in the election, observers say.

The BJP won 282 seats in 2014 but some analysts predict it will suffer major losses when the final results are announced on May 23.

Congress won 44 seats in that election, an historic low since independence in 1947.

The AAP is also looking for a major boost and Modi has stepped up verbal attacks on Kejriwal in recent rallies, accusing him of “creating anarchy” in the capital.

Voting will be held in seven states on Sunday. West Bengal is drafting in tens of thousands of extra security forces to prevent a repeat of violence during earlier rounds of voting.

At least one of the state’s constituencies is in an area prone to attacks by Maoist rebels.

Scandal has also swirled, with West Bengal police detaining a BJP activist after sending a Facebook post with the head of state chief minister Mamata Banerjee superimposed on an actress wearing a see-through dress.

The BJP and Banerjee’s Trinamool Congress party are in a fierce struggle for votes in the state.

The seventh and final round of voting is on May 19 with the count to be held four days later.