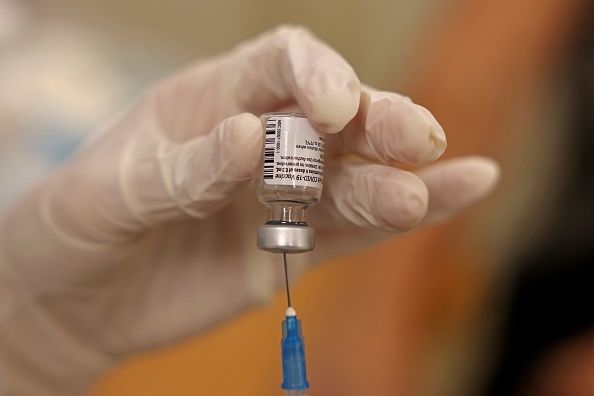 (Photo by MENAHEM KAHANA/AFP via Getty Images)
Follow Us

BRITAIN is set to offer Covid vaccine booster dose to more than 32 million Britons from early next month, as per a report on Sunday (1).

The Covid booster dose campaign is expected to start as soon as Sept 6 to ensure that the rollout is completed by early December, if it goes to plan, the report added.

About 2,000 pharmacies reportedly will be at the forefront of the booster vaccine programme so that doctors and NHS staff can focus on the growing backlog of patients awaiting other treatments.

Ministers are planning to deliver an average of almost 2.5m booster doses a week to adults aged 50 and over and immunosuppressed patients of all ages amid fears that the efficacy of the vaccines may begin to decline, the Daily Telegraph reported

Proposals have been drawn up for the Covid-19 vaccine to be co-administered alongside the flu jab, with one injection in each arm mooted. The booster jab campaign aims to protect the most vulnerable ahead of winter from any other variants of concern.

“That is the plan, wherever possible,” the outlet quoted a government source who also stressed it “depends on final JCVI [Joint Committee on Vaccination and Immunisation] advice and coronavirus vaccine booster trials”.

Plans are being made to give people a different booster jab to the shot they received for their first and second dose, after early trials suggested that mixing vaccines could provoke an enhanced immune response, reports said

As per government figures, about 85 million doses of Covid vaccine have been administered so far, with 88 per cent of adults have received their first shot while 72 per cent of Britons are now double-jabbed.

The booster drive will see the number of pharmacies involved tripling from around 650, a move that has been welcomed by  pharmacy industry.

Nikki Kanani, the NHS England medical director for primary care, had reportedly unveiled a streamlined application process last month to allow more pharmacies to sign up to hand out the jab.

A Department of Health and Social Care spokesman said the booster programme will be “informed by the JCVI’s final advice”, with details of the rollout confirmed “in due course”, report said.

Starting a few days ago, Israel became the first country to offer a third dose of Covid vaccine to its citizens on a wide scale. It said it is offering the third booster dose of the Pfizer vaccine to over-60s in an effort to keep the delta variant at bay.

The Japanese government is also considering to offer a third booster shot to those fully vaccinated against Covid-19 shot next year amid concerns over newer variants that are more contagious than previous ones, reports said. The minister in charge of vaccine rollout, Taro Kono, said in a television program aired on Sunday (1) that a third dose will be recommended next year.

Meanwhile, Pfizer and Moderna have raised the prices of their Covid-19 vaccines in their latest European Union supply contracts, reports said on Sunday (1). The new price for the Pfizer shot is £ 16.65 against £ 13.23  previously, media reports said, citing portions of the contracts seen.