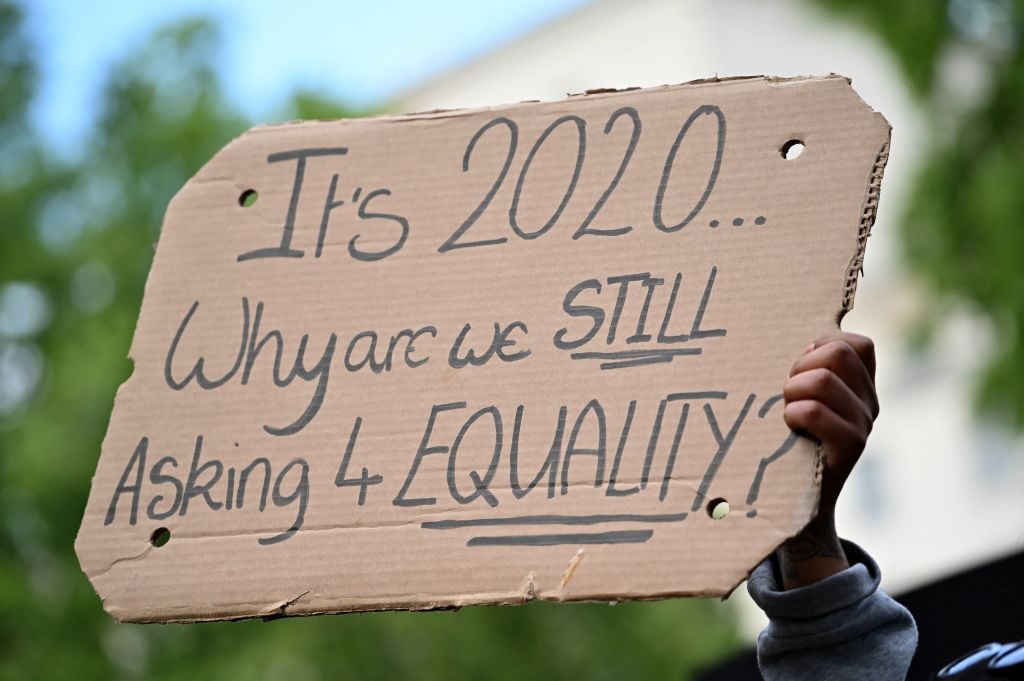 The current anti-racism protests, on both sides of the Atlantic, show that mobilising those who feel most strongly about the issue can create pressure for change – pressing governments and employers to act to tackle barriers to equal opportunity (Photo: JUSTIN TALLIS/AFP via Getty Images).

HOW do we defeat racism? What makes change happen? There is no single ‘silver bullet’ answer. Tackling discrimination requires institutional change, but reducing prejudice is about social attitudes too. Different audiences matter for these different goals.

The current anti-racism protests, on both sides of the Atlantic, show that mobilising those who feel most strongly about the issue can create pressure for change – pressing governments and employers to act to tackle barriers to equal opportunity.

Anti-prejudice work must change minds too. Shifting social norms over time is only possible by reaching beyond the already converted. That gets more difficult. Those most motivated to campaign against prejudice need to engage with people who do not already talk or think like they do – and achieve something constructive, rather than to see all sides dig deeper trenches.

Contact matters. A new Pew research report on attitudes towards diversity across countries is the latest study to underline this. Studying 11 emerging economies, there were different views about diver­sity. India emerged overall as the most positive country of those studied in attitudes to diversity, with 65 per cent seeing it as positive and 15 per cent as negative for the country. By contrast, only one in five people in Mexico saw diversity as positive, with a majority indifferent to it.

‘In most countries surveyed, people who interact more with those who are different from them – whether religiously, ethnically or racially – tended to be more positive toward societal diversity,’ the researchers found.

Two-thirds reported such contact in India, while only a third did so in Mexico. Members of minority groups were often more likely to report contact outside of their group. In India, the Pew survey found that 70 per cent of Muslims reported they had regular contact with Hindus, while just over half of Hindus (56 per cent) had regular contact with Muslims. But Hindus who interacted regularly across faith lines were 15 per cent more likely to hold positive views of Muslims.

The research took place ahead of the controver­sial new citizenship law and illuminates some of the faultlines between ideas of identity and citizenship.

Not all contact is positive. Indeed, a single bad experience can lead us to confirm stereotypes. Those with more positive views of difference may seek out more contact too. But a wealth of aca­demic literature shows that people talk differently about a group once they have forged some mean­ingful contact with somebody from it.

When British Future has asked people what made positive difference in reducing prejudice in this country, we have found a strong consensus –across ethnic groups – that contact in classrooms and more mixing in schools has made the most difference. But we cannot only focus anti-prejudice efforts on the classroom. It would make more sense to think more about what happens beyond the school gate. Younger groups have grown up with diversity as a social norm; but what can be done to bridge the generational and geography gaps to their parents and grandparents?

Social attitudes have changed significantly over time. Only three per cent of people now say that you have to be white to be ‘truly British’, and 93 per cent disagree, while 10 per cent of people saw being British as racially exclusive a decade ago. Most peo­ple have nuanced views on race, and consciously try to uphold anti-prejudice norms. Yet it is much more common for people to slip back into using casual stereotypes for whole groups that they have very little or fleeting contact with. That was once the case for the Irish, for Indians and Afro-Caribbe­an migrants in the 1970s. That social distance re­duced. It is more common, now, when people talk about Muslims, East Europeans, and especially about gypsy, Roma and traveller communities.

Neighbourliness is not enough, though it has been on the rise during the lockdown. The every­day experience of living together provides resil­ience, especially in more diverse cities. In British Future’s research, casual stereotyping of “out-groups” was consistently heard more strongly 15 miles down the road from places of high diversity; for example, when looking from Kidderminster to Birmingham, or into east London from Basildon in Essex. People are much less likely to talk about black people or about Muslims in “them and us” terms as a group that sees the world differently if they know people from those groups.

So this Black Lives Matter moment will have been seen differently in different places. Those three simple words express anger at the murder of George Floyd. Many see an urgent movement to catalyse change. Others, seeing culture wars over statues, worry that this will polarise groups more into “them and us”.

A lack of contact can create misunderstandings too – as Middle England wonders why removing statues of Winston Churchill will make anything better at the same time as many of those campaign­ing for change are frustrated by the media’s focus on symbolism over substance. To make this a mo­ment of sustained change, we will need to create more space to talk and listen to each other too.